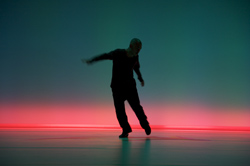 As part of the Melbourne Festival 2010, creator and performer Hiroaki Umeda has brought his show Adapting For Distortion & Haptic to Australia, from Tokyo. Hiroaki was a photography student when he became interested in dance whilst at University. His creativity and artistic vision is wonderfully presented in the first act Adapting For Distortion.

Those hypersensitive to auditory or visual input should avoid this show, however for everyone else it is a must see. The use of lighting and visual effects created a trance like show where even the slightest movement had fluidity and was enhanced by the way the light hit both the stage and Hiroaki himself.

The first act was a display of the performer’s hip hop and robotic isolations that was accentuated by the bar coded white lighting flashing across the stage. At times the dancer and lighting became still, yet there was still subtle movement in the ripple of light across the rise and fall of the dancer’s chest. At one point in this act, the lighting played tricks on my vision and it was as though I was watching a 2D screen with a 3D image in the centre of the stage.

Hiroaki needs to be credited with his ability to foresee such visions and shapes that can be achieved through lighting, design and the body.  He also has an incredible ability to bring his skills in video projection and computing to life on the stage.

The soundtrack for this act and the second were extremely distorted and can be described almost as an alarm clock on the background of a chainsaw and distorted radio. It was loud and at times surprising – not for the faint hearted.

The second act Haptic was described as a performance focusing on ‘the physical aspect of the perception of colour, not simply to show it, but to give it substance to the relationship it has with dance’. Examples given were; red/anger and blue/reassurance.

During this act the stage was simply covered with blue, green or red light. I have to admit that I was unable to see any clear relationship between the movements of the dancer and the colour, nor any highs or lows in the choreography or soundtrack. The choreography didn’t seem to alter much from the first act to the second, yet the second act did not have the lighting effects to add highlights and alternatives to the choreography alone. At times the movement seemed to move through the music rather than with it. This was only noticeable as the music and choreography were sharp and isolative, and I felt they needed parity to achieve the greatest impact.

This show had only one performer, and I think Hiroaki successfully held the audience’s attention for its duration.  It was a unique experience for the audience and an impressive example of one man’s vision, imagination and creativity.