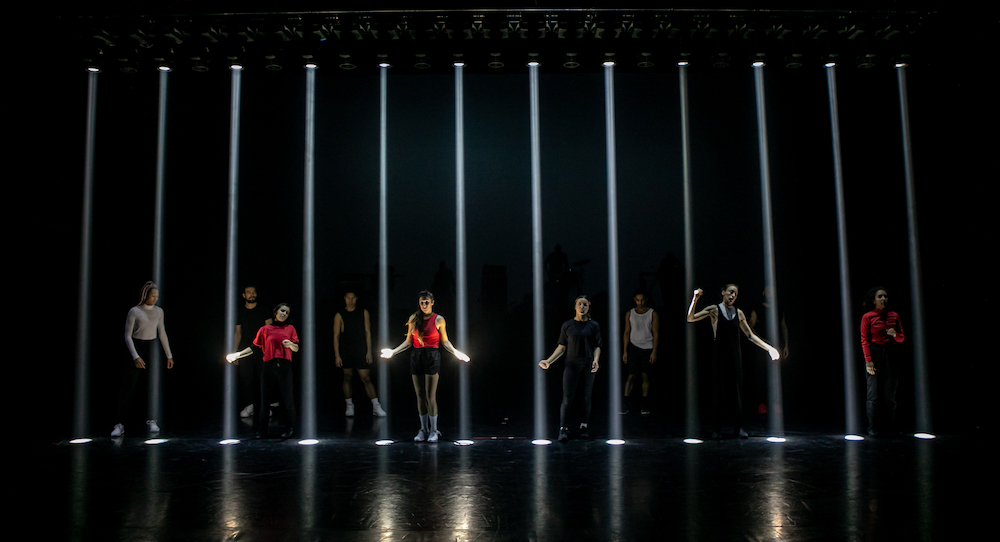 Canadian avant-garde choreographer Dana Gingras and her troupe, ​Animals of Distinction, premiered their intense socially engaged work ​Frontera​ to Australian audiences in the 2020 Sydney Festival​. Amidst the bushfire smoke haze that enveloped the city outside, inside the theatre mirrored this with its own combination of smoke, haze, strobe lighting and lasers.

Frontera​ is a work that explores the ways that new technology is increasingly used to define frontiers, create borders and barriers to human engagement, and to monitor and surveil human bodies. The work starts with ubiquitous performers walking and backtracking in gridlike formation on a huge backdrop of darkened space. Then I fell asleep because not much was happening and roused myself intermittently…

This obedient walking in single file formation soon gave way to the dominant style of the piece – a kind of frantic running across the stage before the performers would freeze and then collapse into a sort of collapsed breakdance. Imagine a ‘parkour’ runner/breakdancer who is descending into a nervous breakdown.

And we certainly see why. With a dystopian landscape where the performers are dwarfed by the giant laser beams, highly powered floodlights and industrial scale scanning equipment, they are constantly being followed with intent to be trapped. There is a constant battle between man and machines as the performers run from and to, all corners of the stage trying to escape these coldly efficient devices.

The soundtrack for this dystopian landscape is an incessant industrial sounding rock that is played live by the experimental rock band ​Fly Pan Am. It was a strange sensation to listen to a mechanistic driving rhythm of the work only to discover that there was a love band of five musicians in the background. They played a dark atmospheric and relentless score that drove the performers but didn’t seem to inspire any creative engagement from them as dancers. Perhaps that was the aim of show – music as the unremitting taskmaster.

The frantic running of the performers soon gave way to the performers gathering into a singular body as they froze and then broke into a kind of slow motion swaying on the spot that reminds one of underwater sea plants on the great barrier reef. As the performers continue behaving as a single body seeking warmth of the hive, a giant scanning device above is continuously scanning their movements from above. It was certainly a chillingy image. However, without any variation or surprise, no light or shade, the segment becomes long and more than a little monotonous.

It seems that the real star of the show was the visual concept and scenography by ​United Visual Artists​. Their use of laser and floodlights was intelligent, precise and conveyed the brave new world of our digitally networked world of electronic borders. By constantly cutting and dividing the stage into grids and barcodes they forced the dancers to interact with these waves more often than they interacted with each other. Dancing or performing in this landscape was intensely singular and isolated and although there were several bodies onstage they behaved throughout the show as isolated figures in a lonely crowd.

Frontera​ is an intelligent exploration of the dystopian possibility of our technologically dominated future. While it mirrors and expresses the ever present themes of techno anxiety, its pessimism and engaging in themes of individual oppression renders their work long and monotonous. There was little surprise or sense of creative hope in its dancing. Without the performing spark that exists when people perform together and respond to each other ​Frontera​ can seem like a collection of automatons blindly reacting to an oppressive environment like caged animals.