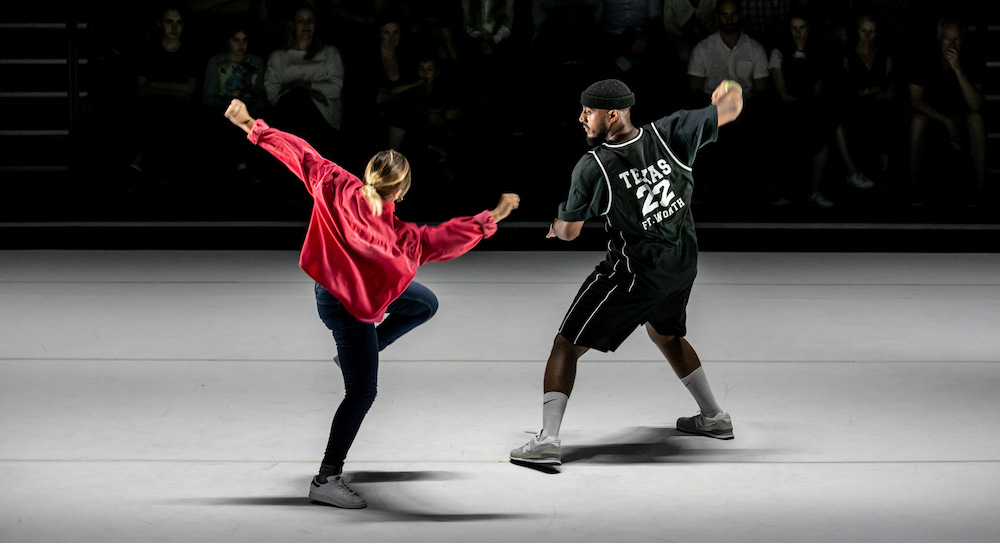 Two Crews​ is a celebration of the intimate roots of hip hop’s global culture. As hip hop spreads its cultural influence, original b-boy Nick Power’s production highlights its origins of breakdancing crews who confronted and challenged each other for territorial supremacy and bragging rights.

Like his other works, ​Cypher ​and​ Between Tiny Cities​, Power likes to get his performers off stage and bring the audience amidst the dance battles. In ​Two Crews, it likewise divides the audience themselves into two spaces like a tennis court each half confronting the other crew and their supporters.

The two crews themselves are the French all-female crew, ​Lady Rocks​, and Sydney based crew, ​Riddim Nation​. No glam, just the old time battles, a group of b-boys and a group of b-girls each determined to show their dancing prowess, strut their stuff and gain supremacy of tonight’s dance space.

From two corners, the crews eye each other off; there’s no aggression, just the anticipation of who would make the first move as they circle in their corners, testing each other’s preparedness. There is a curious mix of dance based adversarial confrontation and cooperation between the two groups like the showy combat of professional wrestling.

This dynamic rivalry is what Power’s performers actively tap into – the original rituals and culture of hip hop. Power wanted to move away from the more individualistic commercial breakdancing that is so prevalent today and return to the origins of old-school breaking crews. Making moves, trying new moves with no threats, no overarching bureaucracy or business managers, just two dance entities getting together to have fun, copying moves and getting the crowd engaged.

Lady Rocks​ are veterans of the France’s lively hip hop and breakdancing culture, specialising in a top rock dancing style that focuses on the upright body rocking rather than the floor-based gymnastics. While happy to challenge the masculine dominant b-boy crews on an equal footing, they have cultivated a more feminine style to their top rock dancing.

Riddim Nation​ represent Sydney’s diverse multicultural community with dancers from the Pacific Islands, Africa and Asia. Their style is a mix of hardcore street jamming competition based moves, incorporating details from their individual ethnic traditions.

We can see this in the performance by Gabi Quinsacara, who incorporates the lyricism of Polynesian dance with electro top rocking to eye-catching effect.

The audience themselves can’t help but take part as there were enough representatives of the local hip hop community to get into the rivalry – clapping, whistling, hooting to encourage the crews. The crowd actively comments and critiques the dancers when they pull off a power move and gain an edge on their opponents. This rowdy feedback is something many contemporary dance troupes try to achieve with their “audience participation” choreography, but it just comes naturally to these street dance aficionados.

The music by Jack Prest resonates like an Electro clock mechanism, and the lighting is simple but effective thanks to Matthew Marshall.

A tightly reigned show, just under an hour, ​Two Crews​ is a raw and unedited slice of b-boy street culture that Power with ​Intimate Spectacle ​has been creating and curating for several years. For audiences at SYDFEST 2020, the highlight was the infectious energy of both crews and rowdy unfiltered audience engagement.