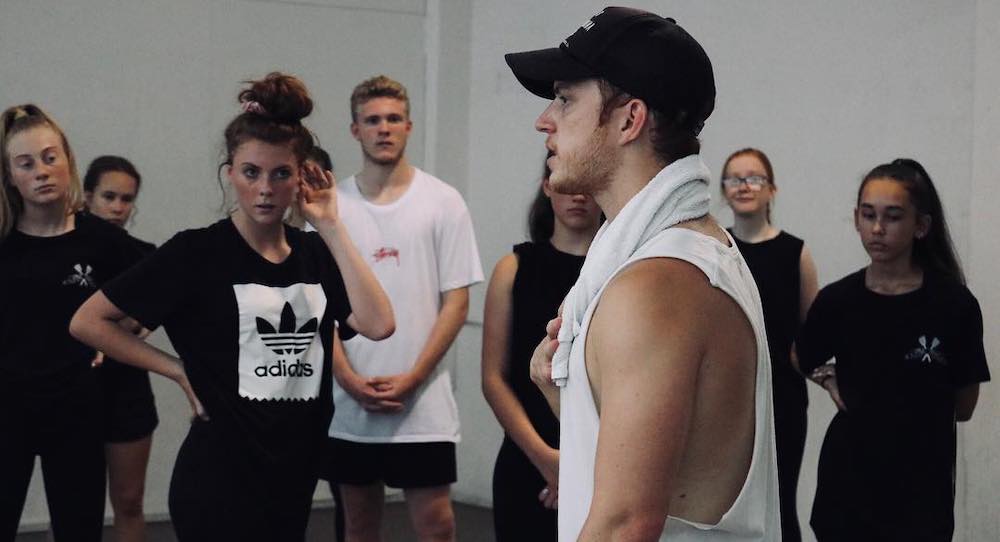 For the third year in a row, brothers Tom and Jack Egan are taking their tapping skills to cities across Australia, delivering a packed schedule of workshops and masterclasses via the increasingly popular Forge Tour. With a goal of educating dancers at all levels about the history, technique and performance aspects of tap, the program is coming to 12 key locations in January 2020. Dance Informa spoke with one half of the duo, The Forge Tap Project’s Founder Tom Egan, about why preserving the artistry of tap is so important, and what dancers can expect from the upcoming tour.

Tom and Jack Egan share a passion for tap that’s inescapable. Their mother ran a dance school, so they started dancing early, but an injury at age 20 sent Jack on a different path – toward a Master’s degree in Physiology. Tom’s dance career has been more conventional; after training, he started performing in shows like Fame the Musical, Singin’ in the Rain and, most fittingly, Tap Dogs. His passion for tap was actually ignited as a teenager, he tells us.

“When I was about 16 or 17, I went to a tap festival in Melbourne, and Jason Samuels Smith was the headliner,” Tom recalls. “I saw him, and I decided to train every day for the next six years, until I was his age, so I could be as good as him. That encounter started me on this path to working really hard at my tap.”

Tom has since established his own show, The Tap Pack, so successful that it has just returned from a season in London’s West End. His brother has also been involved in the show, having returned to tap post-recovery from his injury.

Amidst his personal achievements, Tom decided he wanted to give back to the dance community. “A few years ago, I decided I wanted to do a project that would help get young dancers into tap, and give the kids who already loved tap a place to go and train,” he says. “I felt that at every dance school – and there’s now hundreds of them – there was usually only one kid who was really inspired by tap dance, and obviously the school can’t offer a large amount of classes for that one child. So I thought, ‘Why don’t we take that one child from every school and put them in a group where they can really grow their skills?’”

And so three years ago, The Forge Tap Project was established. The premise is simple – a series of one-day workshops at key locations around Australia. Tom and Jack spearhead most of the tour dates, often bringing a third mentor along to round out the faculty. “We’ll do several classes between us, and the focus of what we do is heavily influenced by tap history and the roots of tap,” Tom explains. “We bring in the names of the tap dancers who came before us, and we also focus on the rhythmical and technical elements of tap.”

This year, each tour date will culminate in a performance for friends and family to attend. “The performance element is new for 2020,” explains Tom. “Last year, we did a small demonstration, but this year, we’re doing a proper set involving some traditional tap pieces like the Shim Sham Shimmy or the Eddie Brown Chorus, and also some new choreography that we’ve created. Parents are welcome to come and watch. Feel free to invite your grandma, your uncle, best friend and whoever else wants to come. It’s a completely open event, and we hope that everyone will bring lots of people. I think it gives the kids a taste of what they’re working toward and something to inspire them. It’s something that gets left behind at a lot of dance festivals. If you’re not showcasing tap performances, it’s hard to get the kids inspired.”

For those who are intrigued by tap but want to know more, Tom recommends watching throwback videos of the greats. “When I was at that tap festival as a teenager, I had never seen the Nicholas Brothers before,” he says. “There was a video of Stormy Weather playing on a TV there, and that’s a great video to watch. If you’ve never seen the Nicholas Brothers before it’s a must. Look at Gregory Hines, Buster Brown, or female dancers like Eleanor Powell and Jeni Le Gon. And of course there’s great modern tap dancers today, like Sarah Reich and Jared Bryan; they’re all names I throw out for students to watch.”

Tom’s commitment to educating dancers about more than just tap technique is evident. Moving forward, he hopes The Forge Tour will reach more regional areas and give even more young dancers access to his workshops. “There’s one kid who lives quite far from Byron,” Tom says, “and he has to travel three hours to go to the Gold Coast workshops, so I specifically put those on last year because I knew he was coming. It’s those sort of kids I really want to get to, because he’s in a rural area, but he’s so inspired by what everyone’s doing, and he just really loves tap. He flies all the way to Melbourne to do the tap festival every year, and one of the goals of this project is to get to kids like him, in areas where they maybe don’t have access to tap but they love it. There isn’t a lot of information out there for tap, but the kids who do love it are more passionate about tap than ever before, which is really promising. So it’s great to have a place for these kids.”

For those who are truly dedicated, the Egan brothers run another initiative under the umbrella of The Forge Project. Tom leads a youth ensemble in Sydney, and Jack does the same in Melbourne, offering talented tappers a chance to perform as a group twice a year. “This year, we did a remount of our work from last year, Swung Outta The Park, and then we’ve just finished doing our new work which is called Phat n’ Funky, and that’s going really well,” Tom explains. “It’s great to help the kids who are really advanced to grow their skills by working with them every week. I’m all about self-direction with kids, I think they’re smarter than people give them credit for, and I’m all for giving them responsibility over the material and making sure they know what they’re doing. So that’s another thing we do throughout the year.”

If you’re thinking about booking a place on the tour but unsure what to expect, Tom believes every attendee will walk away with a newfound love of the genre. “I think if someone has never experienced tap in this way – rhythm tap – if they’ve only stood at the bar doing shuffles or doing their tap springs down the room, this is really going to change their mindset about what tap is,” he explains. “It’s not this boring thing that your teacher wants you to do. Tap in itself is something amazing and beautiful that everyone can enjoy.”

For more details on The Forge Tap Project, visit the Facebook page here.

To book a place on the Forge Tap Tour, click here. Donations for the performance element of the tour can also be made via the eventbrite page.