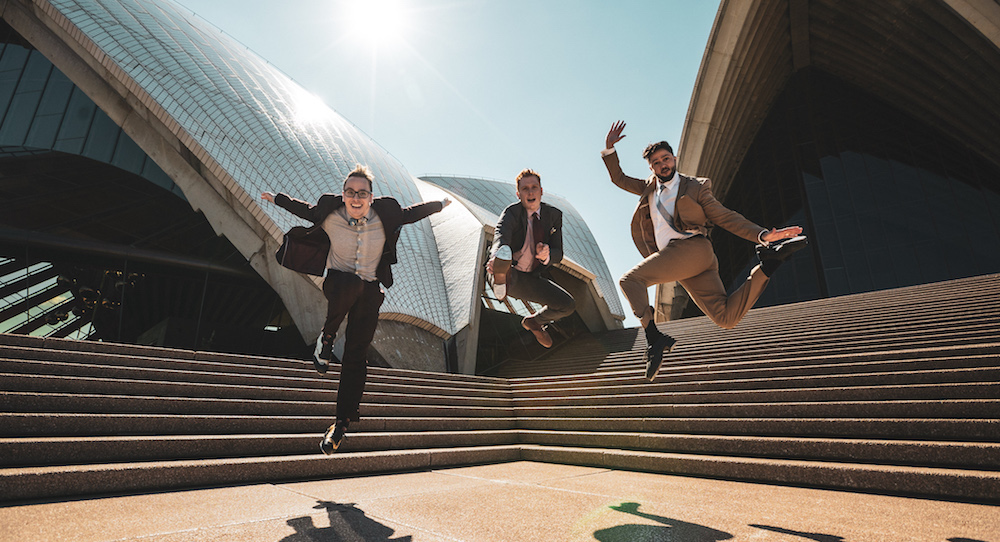 After a triumphant season on London’s West End, The Tap Pack is back in its hometown, preparing for its debut at the iconic Sydney Opera House. Created by Thomas J Egan, Jesse Rasmussen, Jordan Pollard and Director Nigel Turner-Carroll, this one-of-a-kind show is inspired by the legendary Rat Pack. Following a group of five Aussie mates, The Tap Pack is ready to entertain audiences with its witty banter and polished tap dance skills set to a blend of jazz, pop and swing that is sure to get your feet tapping along.

The Tap Pack Co-Creator, Thomas J Egan, explains that The Tap Pack takes the comradery and swing style songs of the Rat Pack and combines it with fast and furious tap dancing. “The Tap Pack is about capturing the five guys’ talents and stories, so you get a little piece of how each started dancing or what they love about music,” he says. “We’ve worked together for a long time, and so we’ve bottled up the comradery that we have and put that on stage, which is not dissimilar from the Rat Pack.”

As the name suggests, tap dancing is at the core of this show, and according to Egan, you can see tap in all its glory. “A lot of people say, ‘I wasn’t sure about a whole evening of tap, but we loved it and thought it was amazing.’ I think that speaks to how engaging tap can be,” Egan reveals. “We don’t just tap; we sing and have a lot of schtick in the numbers, and the stories are really heartfelt. We try and make it a real fun evening for everybody.”

The Tap Pack has not only taken inspiration from the Rat Pack but also from tap dancing legends. “We love watching old videos of Sammy Davis Jr, who was in the Rat Pack doing cabaret spots like ‘Me and My Shadow’ with a bowler hat and tap dancing, but extending beyond that, we love Fred Astaire and Gene Kelly, and I particularly love Gregory Hines, so we borrowed from different tap dancing greats. There is a number in the show called ‘Ode to the Greats’, which is a tip of a hat to the legends who have come through tap,” says Egan.

The performers also get an opportunity to showcase their creative side, improvising a few tap dance numbers to give each performance its own unique feel. “For my solo in the show, I was really influenced the first time I saw somebody improvise a whole seven-minute solo at a tap festival. I was really taken by the idea of improvising a whole number, so that’s what my solo is about. I start small and build it up. In lot of the numbers, we have little improvisations throughout, so every show is different, which keeps it fun for us,” Egan adds.

What also makes this show unique is the mix of old jazz standards and a modern twist on current pop hits. “We love the big band feel,” says Egan. “You’ll hear old jazz standards like ‘Can’t Take That Away From Me’ and ‘Fly Me to the Moon’, and then you’ve got the swung-ified numbers from Beyoncé to Bruno Mars, so we do a bit of old and new. We’ve made our own flavour of jazz with a big horn sound.”

The Tap Pack has achieved recent success overseas, performing on London’s West End, the Edinburgh Fringe Festival and also in Berlin, but for Egan, it’s a dream come true to perform on home soil at the prestigious Sydney Opera House. “This will be my first time performing at the Opera House, so I think it’s definitely very special for me. As a young kid dancing in Australia wanting to do the best that I can, to now play in such a premier iconic venue in Australia, it’s just a real feeling of accomplishment.”

When Egan is not performing in The Tap Pack, he’s busy inspiring the next generation of young tap dancers through The Forge Tap Project, a program that mentors 20 young passionate tap dancers. “A lot of dance schools can’t provide a massive amount of tap, as there’s not as much interest for it, so I started a group and auditioned 20 kids and got them in a room so that they could all train together every week,” Egan explains. “The theory was taking these kids who just love tap and giving them another opportunity to get inspired by awesome tap mentors, and it’s just grown from there into workshops as well.”

With The Forge Tap Project engaging kids to pursue their love of tap dancing and The Tap Pack showcasing our homegrown Aussie tap dancing talent to new audiences, Egan is excited for the future of tap dance. “I feel optimistic toward what is going to happen with tap in Australia,” he says. “People always say ‘tap is a dying art’, but I think that statement doesn’t really speak of what’s happening in the industry. It’s more vibrant, more creative, and there’s more passion in it than ever before!”

The Tap Pack is at the Sydney Opera House from 17 October to 4 November 2018. For more information and to purchase tickets, visit www.sydneyoperahouse.com.