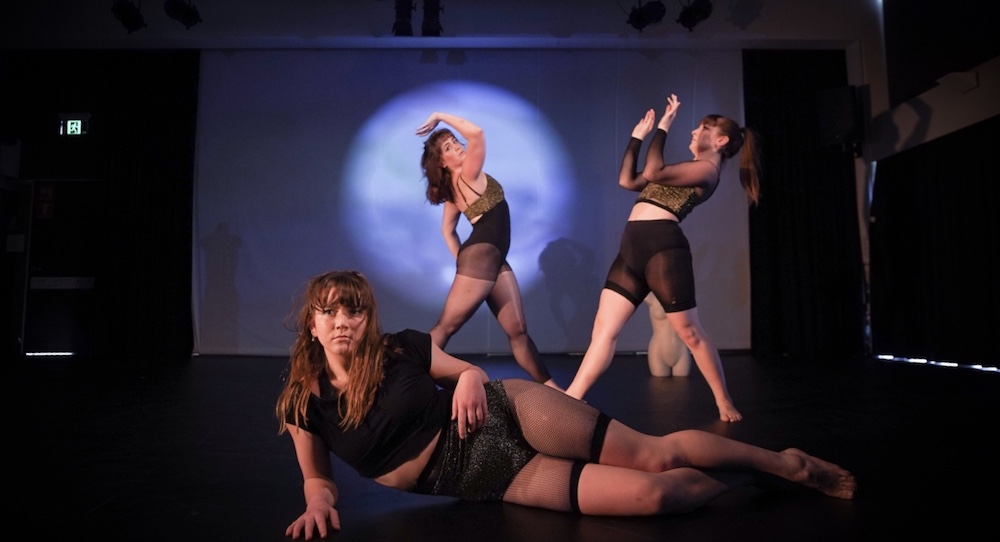 Sydney-based independent dance entity DirtyFeet, presented its much-anticipated annual emerging choreographer program, ‘Out of the Studio’, at the East Sydney Community and Arts Centre on the last weekend of September.

Two exciting new works were presented by choreographers Emma Harrison and Callum Mooney. The night was a feast of contrasting creativity, with both choreographers bringing their unique voices to the space to give a taster of their next works in development.

Harrison’s piece, Madonna, centred on iconic women throughout history, some whom we know, e.g. Madonna the pop icon, or Madonna the deity, and highlighting women with historical celebrity, famous and infamous. The work comments on society’s commonly held views and written record of these women. Harrison and team centred on questioning what is fact, what is fiction, asking themselves and challenging viewers to think about whether the folklore we know is the real story. This lent itself toward Harrison’s common thread throughout her previous body of work – our societal portrayal of the current woman, seen through this and other lens. There is comment on struggle with the pressure of the pigeonhole we have put woman in, and her need to maintain herself amongst the pressure.

There is much to be said for the way Harrison is bringing to life her common thread, with motif of style, structure and poignant thought on the woman’s view of herself, also as she is seen through others’ eyes. New perspective was given this time, with a far-reaching historical bent, through the Harrison signature of circular motif toward creating a final ‘woman’ product, trying to reinvent oneself, to find self back in the same place, only a bit rougher around the edges. Intense brooding stares, struggle to come out on top, working with, working against, complimenting, individualising were all central ideas.

Madonna centred around those without a current voice, asking how we can give them a new fresh voice, to be seen again, from a new perspective are all ideas that permeated the work. Madonna the pop icon was woven throughout, exploring her body of work in merging of the sacred and the profane, with Harrison exploring how this also plays out within the historical narrative. The work finished with a humorous tag, early ‘90s Madonna making an appearance, something to be integrated into the work at a later stage, Harrison stated in the Q&A session following the showing. A fascinating thought to be developed.

With what is a relatively short time frame (three weeks) to compile a work from start to finish, including collaboration with other media (in this case, musical composition with composer Luke Minness, and some exploration with projection), Harrison has a wonderful first draft to develop on. There is room for exploring new motifs, and new ways of telling the narrative that need to be explored, to delve deeper and further define her own voice.

Mooney‘s work, Cosmos, was the second work of the evening. There were many themes presented at the top of the work. The statement intended was ‘the three levels of consciousness’, although where this has been developed out of was not clear, making for a weak reference point. Contrastingly, the opening was spent speaking literally of human destruction and disregard for the earth, without much need for interpretation. This set the work up for a very unclear narrative. Mooney stated in post-performance Q&A that the opening was intended as awake consciousness; however, the opening theme set the work too strongly along a different path, making for disjointed narrative.

The choreography was stylistically easy and interesting to view, with good use of space, exciting casting and strong dynamic. Reflective of the uniquely Australian thrash and tumble style, there were notes of the current commercial contemporary dance styles. Woven together with the natural ease of the long limbed, powerful dancers who each have their own cross-genre background, the potential is great for this work to become something fresh and exciting once further explored.

There was a trend in this work toward literacy of interpretation, which lends itself to gimmicky theatrics. It will be good to see all the separated thoughts and concepts merged in a more cohesive and mature manner.

Mooney used projection as a collaborative force in this work, with projection artist Carla Zimbler, using ongoing geometric shapes and use of lighting as a fourth performer. There was a beautiful connection of lighting to movement, which is planned as future development and a strength of this piece. There was a beautiful moment when little lights held by the dancers were used to reflect a level of consciousness, one area that could be developed to strengthen the work. There are the beginnings of some wonderful experiences for the audience in the movement and projection concepts presented.

DirtyFeet’s Out of the Studio program is always an exciting opportunity to view the future of independent dance in Sydney, a space for choreographers to present their blueprints in a formal environment, and for audiences to appreciate the creative and collaborative process up close and personal, where space is given to live feedback and questioning. Both works, being in their beginning stages, are wonderful glimpses into Harrison and Mooney’s current projects, and something to look forward to for future viewing. We wish them all the very best with their future developments, and thank DirtyFeet for providing such a wonderful space for dance, collaboration and creativity.