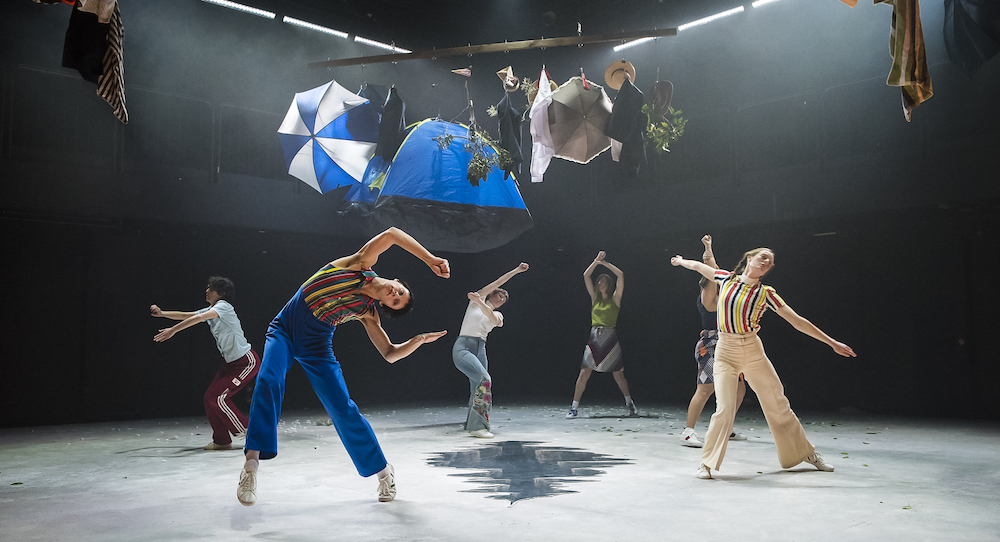 There is something altogether appropriate about ending in front of the television. On the day when Global Climate Strike events began here in Australia, a show about how societies and individuals grapple with ways to respond to the existential issues posed by planetary warming (and are, in turn, often paralysed by the perceived enormity of the task), is both timely and loaded. Thus, when after an hour or so of participatory theatre, cast and audience retire to the relative safety of the seats to stare at the glowing box, the entire, complex conundrum seems somehow distilled in the palpable relief of sitting. Sigh, clap, go home. Carry on as usual.

Sarah Aiken and Rebecca Jensen’s Melbourne Fringe work, What Am I Supposed To Do? (WAISTD), drives into the space where feelings of powerlessness, urgency and futility compete with righteous clamour, denial and, dare we say it, plain old complacency. Indeed, in the very texture and weave of its construction WAISTD draws us into a spiral which can seem inexorable, where our choice is corralled (or maybe choregraphed), and we end up as marionettes in a clap-a-long pantomime of looming horror.

The elephant with works like WAISTD is that they can drift easily into the spectacle of middle class moralising; another troupe of comparatively privileged dance artists lecturing us, evincing the pose of bourgeois guilt for a dutifully penitent audience. However, Aiken and Jensen have clearly reckoned with this; and rather than giving us a telling off they structure our involvement in the work in ways that are both obvious andcleverly subversive. Watching/participating, you are struck by how like a doomsday cult it is. What Aiken and Jensen have brilliantly hinted at is the primal thrill we all get from the disaster drama. The notion of apocalypse is luridly satisfying. If WAISTD had ended with an orgiastic catharsis of mass suicide it would have been almost as appropriate as the aforementioned television.

If you are wondering how this all maps out as dance; basically, with this show, we have to let that one go. Rather, this is a choreographed theatre happening, a sequence of events involving objects, catechistic chants, simple moves and a script reading. It’s a live time eco-horror show, (like the one outside), that draws its motifs from film, the ’60s avant garde, protest aesthetics, cult manipulation, and Armageddon stories like On The Beach. In a way, WAISTD is a mash-up of dramatic devices and crowd control techniques, and as such is a brilliant and nigh brutal mirror of our herd-like tendencies.

There will doubtless be those who take an ideological position on what Aiken and Jensen have done with this show, yet the deliciously layered construction of the work and the unresolved ambiguities are an invitation for us to respond with more nuance. The shift of focus from stage/performer to audience/citizen is central and, though possibly blunt, presents us with an opportunity to gaze upon the spectacle of our own response. Are we passive, afraid, immobilised? Do we care and, if so, what does caring actually mean? Moreover, what is to care? To do?

Of course, none of this is to suggest that What Am I Supposed To Do? will explode your world view, nor radically shift your notion of what dance and theatre can be. Aiken and Jensen have clearly allied their ambition to a perspective that says, in the end this is also a show. Another item for our cultural consumption. Sit down, watch telly. Coming up after the break, what the apocalypse means for you and your family.

And then, after the show, Aiken and Jensen drop us off, pointedly, right where we came in. Which is where exactly?