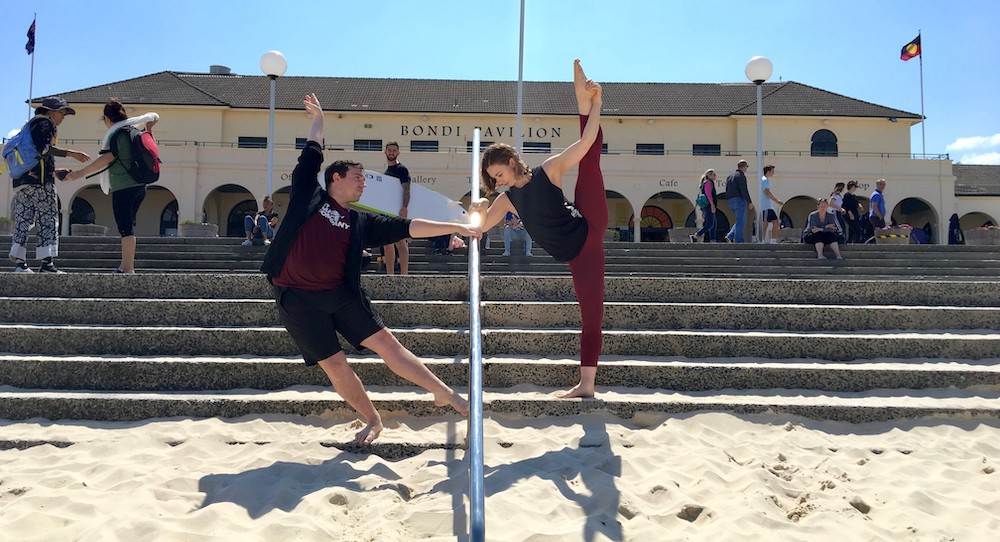 The school holidays are just around the corner, and is its usual custom, Sydney Dance Company (SDC) throws open its studio doors to provide a range of dance classes. From hip hop to classical ballet, jazz and contemporary, there will be something for everyone. Age is no issue either, with adult beginner classes in most genres and great teachers to get you moving and loving it!

Dance Informa had the opportunity to join a photo shoot with two of the SDC holiday instructors, Jamie Winbank and Liz Marcobello, down at Sydney’s iconic Bondi Beach. Both Winbank and Marcobello are independent dance artists who also teach regularly at the SDC studios.

Get to know Jamie Winbank

Jamie Winbank gives us an outline of his experience.“I have been an independent artist for about 12 years now, and I’ve been working full time in the arts industry in a plethora of different roles, which has been really exciting. In terms of my career trajectory, I’ve been an educator, first and foremost, and a youth arts’ practitioner, so that’s my background. And that’s kind of my main area of interest. But I’ve also created works, and performed works, for example, performing with Meryl Tankard in COD.”

Winbank has also worked with Legs on the Wall and has even done some dramaturgy, which he says was “really interesting, to look through the meaning of movement and find some kind of sense.” He recently came off a contract dancing in West Side Story on the Sydney Harbour stage, so we asked him about the audition experience and what it was like performing on the Sydney Harbour Stage.

“The Sydney Harbour Stage on Sydney Harbour is literally the biggest stage in Australia, and built on the harbour, which is amazing,” Winbank recalls. “And to work with Julio Monge, who had himself worked with Jerome Robbins, was pretty incredible. So there were a lot of insights into how the work was created, how the work and the choreography originated, and the meaning behind the movement as well. So for the performers, it was really an in-depth kind of first hand learning, or education into the beauty of West Side Story and the beauty of Jerome’s choreography, and then performing in that iconic location with an orchestra, it was magic.”

After the excitement of West Side Story, it was back to work for Winbank, including his regular classes at the SDC studios.

We ask what gives Winbank the most satisfaction when he’s teaching his beginners jazz class.

“I think it’s that moment when people think that they can’t do something, and then they kind of keep going with it,” he reveals. “And then they do it, and you see that elation and joy in their body. I’ve been teaching a few of the introduction, short courses, which is beautiful, because they’re there for four weeks, and you can see their growth and see their development.”

But the youth classes are completely different as Winbank explains. “You know, just seeing young people express themselves through movement is really magical, especially without boundaries or constrictions, an absolute openness where anything goes and everything’s kind of encouraged.”

During the Spring Workshops Program, Winbank will be teaching contemporary youth workshops at both Bondi Pavilion and the Ultimo Studios. “And I’ll definitely be focusing on that kind of freedom and liberation through movement,” he says. “Also looking at a little bit at how movement can have content or concept. So it’s a bit more than just 5,6,7,8 steps. And then obviously some technique work but mainly in the contemporary area.”

He goes on, “I am teaching a few different age groups, including the eight- to 11- or 12-year-olds at Bondi Pavilion, but then also the 14- to18-year-olds extended contemporary. So it’s a beautiful mix of different age groups. And both groups are open to any body who comes to the studio.”

Winbank is particularly excited to see what young men will come through the doors, both for the workshops and the open classes. “So it’s really exciting to be in a position where we can nurture young men coming through the doors and and providing a space where they can express themselves through movement.”

Winbank adds, “When I was younger, I used to travel down from Young, where I grew up, and I was the only boy who danced. And I would travel to Sydney to do a couple of days of workshops and then go back home. Amazing! And it’s so funny how it has come full circle, and I’m teaching now. It’s so lovely. But I think it does give kids a chance to expose themselves, like me, and maybe you as well. You might be used to your small studio. I also grew up in a small studio. And then you come to a workshop, and you go, ‘Wow! Who’s that teacher?’ And, ‘Oh my gosh, they’re my favorite now.’The staff are of the highest calibre, with a background in their speciality, as well as dance training. Yeah. You have something to learn from everyone.”

Get to know Liz Marcobello

For Marcobello, her regular classes include teaching the Tuesday night level two JFH. And then on Wednesday nights, the beginner hip hop class. During the holidays, she’ll be teaching at Ultimo both weeks for the spring school holiday workshops. The first week will be the 12- to 17-year-old range. And then the second week, she’ll have 10- to 11-year-olds, both in commercial jazz and jazz technique.

Marcobello explains some of her experience teaching. “I’ve been teaching a few intro to jazz technique courses with Sydney Dance over the last year-and-a-half. So it’s funny because adults and children can be completely different. Children are much more receptive to new information, and they can take it on very quickly. And that doesn’t mean to discourage adults from doing the work. It just means that sometimes you might be really keen on learning something, but you’ve put some walls up. And it takes a special teacher to be able to calmly talk you off the ledge sometimes. You can see a student’s eyes glaze over, and they’re like, ‘Oh, my gosh, this is so intense.’”

Having learned a lot about teaching over the years, Marcobello knows that with both adults and children, it’s important to calm people down. But then also getting them to find their inner strength, which pertains to their core.

“It’s the core first and then, find the neutral,” she explains. “Then we can start to build and learn the difference between turn out and parallel. There is no point flailing your arms and legs around if you don’t know how to first find your core. This is hard for kids. Kids are so much more energetic, talking about the core is very hard and even harder to get them to find it. Almost impossible. The majority, they just want to run around. And that’s great; we can use that energy.”

Marcobello structures her classes for kids by getting rid of all the excess energy and shyness in the first 10-15 minutes of class, which means running around a bit, jogging in a circle and perhaps doing a cardio warm-up to just loosen them up.

“And it’s then that the energy goes back down, pulling them back into my voice, and the task,” she says. “’Okay, guys, we’re going to be doing a nice chassé.’ And then, you know, making sure the form is right, because in all classes, safety is important. You have to be aware, you don’t want to throw anything out and you don’t want to be teaching a wrong position. It’s about, ‘Okay, when you’re coming down the room, stay in your little lane.’ All these little things like watching out for your neighbour.”

Outside of teaching at the SDC studios, Marcobello is an independent choreographer who has worked both commercially and with other companies.We ask her about what she has done as an independent artist. “So I have been working with the Dream Dance Company for the last two years. So I did Show Business with them, which is a course that they do over three months. Marco Panzic is the director, and he has another branch of the Dream Dance Company where they ran a course called Show Business for already established dancers in the industry, who really want to hone their craft, and segue into either performing more successfully, nationally and internationally, or becoming a choreographer. I was lucky enough to be given the opportunity to choreograph for that show, as well as obviously be a part of it. Aside from that, I’ve been able to choreograph for the Schwarzkopf Hair Expo. It was fun.”

And what’s her favourite style?

“I love jazz, and I did take up hip hop later in life, but originally I was a bunhead. Ballet, just ballet. But then I went to New York, when I was 20, and I took some hip hop classes there for the first time, and what better way to get your baptism of fire in that realm than being with the best and really learning from the greats. And it was a rude shock to discover how upright I was; I had to learn to loosen up. And then that fed my jazz because I was able to find the flow, and then the sharpness, which I already had.”

Marcobello adds, “So that’s always the advice I give to students who are saying, ‘I feel a little bit stuck.’ Diversify your style, go do a tap class, do a salsa class; you have no idea how great they marry with other styles. Yes, the beat of the rhythm, finding a connection with your foot. Because you’d be surprised. You can drill things with your feet in tap, right? And go to a hip hop class, and you’re doing a lot of house stuff, which has a lot of footwork as well. You’ll find the connection so much better with your footwork. So you can be doing West Side Story one minute and then dancing precariously down the Schwarzkopf runway in six-inch heels. So I know people who have jumped from one kind of style to another style. So it’s really important to diversify. Not only in classes but also what you go and see as well. Start with Sydney Dance Company, and then go and see something else so that you get to see people from a young age right through to actors, through to opera, through to classical ballet and contemporary. The more that you can see, the more that you’re feeding yourself and your knowledge of what your interests are.”

“Joining a class is brave and bold,” Winbank says. “You know, we remind everyone that even just showing up is a bold step. For every real person who is in the studio, there’s maybe 10 people sitting at home saying, ‘Oh, I’d love to go and do a dance class.’ So you know, it’s beautiful to get that happening. I also just want to add that I used to come down to Sydney from Young to do the workshops at Sydney Dance Company. Give it a go!”

The beautiful thing, as Marcobello says, is that dance is evolving. “So try something new. And that’s what we love to see with SDC classes, but particularly in the intro courses and the beginners courses – people who have never danced before. It’s really magical. See you in the studio!”