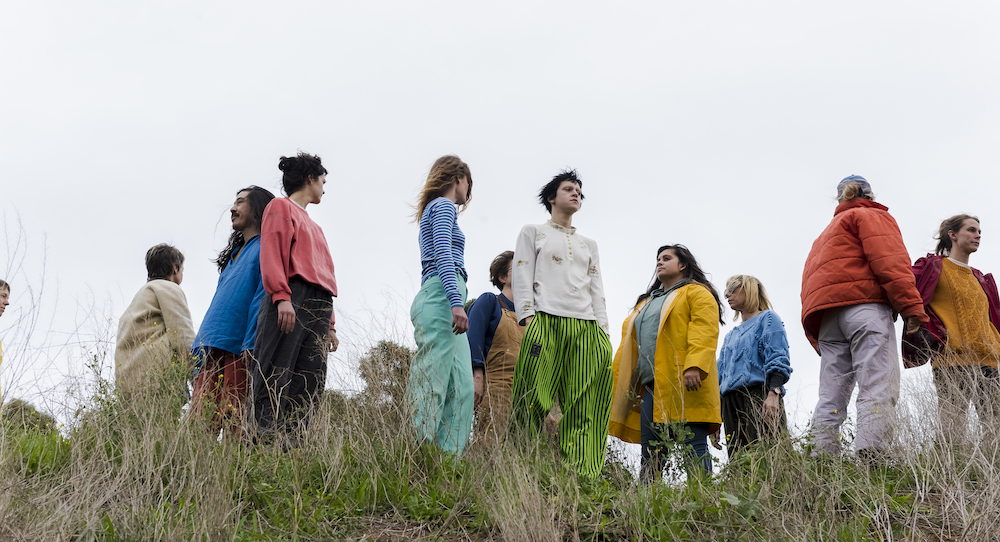 What am I supposed to do? It’s a question we all ask. We might be confused, scared or in denial, or perhaps waiting for clear direction. Either way, we often find ourselves immobilised; and it is this phenomenon, this freeze, that Melbourne-based independent dance makers Sarah Aiken and Rebecca Jensen will endeavour to ‘thaw’ when they take over the Fairfax Studio this Fringe for a weekend of participatory, theatrical horror.

Their new work, What Am I Supposed To Do? (or WAISTD) drills into the often febrile discourse around climate change and, in doing so, asks profound questions of us all. What indeed can an individual do? Is there a broader moral imperative at play? Is it okay simply to watch? Beyond that, WAISTD also examines the paralysing effects of doomsday scenarios and denialist ideology.

As Aiken explains, “I think it really is about how not to fall into either category. Do we just go on every day and ignore the future, or do we get consumed by the existential dread? Both of those things are as immobilising as each other. We spend so much time in that inaction, which isn’t because of a lack of good intention, but we’re just kind of stuck with nowhere to put our energy.”

If the so-called culture/climate wars (and the attendant info overload) have produced a ‘confuse-opoly’, how can the individual feel empowered in an ocean of noise? “When every attempt is countered with something that’s sending you back in the other direction,” Jensen adds, “it becomes really difficult to do something good, or to contribute to something.”

Thus, rather than straightforward enviro-protest, WAISTD is an enactment in miniature of what Aiken and Jensen call “an eco-horror.” By employing the device of participatory theatre and diluting the standard stage/seating, spectacle/onlooker boundaries, they are aiming at something both more nuanced and more troubling. As Jensen says, “I guess we’re interested in how we’re all complicit and how audiences can observe whilst being inside an action; or participate in something that they don’t have a full picture of. Maybe they don’t even know the endgame of their actions.”

Perhaps most tellingly, a beat later, she reveals, “We want the audience to have agency in a circumstance and setting that feels controlled by an external force.”

Here we arrive at a salient point — namely, the notion of being powerless. For some, this is a form of terror and constriction; for others, a comfort, an absolution. In this moment, the central question — what am I supposed to do? — becomes seriously loaded.

Taking the thread further, Aiken elaborates, “We’re interested in the relationship between participating in a theatre work and these kind of broader issues. You know, there’s this desire to help this machine function, to be a ‘good’ audience, but also not knowing what you’re supposed to do some of the time. It’s like that hovering uncertainty.”

Into the space occupied by uncertainty and vulnerability, WAISTD inserts motifs drawn from horror movies. Most notably, Aiken and Jensen were inspired by tropes in Australian films like Long Weekend and Razorback. Indeed, the participatory nature of the show hints at the ease with which our hard-wired herd instinct, and a cognitive bias toward ‘fear of the future’, can be coalesced into ritualistic, even cult-like outcomes.

“Going to a theatre is a ritual, as is going to a protest,” Aiken observes, “and I think the work we make can sometimes teeter into that. So yeah, it feels relevant. Maybe it’s an attempt to find some new kind of collective ritual that can help us feel less alone in our immobility.”

Part of the ritual, as it is in horror films, is the build. Yet rather, as Jensen suggests, “toward a climax that never happens.”

“I guess it’s that formula where we’re left waiting until just before the end for things to find their peak and resolve,” Aiken notes. “Thinking about that with regards to our experience with climate change, are we waiting for a hero to swoop in and save us?”

From a production perspective, Aiken and Jensen have also taken a big risk with their open-ended participatory model. Although (under the moniker Deep Soulful Sweats), they have plenty of experience working together and using similarly non-linear approaches to performance, What Am I Supposed To Do? comes with a bunch of unknowns.

“It feels like we’ve made really ambitious decisions with this work,” Jensen admits. Meanwhile, Aiken confirms, “At the same time, we never had a thought of just making a work on a stage.”

Presented as part of the Arts Centre Melbourne’s Take Over initiative, WAISTD brings the Melbourne Fringe to the mainstage, but, once there, it will seek to subvert and transform the normally delineated roles of dancer and watcher and, in addition, find a way to speak about climate change without lapsing into polarising chant. It may not look like straight contemporary dance, or even like a traditional show, but it may just be unnervingly – tantalisingly – like the world outside the theatre walls.

Sarah Aiken and Rebecca Jensen’s What Am I Supposed To Do? (WAISTD) will be presented at the Arts Centre Melbourne from 18 – 22 September. For tickets and more information, visit www.artscentremelbourne.com.au/whats-on/2019/dance/what-am-i-supposed-to-do.