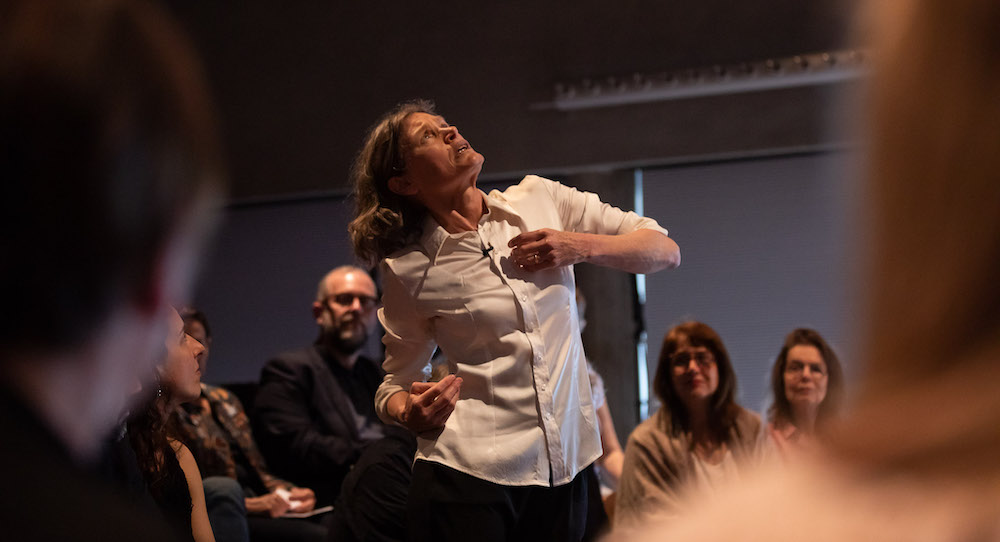 DIRtywork is a most strong and striking environmental dance/lecture by Australian dance luminary Rosalind Crisp, presented as part of UnWrapped at the Sydney Opera House. Crisp is an award-winning Australian dance artist and choreographer.

In this work, she examines the potential of choreography as a medium to embody, capture and connect with stories of environmental destruction. In some ways, it has possible hints of Butoh and Tess de Quincey’s Body Weather work. The foundation of Crisp’s work is her consistent solo studio research and her long-term collaborations with particular dancers and scholars. For over 30 years, Crisp has been developing a radical physical critique of dance, through dancing.

DIRtywork is Crisp’s response to her deep and discerning sense of loss and responsibility for the devastation of the country that has allowed her to share in the spoils of colonialism. DIRtywork has arisen from years of practice with DIRt (Dance In Regional disaster zones) — an ongoing research project with Vic McEwan, Andrew Morrish and Peter Frase. While there are no solutions or fixed results, this work-in-perpetual-progress dissects Crisp’s practice to reflect the volatile political and environmental crisis we are in.

The audience enters, and there are both small rows of seats and cushions on the floor.

Crisp wears a white top and black slacks and for the first section black shoes, but for most of the work she is barefoot.

In the opening section, at times, Crisp’s movements are sinuous, fluid and sculptural; at others, like Tai Chi, yet other segments see ‘broken’ wrists and angular elbows with high extensions – ballet movements are taken and reconstructed. There is a sense of enclosed verticality.

Then she is at times bent over, one arm extended behind her, and there are lots of backbends as if she is being pushed back in fear or carrying a heavy weight.

When Crisp talks to us, we learn of her love and link to the land and how she grew up on a sheep farm. One of her concerns is the effect agriculture has on the land and how we can preserve the environment.

In another monologue, Crisp, sitting on a chair in the audience, analyses how her body moves, revolving on demi pointe and ending with an arm stretched up.

The audience is encouraged to shift to a cleared space on the floor and lie down using the cushions, almost as if looking at the stars in the outback, but here it could be the lights of Sydney Harbour.

Crisp acknowledges the grand vision of the Opera House architect Utzon and, wearing a headlamp, ‘discovers’ footprints and other marks in the concrete, making this version of the work (it has previously been performed in Melbourne) site-specific. The tapestry design on the wall is focused on which takes us back to wool and sheep.

We then were encouraged to look at the lights on Sydney Harbour (the blinds for the windows only partially raised), and Crisp performs a shimmying ‘water’ solo moving around and through the audience reflecting on her love of dance.

Next, a short dance film of Crisp performing is screened — Crisp in a forest despairing rolling in the leaves as she melds with the landscape.

For the final, mysterious section, Crisp looms in silhouette as she performs a ghostly solo behind the harsh metal restraining bar under the concrete arc of the room. (An acknowledgement of indigenous peoples? The famous artists who have performed at the Opera House?)