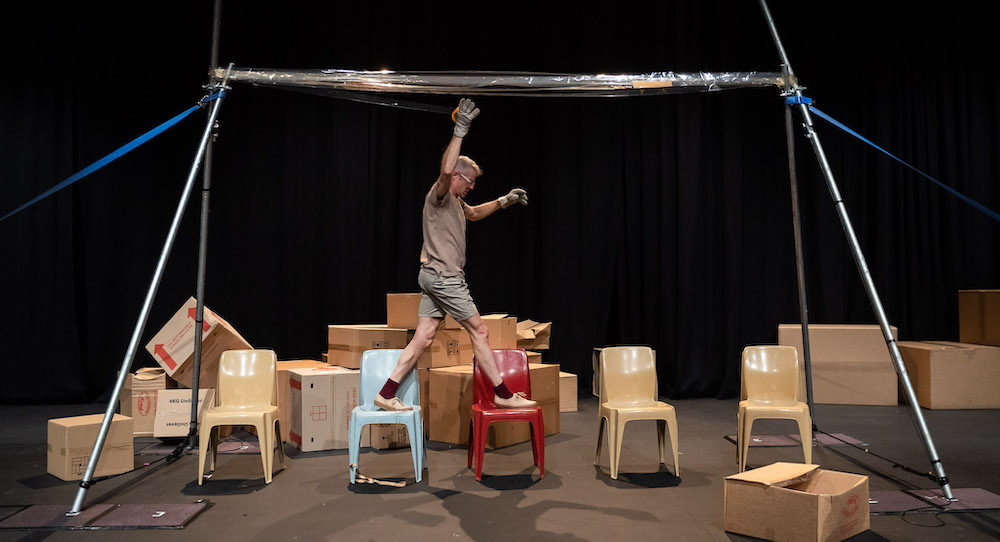 The main difficulty assessing this performance is deciphering in which genre it falls – theatre, physical theatre, art installation, contemporary dance or new circus? Wilson was determined to reject the labels of circus and physical theatre and declare that it falls within the contemporary dance realm. This is hard to understand considering there’s no ‘dancing’ or even movement except walking and little music. The main soundtrack of this work is arrhythmic squeaking of packing tape being unfolded and a sound loop of heavy breathing that most non-millennials will recognise from prank calls on old analog telephones.

The work opens with Wilson, the sole performer, lying on his back blowing up a balloon the size of an exercise ball. He does this nonchalantly for five to 10 minutes while the audience files in, and he continues until the balloon inevitably explodes with a climactic bang.

But what is one to make of this, as there is no virtuosity involved and no anticipation as one can see the eventual explosion happening; and there’s no real danger to performer or audience. This first act pretty much sums up the show’s other stunts: Wilson undertaking several low risk stunts using lo-fi disposable equipment that can be found in Bunnings and Officeworks, while performing without any discernible rhyme or reason.

At its best, ​High Performance Packing Tape i​s a type of absurdist theatre with Wilson physically exploring the inevitability of entropy in everyday life, how many of our dreams and life projects are nothing more than DIY solutions patched together with whatever material we have lying around. But no matter how stubborn we behave or how much we tinker with the materials, we cannot escape the inevitability of things falling apart.

The profundity of these themes could have been accentuated with a performance containing greater dynamism and perhaps other performers as well as a connection with the audience and some performing nous. Wilson performs the majority of the show determinedly poker faced with the demeanor of a disgruntled warehouseman who has a large express order to dispatch while his support staff have called in sick.

Unfortunately, the pacing and timing of the show was shaped by the main character’s strange casual fussiness. This meant that much of the show’s potential comic moments were lost or intentionally suppressed. In the scene when he intently attaches the squeaking packing tape to his body whilst hanging naked from a rigged-up piece of equipment, it is so fastidious that the punchline leaves the audience in a kind of awkward wait for the inevitable.

To imagine the show is to imagine an unhinged prop master at the Sydney Opera House who resents the accolades that the various actors, dancers and other sundry performers receive from the audience while he is relegated invisible to the backstage. He sends them home and commands the stage, determined to perform all his invisible backstage tasks on the mainstage, rendering the invisible visible.

This imaginary man also seems to be smarting from a recent inspection by the OH&S officer who has reprimanded him for inappropriate practices like overstacking boxes and using chairs and milk crates instead of the designated safety step. He seems determined (in his own mind) to show these inspectors that what he does is really low risk – like lighting a live flame in a warehouse, attaching himself with a harness made from packing tape and working naked without the proper high visibility wear. Unfortunately for him, it all seems to come unstuck.

By the end of the show, it’s hard not to have some new found respect for the fussiness of your workplace safety inspector. Unfortunately for Branch Nebula, its pertinent message of the inescapable reality of existential dread was lost amidst the clutter of the disposable material.