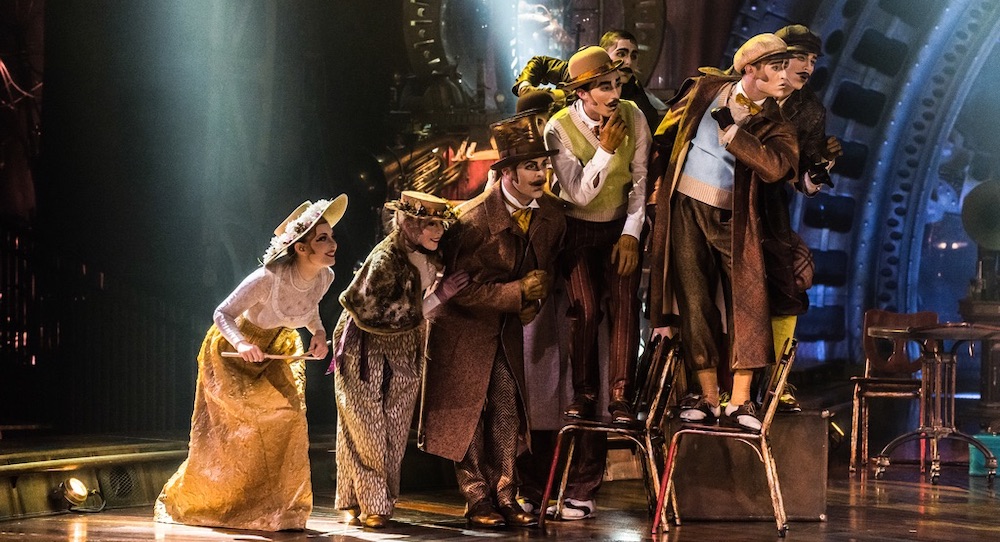 Cirque du Soleil, the internationally renowned practitioners of the Big Top travelling circus, returns to Australia in October. The company is bringing one of its most critically acclaimed productions, KURIOS – Cabinet of Curiosities, to premiere in Sydney on October 2, and will continue on its national tour, finishing in Perth in July 2020.

This Montréal-based company is in its 35th year of operation and will be bringing its huge production team comprising a 106-strong crew made up of 46 artists and 60 technical support staff. Cirque du Soleil’s shows continue to deliver a heady mix of excitement, wonder and imaginative creativity to over 60 countries.

The current production, KURIOS, is no exception, with the critics raving that this is one of Cirque’s classical works that returns the troupe to the apex of the international performance totem pole. On its premiere in San Francisco, the San Francisco Chronicle called it “the best Cirque du Soleil show in a long time” and marvelled how KURIOS had “concocted a dark and mysterious world that eschews the brightly colored eye candy for which the French Canadian juggernaut has become famous.”

The show’s primary creator, Michel Laprise, explains how this magical steampunk extravaganza was inspired by the scientific advances of the 19thcentury, combined with the science fiction literature of that era which imagined and envisioned a brave new modern world. It was the world of Jules Verne, the 1900 world exhibition in Paris, the Eiffel Tower and the emergence of electricity’s transformative power.

“I started to dream about a scientific man who has invented a machine that acts as a portal; he’s using electrical energy to go through the portal to another dimension where all the dreams are waiting for someone to take them up on earth,” Laprise explains. “I was researching electricity, invented in the 19th century. I fell in love with that era because I could see how so many inventions were about bringing people together like the way internet and mobile phones do today.”

The stage of KURIOS is a whimsical imagining of Cabinets of Curiosities – the ancestors of museums – also known as Cabinets of Wonders in Renaissance Europe. The stage set is an intricate clockwork portal of marvels that unfolds before our astonished eyes. Laprise says that while they were inspired by the aesthetics of steampunk, Cirque’s version of steampunk “is like no other steampunk in the world. We do it with our own signature, it has to be wild, it has to be more free.”

A big part of achieving that bold signature look is achieved by Cirque’s amazing costumes. All the costumes are imagined and handmade by the company involving sophisticated body scanning for each performer, with complex performance makeup that takes on average two to three hours to apply before each show.

The KURIOS costumes are a wild array of zany steampunk-inspired mechanical-futuristic characters, including Mr Microcosmos, Nico the Accordion Man and Klara the Telegraph of the Invisible. Mr Microcosmos, the embodiment of technological progress, is a serious fellow who evokes the steam train, the Eiffel Tower and the Grand Palais. This man is a microcosm who runs on his own steam and travels in his own self-contained, self-subsisting ecosystem. His ‘bigger is better’ ethos contains Mini Lilli, his alter ego in miniature.

The inventiveness of Cirque’s artistic development can be seen in its acronet act, which is a kind of super trampoline that allows them to bounce and jump 10 metres into the air. Acrobat Ryan Shinji Murray says that the original inspiration came from “some problems with the flying trapeze net in Zarkana, so we sent some engineers to look at it, and that got them thinking, ‘What if we took this problem and modified it a little and made that bouncy net bouncier, using material that would give more rebound?’ They took that idea away, did some research and gave us the acronet, and so we had to create an act on it.”

Murray recalls how this new act, which combines “flying trapeze with trampoline on steroids”, is a different experience altogether. “Our coach who is an Olympic trampolinist got on the net, and he thought he would jump 10 feet high, but he only got up to a couple of feet and was terrified, so even for a person like him, it was a completely different experience.”

After shows inspired by cinematic blockbusters (Avatar/Toruk) and Michael Jackson (One), KURIOS seems like a return to the authentic historical traditions of the turn of the century circus. Amidst the flying trapeze, Rola Bola balancing act, contortionists, jugglers and the aerial bicycle, the theatre of hands is a poetic theatre that comprises an artist telling a story solely using his fingers. This miniaturist act is the work of Nico Baixas, whose parents were both deaf and their manual dexterity led them to becoming puppeteers. His mother developed this hand puppetry using her fingers and developed several acts that Baixas continues to perform. “To be able to learn and continue this family tradition is important, and it is one of the traditions of circus,” he says.

For Laprise, KURIOS is built on not only the physical spectacle of circus acts but also on the show’s striking characters. For example, the role of Mini Lilli’s character role was “to convey the tiny fragility of dreams, but it wasn’t only about her height; it was about the sparkle she has and the spirit she has…this timeless Hollywood presence,”

Cirque du Soleil’s KURIOS will run at The Entertainment Quarter in Sydney, from 2 October – 24 November. For tickets, head to www.cirquedusoleil.com/kurios.