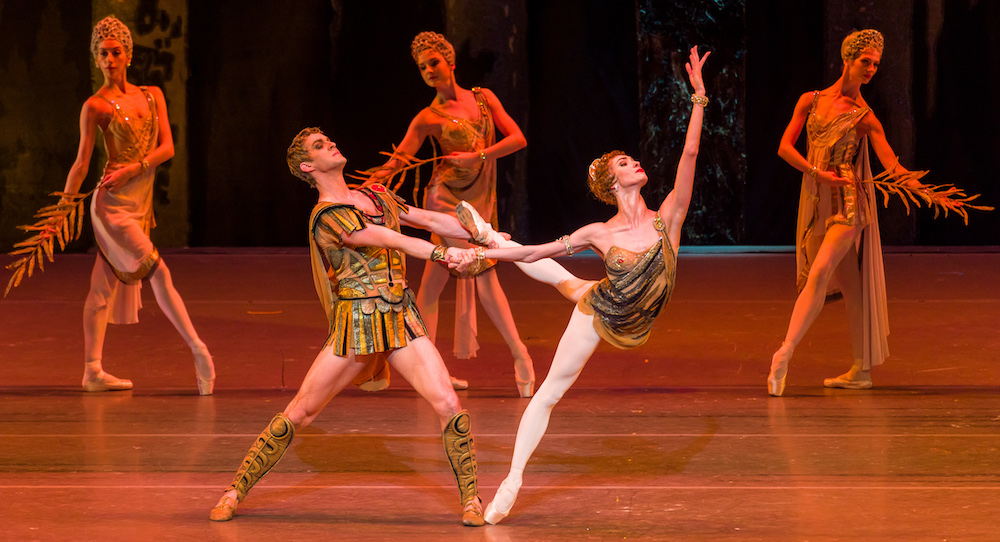 QPAC’S decision to return the Bolshoi Ballet as part of its International Series is a masterstroke, benefitting Australian audiences on many levels.  In Spartacus, the aptly named Bolshoi (big) Ballet is ideally placed to perform what is a huge sprawling work that demands a unique understanding between the massed corps de ballet and the principal dancers. One also feels that the Bolshoi is one of the few companies with the athletic capacity to do justice to what is a masculine testosterone-charged work, closer to a rugby match than a ballet.

Spartacus is the story of the rise and fall of a slave rebellion during the Roman Empire. It’s an epic production with three acts and 12 scenes.  Unlike the majority of ballets with the primary drive being Romantic love, the universal drama of Spartacus is the grandeur of war and revolution.

On the QPAC stage, the Bolshoi gives a bravura performance of this singularly martial ballet. It exudes the masculine energy of the choreography, and the company is in its element performing on such a grand scale. Whether it’s scenes of military invasion, decadent celebrations, rebellion or ambush, the Bolshoi is happy to fill the stage with dancing bodies that perform with dynamic and intelligent grace.

Spartacus is a ballet that demands much of its corps to provide a dynamic counterpoint to the lead dancers. Reminiscent of an old MGM Hollywood spectacular, the battlefield and military scenes that constitute a large part of the ballet needs the corps to perform bold, action-packed and militaristic precise lines. And despite Spartacus being a dance on a battlefield, the Bolshoi corps performs with unerring grace.

Unlike Giselle and Swan Lake, ballets that have iconic set pieces for the corps, the masculine spirit of Spartacus demands much of its male dancers with a number of scenes akin to a sporting match with over 20 male dancers on stage. The Bolshoi’s athletic corps is impressive in conveying contrasting elements; the heady energy of rebellion and the strict demands of authoritarian order.

The lead dancers give a commanding and mesmerising performance. Igor Tsvirko as Spartacus was pitch perfect as he moved from reluctant hero to taking on leadership of the rebellion. His leaps, with their incredibly elongated “hang time”, give the impression of striking in mid air, while his graceful and effortless one-handed lift of Phrygia, belying his strength, creates an image of pure beauty.

Olga Smirnova gives a mesmerising performance as the courtesan Aegina, the production’s beguiling femme fatale. Her feline grace was a sustained temptation for the gladiators, as well as the audience who fall in love with her — those long sinuous arms recalling mythical temptresses (Eve, the Gorgon and Salome).

These stars are ably supported by Alexander Volchkov as Crassus, the leader of the Roman army. Most impressive was the arch restraint in much of Crassus’ performance that goaded and challenged Spartacus. His quiet strength highlights Tsvirko’s ballistic strength. Margarita Shrayner as Spartacus’ sweetheart Phrygia gives a studied performance that showcases the dual nature of Spartacus’ sensitivity and strength in their pas de deux. It was interesting to watch the ballerina play second fiddle so as to highlight the virtues of the male danseur.

Simon Virsladze’s set and costume design were a marvel to behold. The use of various weaponry creates an increase in scale, and seems to accentuate the dancers’ lines making them larger than life. It is noticeable how rhythmic the dancing is, especially in the way weaponry is used. Of particular importance to the set design, with a large number of dancers on stage, is the use of vertical space – elevated platforms, a pedestal and a wall of shields. This intelligent use of vertical space accentuates the scale of the dance without overcrowding, culminating in the dramatic execution of Spartacus in midair.

Aram Khachaturian’s score is played with a determined sensitivity by Pavel Sorokin, which emphasises the musicality of the Bolshoi dancers. This is especially noticeable in the folkloric dances of the shepherds and shepherdesses that are performed with innocent and joyful élan without descending into trite sentimentality. It is also noticeable as to how much of the effortless strength displayed by the principal dancers is the result of their unerring musicality rather than pure physical athleticism.

When the Bolshoi performs Spartacus and other central works in its repertoire, it becomes inevitable that comparisons with other companies will be made. With its historical background, Spartacus is made for the Bolshoi, and other companies may struggle to do it justice. In the recent Spartacus revamp by Lucas Jervis for The Australian Ballet, for example, the determination to make Spartacus a “lover not a fighter” drains the dance of its central dynamic of a fight for freedom.

The Bolshoi production of Spartacus is a fight to show that fighting and dancing are not mutually exclusive activities.