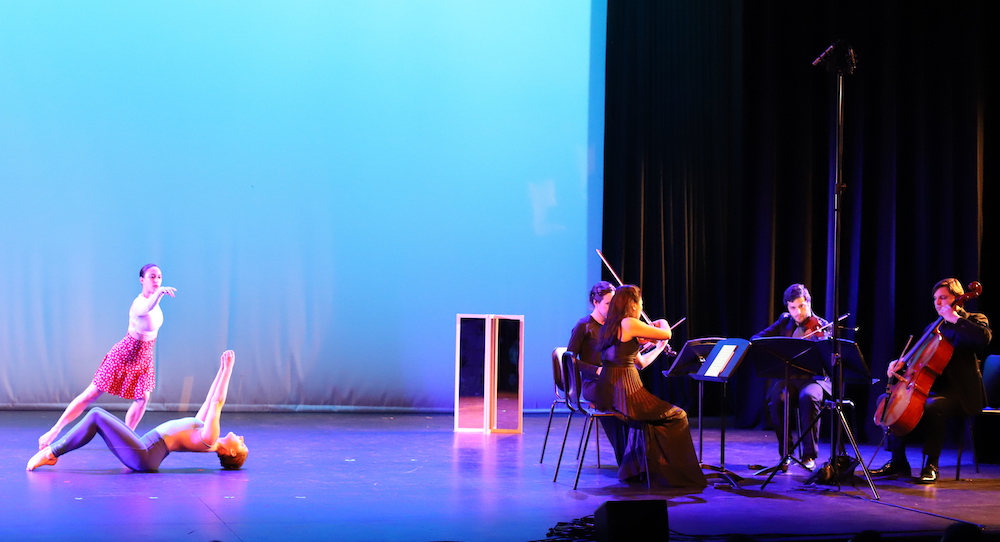 The production of Elements Of sounded most exciting on paper but was perhaps disappointing in the final product presented.

Artists By Any Other Name, based in New York, brought us its production entitled Elements Of, which supposedly is “an immersive exploration of the latent emotions in the seemingly mundane.’

The quartet of musicians was on stage the whole time, moving at various points to different positions. There was a plain white cyc back cloth (with dramatic lighting at times and also some colour washes). Much was made of the four mirrors that were also used and moved around – reflections of our inner selves? Reflections like the mirror in a dance studio? The audience as observer?

Musically, it was terrific (although the acoustics perhaps needed adjustment – the huge standing mikes helped but only to a certain degree). The quartet played magnificently assorted works, including a selection from Phillip Glass‘ Company String Quartet (no. 2) Paul Hindemith’s First String Quartet in C major, Ursula Mamlok’s Second String Quartet, Jennifer Higdon’s Sky Quartet and Caroline Shaw‘s Punctum. At times, the music was sharp and spiky; at others, it was relentless, repetitive and driven, sizzled and pulsated, throbbed and hummed or, in contrast, was far more lush, haunting, nuanced and eloquently passionate.

Costumes were generally simple, mostly in clean lines and solid colours, with sometimes a unitard look, others with a long flowing skirt. The leggings for the last piece were, I am afraid, most unflattering.

Choreographically, Elements Of was abstract, at times repetitive and predictable, and perhaps reminiscent of Cunningham performances of the 1960s. There was use of the Graham contraction, lots of floorwork and rolls, with some unusual partnering and lifts. Particularly in the first work, there was a sense of heaviness and weight in the shoulders. At times, it demanded a very supple and flexible back. Long stretched arms were used, as well as ‘windmill arms’, contrasted with sinuous rippling arms, some flickering hands and angular elbows and diagonal jumps. Some very controlled slow adagio was also included, and at various points, there were sculptural pairings or short intense solos.

Torches were used in the last work, and the mirrors were held and shifted by the dancers, catching the light. The dancers at one point wore black socks and had the bottom half of their legs over the mirrors as a base and performed some nifty knitting-like movements and other quirky footwork. (Australian audiences might perhaps think of Meryl Tankard’s works.)

Finally, I would like to mention the annoying and distracting constant use of mobile phones and digital cameras throughout the audience during the performance. (For some reason, there were no signs or announcements about no photography as is usual nowadays at venues.) Not only is it rude to the performers, distracting to other audience members and possibly creating a problem with copyright, but it can cause technical glitches and bring the show to a halt!