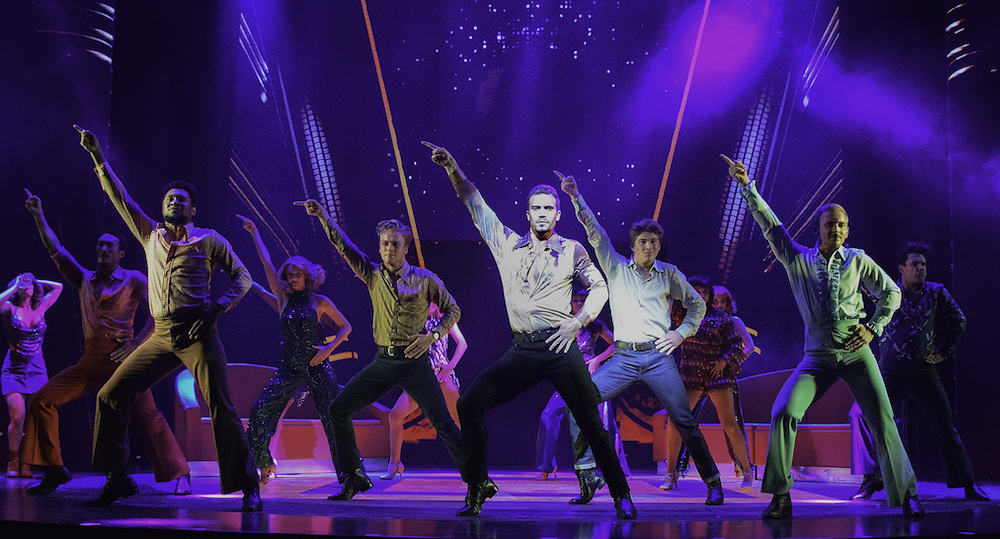 As flashbacks from the last 40 years filled the screens at the Lyric Theatre in Sydney, the audience were transported back in time to 1976, when disco filled the clubs and Saturday Night Fever took hold.

With an exceptional ensemble cast, it’s clear from the first guitar riff that the energetic dance numbers are the drawcard of this production. With choreography by Malik Le Nost and additional choreography by Resident Choreographer Mitchell Woodcock, the flavour of the ‘70s disco era comes alive as the dancers move and groove to the signature Bee Gees anthem, “Stayin’ Alive”. There is no shortage of great music in this production, with hits including “Jive Talkin’”, “More than a Woman”, “Disco Inferno”, “How Deep is Your Love”, and the list goes on, led by Musical Director Dave Skelton. The choreography captures the essence of ‘70s disco dancing, and the dancers bring the funk, tricks and lifts and more to each dance number with exuberant energy.

Set in New York City, Brooklyn and Manhattan, Saturday Night Fever is the story of Tony Manero (Euan Doidge), who works in a paint store and lives with his parents, Florence (Denise Drysdale) and Frank (Mark Mitchell). He lives for the weekend when he can go to the club with his friends to dance. When a dance competition is announced with a cash prize, Tony enters with his dance partner, Annette (Angelique Cassimatis), but soon becomes smitten by the talents of Stephanie (Melanie Hawkins) and wins her over to be his dance partner.

Doidge brings his own take on this role that was originally made famous on screen by John Travolta. While Doidge didn’t have the same coiffed hair as Travolta, and the signature flared pants are replaced with tight jeans, he still brought to the stage his Travolta-style non-stop dancing skills that wowed the audience. Also showcasing her exceptional dance talents is Hawkins. Her jazz/contemporary-style solos were effortless, and when she partnered with Doidge, they delivered highly technical dance routines with brilliance.

In an unusual twist, the two lead characters don’t sing in this production. There are four designated vocalists who carry the songs and provide back-up vocals. Paulini Curuenavuli sang a beautiful heartfelt version of the Bee Gee’s classic, “Immortality”. Bobby Fox had the difficult job of hitting the high Bee Gee’s falsetto notes, while Natalie Conway and Nana Matapule gave solid performances. A vocal highlight came from consummate performer Marcia Hines, who opened the second act with the song, “You”, and performed the role of Estella, the dance competition judge.

The set design in this production relies on large electronic screens that allows for easy transitions between scenes. Brooklyn is depicted with animated dancing buildings, and the life-like photography of the dance studio on the screens gives the perspective of being inside a real studio. The combination of the moving images on screen and a car on a revolving stage also cleverly gives a realistic feeling of Tony and his friends driving through the freeways in Brooklyn. Created by Set Designer Stephanie Roy, the screens are also used to project Manero’s parents, who are pre-recorded and appear larger than life interacting with Doidge on stage.

Saturday Night Fever is filled with the essence of the ‘70s. Even if you weren’t yet born in this era, you won’t have missed out on experiencing all the fun, wonderful disco dancing and hits that are in this latest production. Only for a limited time at the Lyric Theatre, you’ll be dancing the night away!

Saturday Night Fever is at the Lyric Theatre Sydney until 2 June. For tickets, visit ticketmaster.com.au.