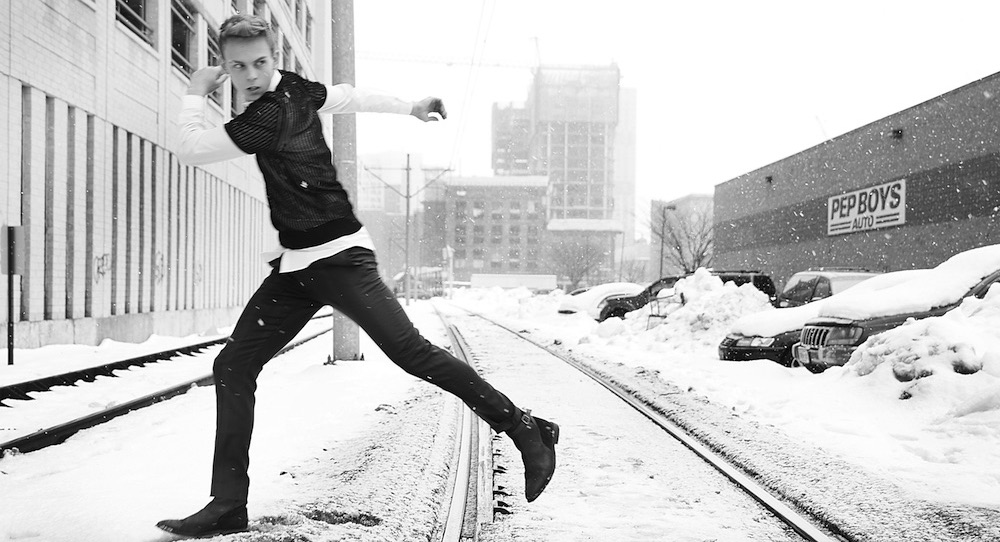 Mitchell Woodcock has done it all: commercial dance, musical theatre, back-up dancing and television work. He can quickly change his hat from West Side Story to hit show Dance Academy. His resume lists work with hot recording artists like Kylie Minogue, will.i.am, Ricky Martin and more.

And he’s also experienced in both sides of the dance studio. Not only has he had a successful performing career so far, but Woodcock has already made quite a name for himself as a choreographer. He was the youngest ever choreographer on So You Think You Can Dance (SYTYCD) Australia, he’s created work for pop stars and for events for PlayStation and the Les Misérables movie premiere. Most recently, while working as a cast member and dance captain of the award-winning show Kinky Boots, Woodcock directed and choreographed indie pop duo Client Liaison’s performance of Splendour in the Grass, featuring Tina Arena.

All of this work, in all facets of the entertainment industry, makes him seem to be unstoppable. Here, Dance Informa speaks with Woodcock on his favourite dance style, what satisfies him as a choreographer and what he’s got planned next.

When and why did you start dancing?

“Like many other guys, I’m sure I started dancing because my older sister did! I began training in Perth from the age of three and moved to Sydney to attend the Brent Street Academy at age 14.”

What would you consider your first ‘big break’? How did it feel to make it as a professional performing artist?

“When I was 17, I was cast in the role of Arab in the Australian touring production of West Side Story. I remember attending the audition when I was 16 and being so overwhelmed by the experience but also recall feeling fearless and hungry for such an amazing opportunity. Hearing that I’d landed my first professional gig sparked so many emotions and left me feeling ecstatic, nervous and also relieved that all the hard work I’d put into my training was paying off.”

You’ve done work in many different dance styles. If you had to pick a favourite style, what would it be, and why?

“My favourite thing to do as a choreographer is to take my training in all genres and combine elements of each of them to create a unique and original style. Merging traditional Broadway jazz with a more commercial style would have to be my favourite.”

You were recently a cast member and Dance Captain of Kinky Boots. What was your favourite part about that experience?

“Kinky Boots is unlike any other show I’ve done. First of all, I was dancing in six-inch heels and wearing fake eyelashes, which was a whole new experience in itself! The opportunity to completely transform myself as an actor every night would have to be the highlight. Also, knowing that I was a part of a show that shared a message of acceptance and equality also meant a great deal to me.”

You’ve also done a bunch of choreographing, including on SYTYCD Australia. What made you want to dive into choreographing your own work?

“Ever since I was a kid, I was always planning routines and creating new steps and tricks. It’s always been a passion of mine and was always encouraged by my teachers both in Perth and at Brent Street in Sydney. Having opportunities to assist Cameron Mitchell, Matt Lee and Sarah Boulter as I was growing up really helped to develop my skills and gave me a great insight into being a choreographer.”

“The adrenalin rush and the limits you can push your body to when you perform astound me. I’ve never quite felt that feeling in anything else I’ve ever done, but choreographing is satisfying in a completely different way. The creative process of devising, developing and delivering to a range of clientele is a very rewarding process. Stepping back and seeing your work has to be one of the most wonderful experiences.”

What’s been your most memorable dance moment so far?

“Oh, this is tough! There have been so many brilliant experiences both in the commercial and musical theatre worlds, but performing in Wicked would have to be a highlight. Having seen the show when I was 12 in San Francisco, before it made its way to Broadway, left me dreaming of one day being in it. Making this a reality in 2013 was a huge personal achievement.”

How has having an agent been helpful in your career?

“Without the support of PJ Clarke and the team at Jeep Management, I would not have achieved half of what I have in my career thus far. Their continuous commitment and expertise help guide me in the right direction. My advice to aspiring performers is to seek representation with someone you trust and whom you feel you can build a strong relationship with.”

What’s next for you?

“For the past 10 months, I’ve been creating work for an amazing Australian band called Client Liaison, who were nominated for three Aria Awards. I’m looking forward to working with them on their A Foreign Affair world tour and several other events into 2018. I’ll also be launching a new company later this year called New Ground Collective, which will specialise in creative production.”

How would you describe yourself in three words, and why?

“Ambitious, detailed and creative are three words that sum me up. I’ve always been driven to push myself and approach everything in life with precision and a creative flair.”