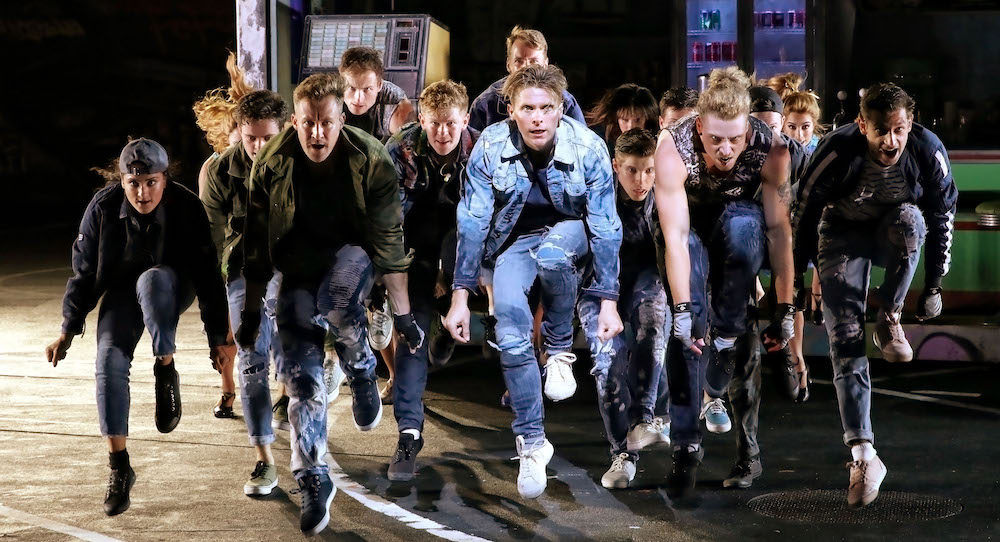 The review for this production is very simple – buy a ticket and go!

In all seriousness, this is one show that musical theatre lovers should not miss! It is a beautiful production with the Sydney Harbour as extra eye candy, sunset going down as you take in your pre-show food and drinks, a collaboration of Bernstein, Sondheim and Robbins all wrapped up in a love story. What is there not to love? 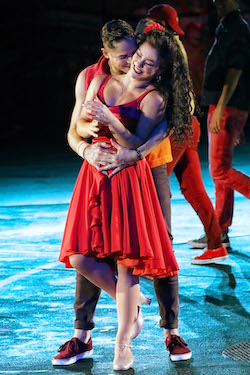 ‘West Side Story’ on Sydney Harbour. Photo by Prudence Upton.

This is the first Handa/Opera Australia musical production on Sydney Harbour; personally, I hope it won’t be the last. Opera lovers may not jump on board the love train on this production because it steers away from classic opera, but the vocal performances alone should persuade them to stay. Principal artists Julie Lea Goodwin and Alexander Lewis played the star crossed lovers Maria and Tony, and both gave stellar performances, particularly Goodwin, who has a beautiful range in those top notes. They were backed up with an equally strong cast from all angles, triple threats all round.

If you love Sydney and love New York City there is so much to be appreciated about the set by Brian Thomson. The original setting being Manhattan really takes the audience to NYC — everything from subway cars, a diner and the Brooklyn Bridge visually slipstreaming into the Sydney Harbour Bridge – more eye candy! All elements of the set were so well manipulated, changing scenes so simply, just ingenious design. One of the subways had ‘Go Home’ on the side of it; it was just one of the poignant things that draws a parallel from the time the story was set in to the world we live in today. The fighting between the Jets (Jewish/Anglo background) and the Sharks (Puerto Rican Immigrants), hate and murdering one another purely over their differences, even the scene when Anita is attacked by the Jets after offering a olive brunch to help Tony. All of the issues and emotions are just a little too real right. The recent bombing in New Zealand on a muslim mosque, Christians being massacred in Nigeria, women being attacked sexually and murdered by men, loving someone who was accepted by your family/community, displaced refugees, Australia’s own immigration problems… West Side Story is just a story, but so many elements of it are someone’s real life story today.

The only element that cannot receive kind words are the weather. It is an open air theatre and subject to the natural elements, whether it is Australia’s scorching hot sun or a ‘Sydney’ storm – the show must go on! And that it did. Opening night was hit with a sudden downpour literally after the most beautiful sunset. It sent audience members running to the retail outlets for last-minute poncho purchases. It went from red carpet ready to drenched in just a few minutes; it was actually the only thing not to love. Unfortunately, the retail outlets were extremely unprepared for the wet weather forcing punters to get highly annoyed and even more wet than they expected. This was very disappointing and hope that this doesn’t happen again! It wasn’t the best experience sitting in the thunderstorm getting drenched even with the poncho but well worth the discomfort. 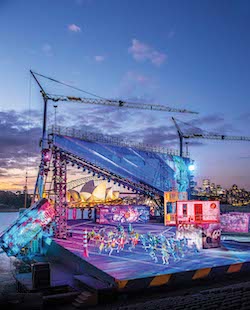 ‘West Side Story’ on Sydney Harbour. Photo by Hamilton Lund.

The rain certainly didn’t stop the cast from giving it their all; it actually added to the whole experience. It was opening night, and they were not going to let anyone or anything rain on their parade. They were well prepared by the costume design by Jennifer Irwin, with her choices carrying well both in the wet and dry weather. The female dancers ditched the chorus shoes and everyone performed in a soft sneaker to deal with wet stage flooring. The rain is a lot for them to deal with, and when I say rain, it was a thunderstorm that only subsided after “America”. Along with the wet weather, the stage is also a raked stage at a decent angle, not just a slight rake. Just a minute to imagine trying to sing not taking in too much water and dance on a wet raked stage without falling over, now just let that sink in! Now take a minute to appreciate the calibre of performer who can take all of that and still deliver a flawless performance dealing with all of those outward distractions. Each cast member took it in their stride. It actually added another layer visually because the water would fly off the dancers’ bodies as they would dance, and it would reflect the light. I can only picture how beautiful the photography of some of those moments will be.

West Side Story may be getting old now, but this production has so many new elements, and the direction by Francesca Zambello and creativity of the cast and crew have done a wonderful job keeping the story alive and relevant to today’s audiences. In 2019, Australia has the unique opportunity of having two productions running simultaneously in Sydney and Melbourne, so there is more than enough West Side Story to go around for musical theatre love for audiences to enjoy. Comparing the two productions will be difficult for die hard fans, but if you are one, don’t waste time and book your tickets, as it closes in Sydney on April 21.