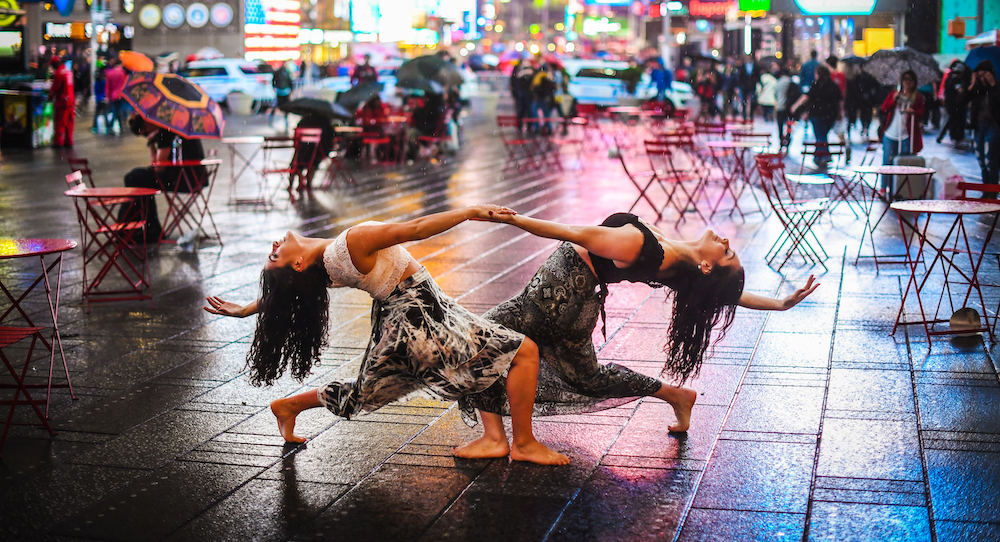 West Side Story, the iconic musical masterpiece, is premiering at the Handa Opera stage on Sydney Harbour this autumn. It’s the first time a musical is being featured on this outdoor stage under the stars, and for sisters Karli and Luca Dinardo, it will be their first time performing together in a professional musical production, and they are beyond excited.

With only two years separating the sisters, Luca followed in her big sister Karli’s footsteps starting dance class at a young age. “I’d be watching Karli, and there would be days that I’d be agitated and wouldn’t sit down, so the teacher said to Mum that I can join in, too, and I loved it just as much as she did, and that’s how it started,” recalls Luca.

The sisters credit a life-changing decision to study at Patrick Studios Australia (PSA) as the turning point when dance became more than a hobby and prepared them for a professional career in the entertainment industry. “We started in Patrick’s junior program, which was casual, and then we did the Elite program,” says Luca.

“The Elite program is an intensive program that gives you a wide range of tools. For us, it was about having that training outside of our high school hours that really allowed us to keep growing and working on our craft,” adds Karli.

Luca went on to complete the Musical Theatre Diploma at PSA, directed by one of Australia’s leading choreographers, Andrew Hallsworth, while Karli’s next chapter saw her confidently moving to New York City to study at the American Musical and Dramatic Art Academy.

On opposite sides of the world, the sisters spent a long seven years apart successfully pursuing their individual careers. Luca in Australia performing in Bring It On and Nine The Musical, as well as assisting leading choreographers, and Karli performing in a range of productions, including Off-Broadway shows, securing the lead role of Alex Owens in the Canadian and USA national tour of Flashdance and most recently performing in the first USA national tour of Hamilton as Dance Captain, swing and understudy for Peggy/Maria.

With limited holidays to visit her close-knit family in Australia, Luca saw West Side Story as the perfect opportunity to entice Karli to audition and come back home for a longer period of time. Karli submitted a self-tape, and Luca flew to Sydney to audition. “I got the call from my agent saying I booked Anybodys and Dance Captain, and I was over the moon,” Luca recalls. “I FaceTimed my sister and for 10 minutes I was ranting on at how happy I was, and I finally stopped talking and she was like, ‘I’ve also got news,’ and I freaked out.”

Karli had secured the lead role of Anita, one that she is very familiar with, having performed this role in three different productions of West Side Story in the USA. “I know my sister so well,” Karli says. “I was screen recording my phone, and I just wanted to have her reaction so I could always watch it, and it is one of the funniest videos I’ve taken. You can see her screaming and laughing and it’s amazing. I didn’t realise how long I was going to be away for and then as time passes and you realise the chances of us doing a professional show together is very slim. The fact that this even happened is definitely my dream come true.”

With such a strong and supportive relationship, the only signs of any sibling rivalry will be when they take to the stage as their characters are connected to opposing teenage gangs in the storyline. “We’ve never really ever been competitive,” says Luca.

Karli adds, “We’ve had each other to lean on, bounce ideas off and to talk to about something that we both understand because we’re in the same industry. If Luca is choreographing something, she is like, ‘Hey, I’m doing this. What do you think?’ And it’s like, ‘Oh, I love that, or maybe do this.'”

West Side Story is a modern-day Romeo and Juliet set on the streets of New York’s west side, where rival gangs, the Jets and the Sharks, get ready to rumble. It’s hailed as the greatest Broadway musical of all time, with iconic musical scores by Leonard Bernstein and lyrics by Stephen Sondheim. Luca excitedly shares, “There is something seriously special about the opening number (the prologue) of West Side Story. It inspires you so much and makes you grateful to be a part of this because it’s a masterpiece.”

In addition to “Cool” and “America”, that are well loved favourites, Karli personally enjoys watching the “Somewhere Ballet” and says, “It’s one of those exposed, honest and vulnerable moments in the show that really leaves everyone sobbing.”

Bringing these big musical scores to life in colourful costumes with a spectacular set, fireworks and Sydney Harbour as the backdrop on an outdoor stage that is larger than the size of a football field is not only a feat but unlike any other performance the sisters have ever done. “To have the chance to conquer the choreography on that stage is really one of the biggest challenges,” says Karli. “It’s very rare to be able to perform outside let alone completely with the elements, so to me it’s a once-in-a-lifetime chance.”

Handa Opera on Sydney Harbour’s West Side Story is on from 22 March until 21 April 2019 on Sydney Harbour, Fleet Steps, Mrs Macquaries Point. For more information and to purchase tickets, visit www.opera.org.au.