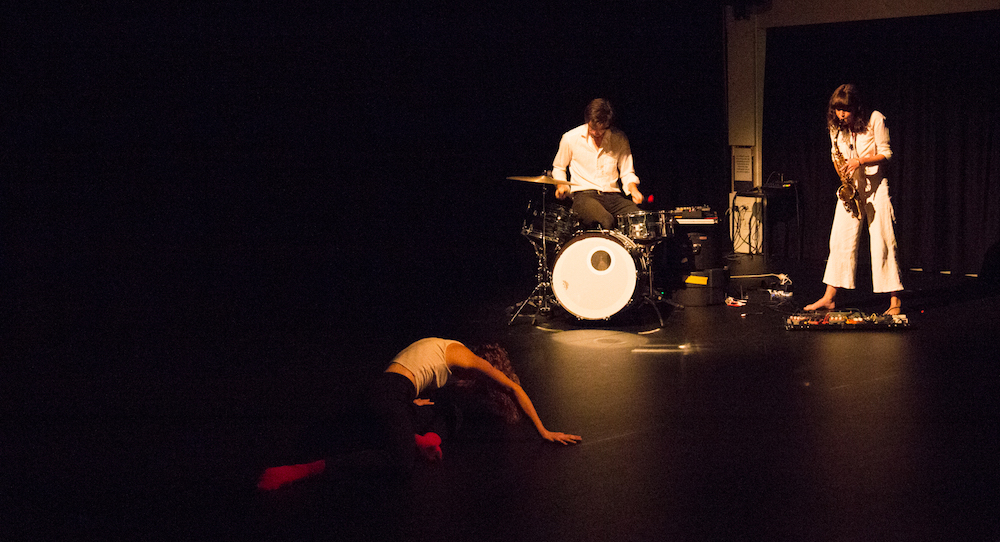 First up was Rhiannon Newton.

Newton began by introducing and attempting to place her work in context. The work was inspired by a desire to understand inertia, in the personal realm, maybe with the goal of understanding new ways of approaching changing and the various cyclical processes of digestion, respiration, reproduction and circulation.

Some of the work was in slo mo, very controlled. Especially at first, there is a sense of weight, of centredness. Everyday hand movements are included.

For some of the solo, it is as if Newton was trapped in an invisible vertical box – she bends backward, tilts and shifts off balance; then with bends, wriggles and shoulder rolls, it is as if she is exploring space in a dreamlike manner.

A deep plié with feet wide apart is used and Newton stares unnervingly at us. You could see her leg muscles quivering with effort.

The previously delicate music changes to a thumping pumping rhythm as Newton performs sort of martial arts stretches, then frenetically swirls and waves side to side. This develops into speeded up frenetic tumultuous shaking Newton becomes a sort of machine. Slowly her arms rise above her head, then are gradually lowered to her side as the music and her performance draw to a close.

Wawn, in a white top and black leggings, began with a somewhat long and repetitive explanation and introduction. (Due to technical problems and timing, what Wawn had hoped to show was only partly possible.) We learnt that the work was about a social contract, payment/exchange as the adjustment of past or future and the production of space. The work is centred on manipulations and transformations of chronological time and everyday life rhythms circulating in contemporary literature on the political economy of finance and the female body. Wawn mentions a “dead labour” scene, how people work for a fixed very low minimum wage (very topical at the moment!).

Her actual solo that we saw was full of gloriously rich, fluid movement with undulating ripples and sinuous wriggles. For one brief segment, Wawn’s body is tightly folded in upon itself, then her hands reach the floor. The section we saw of the work concluded with Wawn standing, arms down.

Barefoot Harrison was dressed in white slacks and a pink top. Her work examines what it is to be regarded as a woman/to see as a woman. The construction of woman as a vessel, as container, as packaged, produce. As repetition, as cycle, as something to be consumed, as something that needs to be purified/homogenised, with expiry/with age. As sale, as stale, as off. As sameness, as whiteness.

In the gloomy lighting, she begins on the floor with her head down, her hair obscuring her face. In slinky, undulating, rippling movements that demand an incredibly flexible back, she crawls forward. It is as if she is searching for something yet held back, because she crawls toward a large fan that acts as a wind machine, and we can feel her striving with the effort. Eventually, she stands up then tilts sideways with arms outstretched. A deep plié is used, then a silent primal scream, which is augmented with Harrison singing ‘Happy Birthday’. Everyday movements (a skip, a nod, a movement as if pushing against something) are included. Eventually, she returns to the floor and poses defiantly staring at us.

The evening finished with Brianna Kell.

Kell was dressed in black leggings, a white top and red socks. Her work explores the blurring of past memories and the future. Also featured are two live musicians – Kirsty Tickle on saxophone and Jonathan Boulet on a large electronic keyboard setup and drums. The work is partly trancelike, partly explosive energy, rigorously, barely controlled. At first, she is still, crouched on the floor as the explosive, volcanic music begins. Eventually, Kell lifts her head, sits up and gradually rises. Twitchy hands are incorporated with almost robotic-like repeated movements. At one point, while on the floor, Kell is slithery and seductive and holds a “mermaid” pose temporarily.

Once standing, the movements are sharp and jagged, sometimes repeated and fragmented. At one point, Kell holds her hands in front of her face as if tormented by memories. There are short runs around the performance space, light jumps and whirling arm movements. As the music grows in volume, tempo and intensity, Tickle moves briefly into the performance area, and Kell moves around her. Kell’s solo increases in its frenetic, relentless, driven, incredible energy. Eventually, this subsides into slinky, feline floor work and a breathless, silent collapse on the floor (a return to reality?).

It will be most exciting to see these works in further development.