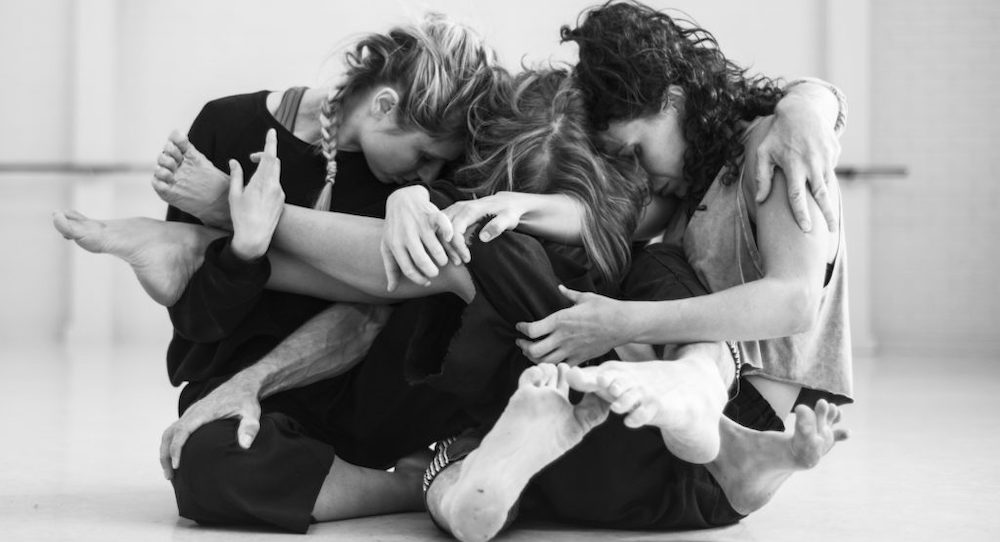 Oh, nothing is for free

In the window, a candle

Well, maybe you can see

Fallen leaves thrown across the sky

Nothing is for free

Right across the sea

But the echo comes back in, dear

And nothing is for free

Following Stephanie Lake’s previous work, Colossus, with its mass of up to 50 dancers on stage, Skeleton Tree is pared down to a microcosm of three performers who writhe, mourn, become a squirming, moving amoeba, one mass of individual body parts.

Lake calls her work “13 meditations on Death and Loss” and asks the audience not to look for narrative or consequence; each piece is its own world. “I encourage you to watch the work through the lense of your own mortality,” she explains.

Across an hour, three exceptional dancers, Marlo Benjamin, Nicola Leahy and James O’Hara, embody a variety of emotions and behaviours associated with death and loss, taking us on a haunting journey into our own inevitable experience of loss and the inevitability of mortality.

Opening with a dramatic burst of light, we see three competitors, dressed in white who come forward to present themselves, bowing to the audience. They are young, beautiful, receiving applause and very much alive. This the first vignette of 13 meditations in resounding contrast to the 12 that follow.

From this point of “aliveness”, the audience is confronted with a range of potential scenarios following death or loss. From incomprehension as the dancers sit huddled together not knowing what to do, to the burst of overly exultant dancing following the hypo electro track “Deathvox” by Paula Templeton – a response of hyper-aliveness when faced with the absurdity and inevitability of death. From helplessness to exaltation.

The composition and sound design by Robin Fox is a mix of heavy metal, jazz, a Bach Sonata, the immortal “Dying Swan” (Camille Saint-Saens) and of course Nick Cave’s “Distant Sky” – a funeral playlist that gives Skeleton Tree an album set-up structure.

The work is engaging and affecting, particularly the sense of grief as Marlo Benjamin and O’Hara prepare a young woman for burial. And the heartbreaking meditation danced to Nick Cave’s “Distant Sky” following what was for me the loss of a partner. James O’Hara’s tragedy is palpable as he holds his beloved, dancing with her in his arms, in a state of disbelief.

Followed by the immortal “Dying Swan”, (Camille Saint-Saens), the layers of music and dance compound the emotional response.

Marlo Benjamin once again shows her ever-increasing dance prowess combined with a mature sensitivity to the theme, while Nicola Leahy and James O’Hara do not shy from exploring the overarching passions.

Skeleton Tree acts like a prism. Each meditation stands alone in its emotional tone, message and style, but like any number of incidents that encompass a person’s life we try to connect them through a narrative of meaning. This is why Skeleton Tree will have an impact on each member in the audience, as they see and feel it through their own individual prism of death and loss.

Simple in form and structure, complex in emotional impact.

The lighting by award-winning Niklas Pajanti follows the mood of each meditation, pinks, a burst of light, silhouetted, sombre when required.

Lake has bravely drilled down to the core of this human inevitability and brought it to the stage in all its complexity, revealing obscure behaviours that potentially arise. It’s startling to see the emotional impact dance can embody.