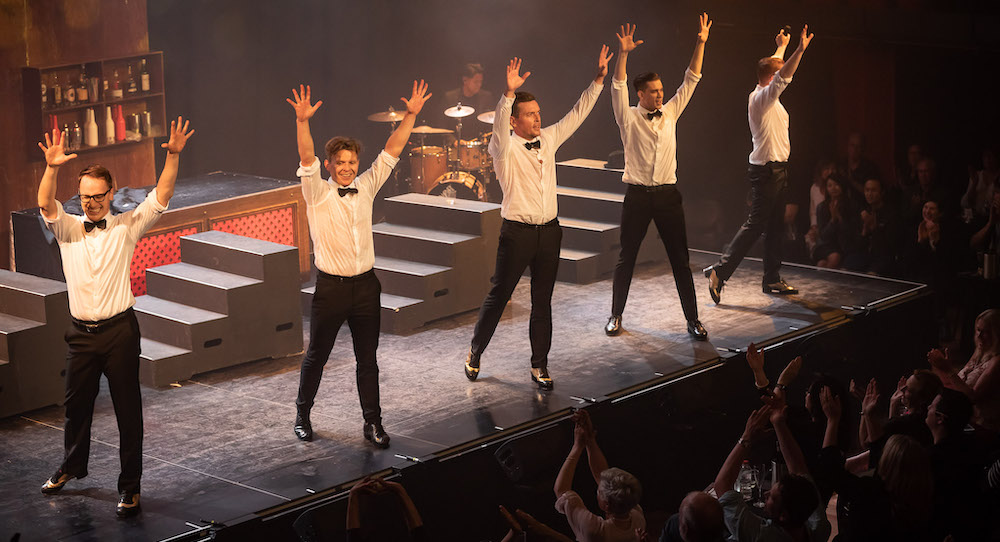 “Tonight is smooth and delicious like a cocktail,” says a member of The Tap Pack to open the show, and they delivered this and much more! The show takes place in a bar where the idea to create The Tap Pack originated, so it’s only fitting that The Tap Pack invites the audience to share that same experience. With tables in cabaret style at the intimate Sydney Opera House Studio theatre, it’s the perfect setting to sit back and relax with a glass of bubbly in hand and enjoy being entertained for the night.

The Tap Pack consists of five talented tap dancers who energetically sing, tap dance and slide their way on stage. The cast features co-creators Thomas J Egan (Singing in the Rain, Fame The Musical, The Great Gatsby) and Jordan Pollard (Avenue Q, Anything Goes, West Side Story) together with Sean Mulligan (Jersey Boys, Legally Blonde, Mamma Mia!), Tom Struik (Boys in the Band, The Voice) and Mark Hill (Muriel’s Wedding, Chorus Line, Anything Goes). Styled in suits, it’s not hard to see that these gentlemen are inspired by the original Rat Pack of the 1950s. Just like the Rat Pack, The Tap Pack uses playful comedy schtik and witty one liners, mostly at the expense of ginger haired Egan, while singing the classics and showcasing tap dancing at its finest.

The show transports you back to a time when singers were known as crooners and music was filled with swing; featured singers Mulligan and Struik command the stage with their vocals and remind us that pop music of today can also be ‘swungified’. Both Mulligan and Struik deliver interesting takes on Oasis’ famous “Wonderwall” and Bruno Mars’ hit “Runaway Baby”.

The rhythm and beats that fill the theatre are not just from the amazing tap dance skills on stage but from a variety of percussive items that add to the complexity of the performance. Pool cue sticks double as canes, striking the floor to create interesting rhythms in between tap beats, cocktail shakers turn into percussion instruments, and empty wine bottles are used as juggling clubs thrown in the air in a highly choreographed sequence. The audience even get in on the act with a fun clapping session responding to Pollard’s drum beats created on a cajón.

Staying true to the artform, Pollard pays tribute to a selection of pioneers of tap dance, including Gene Kelly, Fred Astaire, Sammy Davis Jr and the loveable Mumbles, the famous tap-dancing penguin. Paying homage to another form of tap dance, Hill showcases a traditional sand dance wearing hard-soled shoes and creating interesting sounds brushing and scraping his soles against a sand sprinkled floor.

Later in the show, as we get to know The Tap Pack, the gentlemen take turns in telling their story. Egan was a highlight as he performs a tap solo completely improvised. Delivered with precision, speed and clarity, Egan’s exceptional skills are effortless.

It’s not often that a show is staged featuring tap dance. You won’t want to miss this opportunity to experience such a wonderful artform and the energy and musicality of The Tap Pack. It’s tap dancing live unlike you’ve seen it before.