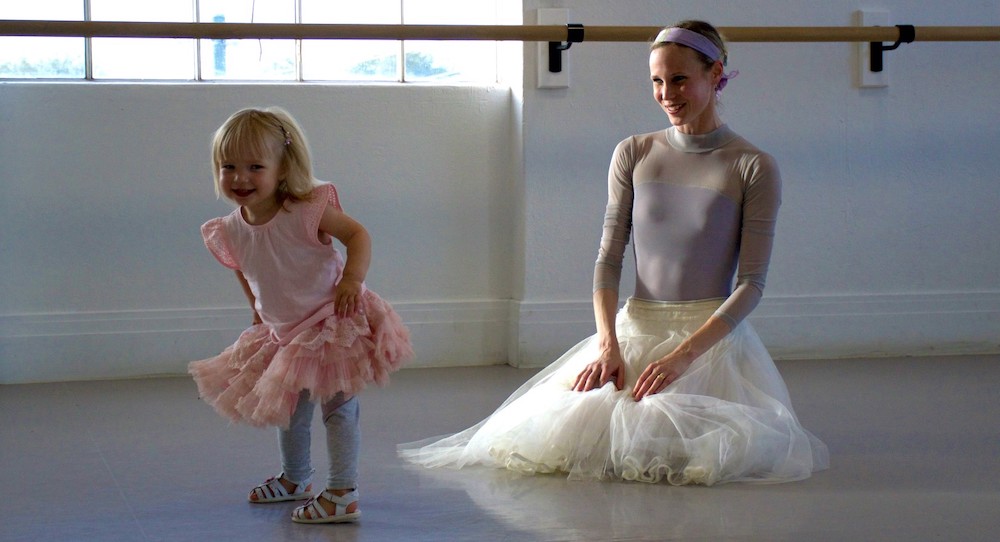 Juggling her career as principal dancer at West Australian (WA) Ballet and being a parent must be working out for Brooke Widdison-Jacobs, because she’s about to have her second child.

She has a three-and-a-half-year-old daughter, Emilia, and is currently eight months pregnant. And she hasn’t let a little thing like growing another human being stop her from dancing. 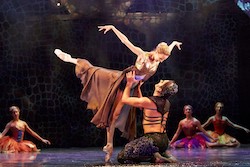 Brooke Widdison-Jacobs and Matthew Lehmann in ‘Beauty and the Beast’. Photo by Sergey Pevnev.

“Before I had Emilia, I was principal dancer with WA Ballet. I kept performing until about four months pregnant, and then afterwards I continued to take classes right the way through pregnancy,” Widdison-Jacobs reveals. “During the pregnancy, I was also working downstairs in administration, on safe duties. After Emilia’s birth, I came back to work. I was on stage about seven months after her birth, and returned to my role as principal dancer, which I’ve done for three-and-a-half years until now. Again, I danced until I was three or four months pregnant, and I’m working with the Education Access team at the moment.”

She continues, “I’m still taking classes, although at eight months pregnant, it’s getting rather difficult. I’ve probably got two or three weeks left of work now. Once I have my baby, I plan to return to work at the four-month mark, getting back into shape. The baby is due in October, and I plan to come back around March next year.”

For someone whose life is all about moving, for both work and pleasure, Widdison-Jacobs admits that switching to a more sedentary role was difficult, but the upside included broadening her horizons.

“It’s completely different to being a dancer. Lack of movement and sitting behind a computer was a bit of a challenge,” she admits. “Working with the education team, developing a program for children with special needs, has been really interesting. I’ve enjoyed working with the children and learning how another part of the company works. It’s opened up a whole new world for me.”

She’s enjoyed it so much that when she returns to work after the birth of her second child, Widdison-Jacobs would like to continue to be involved in the education outreach program.

“How that will be possible, I’m not quite sure with two small children at home and working full-time as a dancer, but I think there’s lots of opportunity, introducing children to a whole new artistic world, especially in those regional areas of was where children don’t always have access to that,” she says. 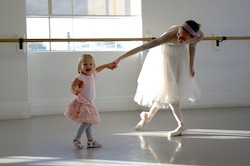 Widdison-Jacobs always knew she would return to full-time dance after Emilia’s birth, but that didn’t make it easy to leave her at home.

“I’d only been promoted to principal two years before, and felt like I still had a lot to give. But it was not without its difficulties,” she admits. “It was hard to leave her at home and be away from her for long periods of time. I’m lucky I have family here and my husband’s work is flexible, so she didn’t have to go to daycare.”

Widdison-Jacobs goes on, “As a mum, it’s important to do something for yourself. For me, I’ve always been career-driven, but I needed more than being a stay-at-home mum. It makes me a better mother. Emilia loves being at the ballet. She’s able to come in and run around the studio in the morning, so she’s very much part of my life as a dancer. She comes into the theatre, gets to look at the costumes, see the orchestra warming up and things like that.”

Easing back into dance

Even though Widdison-Jacobs knew she was going to return to her performing career, it was a slow buildup to get physically ready for it.

“I started by walking my baby with the pram and swimming, together with a good Pilates program for strength and conditioning,” she shares. “I also did my own ballet class at home. Then when I felt good about that went back into the studio with the other dancers, starting at the barre. The first role I did on stage was in Coppélia. I did the “Prayer” solo. It was a leading role, but just one variation without having to do a whole ballet. The first full production I did was Cinderalla in November. Emlilia was born in February. It was a long leadup and a long build. I was quite lucky with my body. I didn’t have too many difficulties. I’m quite hyper-mobile and long and lean, and that sort of all pretty much came back on its own accord. Strengthening was the thing I had to focus on most, which I did through Pilates.”

For a dancer, the bodily changes and reduction in physical control is physically and emotionally challenging, exacerbated by uncertainty about whether things will return to normal after the birth.

“It was the first time my body was doing completely what it wanted to do, which was to grow a baby,” Widdison-Jacobs says. “I struggled more the first time as things were changing and I didn’t have any control over that. The second time around, it’s easier because I’ve been through it and know it comes back. So that has been easier for me to accept this time. Without the support of the company and the directorship, it would make it almost impossible. That’s also why I’ve decided to have a second child. We wanted to have a family, and Emilia is three-and-a-half, so it’s good timing for my personal life, and the company has supported that.” 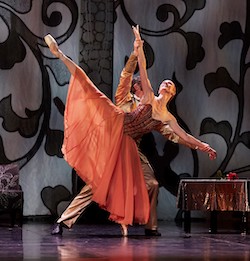 Andrew Radak and Brooke Widdison-Jacobs in ‘Beauty and the Beast’. Photo by Sergey Pevnev.

She adds, “I would like to come back and dance on stage. I realise that two children is different to one, and there will be challenges in the coming months. We’ll cross that bridge when we come to it. No point worrying about it too much. I made the decision because we wanted Emilia to have a brother or sister, and at 36 years of age, I’m not getting any younger.”

While Widdison-Jacbobs knew that she wanted her first child to have a sibling, she didn’t always know she wanted to have a child.

“As a dancer, you are pretty much focused on your career,” she says. “I spent eight years overseas where I met my husband. You make a lot of sacrifices for what you do. But I guess there just came a moment. We were back here in Perth and had family around and started to really feel that need to have a child and experience one of life’s miracles. And from that moment, I started thinking about when it will be a good time.”

She continues, “It was always in my plan to come back and keep dancing. I’d seen some of my friends and other professional dancers do the same thing. It’s not commonplace, but there are enough people doing it. Having children adds a whole other aspect to your life, and it’s something you can bring to your work practice and on stage.”

Widdison-Jacobs is fortunate that the WA Ballet is based mostly in Perth and doesn’t tour much, which makes it easier for dancers with children.

“At The Australian Ballet, they tour a lot more, which makes it more complicated to arrange things for dancers who are parents,” she says. “Emilia has been on tour with me a couple of times, though. My father came with us on a regional tour and brought her along. We went to Indonesia a couple of times and she stayed home, but they were only short – a week or two away.”

Focus and priorisiting are key 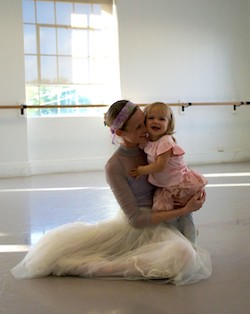 Widdison-Jacobs describes life post-baby as “busy, very busy” and says that it’s helped her learn to priortise things. “I notice the difference between dancers in the company who don’t have children. All they have to worry about is themselves. Having children, you have to prioritise. Maybe a warm-up can’t be so long, or you have to be in the theatre at a certain time so someone else has to take Emilia to kindy. Luckily, my husband is great, so we manage it. A lot is possible, sometimes much more than you think. You become very good at time management. There’s much less time to sit on the couch.”

Although being busy is a challenge, Widdison-Jacobs says the most difficult one was emotional. “It’s hard not always being there. But you have to make use of the time you do have together. There are times when we’re in performance, and we don’t start until midday, so I have the morning with her, and so we make sure we go to the park before the theatre. I make sure the time I do have with her is quality time. I put away my mobile phone and make sure I’m focussed on her.”

When asked what she’d say to other professional dancers who are thinking of having children, Widdison-Jacobs is realistic but encouraging.

“Be absolutely ready for children because they do change your life,” she says. “Probably something that you’re not quite prepared for with your first child. But having one is the most wonderful experience in life, and dancers should be able to experience that. So go for it! There is only a small timeframe for women to be able to have children, so don’t regret not having children because you were too focussed on your work. Your work and dancing is important and has been your whole life, but there is room in your life for something extra. Don’t regret it.”