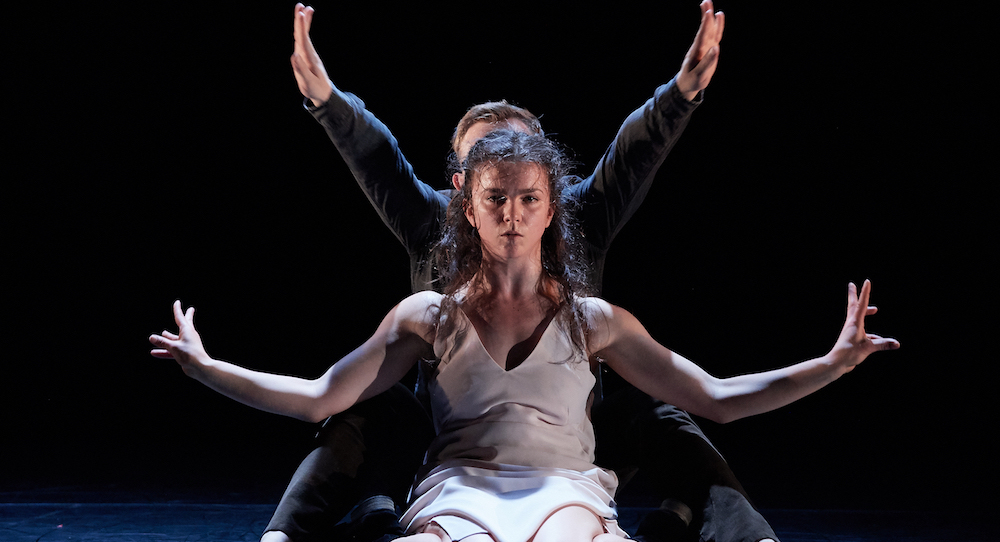 Co3’s WA Dance Makers Project is part of this year’s Move Me Festival 2018 in Perth. This festival celebrates the independent choreographers and dancers from Western Australia in contemporary dance. Some of these celebrated WA artists in the WA Dance Makers Project include WA choreographers Chrissie Parrott, who was most recently honored as a WA State Living Treasure; the dynamic trio, Unkempt Dance (Amy Wiseman, Carly Armstrong and Jessica Lewis); and the talented Richard Cilli. 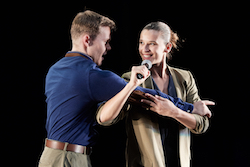 I attended a matinee performance and found myself surrounded by high school dance students. We all found our seats amongst a vibrant atmosphere full of excitement. Stealthy as ninjas, the dancers took their place on stage in the brief moment that the lights were darkened and seemed to appear suddenly when the stage was lit.

This naturally focused my eyes to the centre of the stage, and I saw a man with quite an impressive handle bar moustache. At first I thought, “Is his moustache part of the costume?” But then I realised, his mustache is real. I found that it added intrigue to the piece, especially in the opening scene when the dancers stood on stage and started singing “Pommm Pom Pom Pom Pommm pom pom pom pomp”, among other sound effects. This is where I thought the moustache added to the piece, as it reminded me of a barber shop choir.

As the pattern of the sounds imprinted in my mind (which I still catch myself humming even now), the dancers suddenly pulled out red pom-poms from behind their back. So obvious, yet because it was so obvious, it was unexpected and brilliant! I really enjoyed the sound effects the dancers made with their voices, along with the swishing sound of the pom-poms throughout the piece. The pom-poms became an extension of the dancers. All of this worked well and added different layers and elements, which made it a fun and intriguing piece to watch.

Link Dance Company, which performed this piece choreographed by Richard Cilli, did a great job. This Is Now is a sequel to Cilli’s 2017 work That Was Then, which he choreographed for the graduating WAAPA BA (Dance) course. His recent work, This Is Then, takes a light-hearted look at the present moment, which is continuous, yet never leaves its place in the timeline becoming its own form of eternity. The continuous formations, straight lines and weaving patterns gives you the sense that time never stops; it keeps going, and you have no choice but to move with it. Even when you are still and you want to hold on to the present, you can’t, but you can still enjoy the moment!

Unfortunately, at the matinee performance, Chrissie Parrott’s piece, In-Lore Act II, was not performed. This piece is performed by the Co3 dancers and is a continuation of a project that Parrott began two years ago. This is Parrott’s first commission for the Co3 Australia Company.

The second piece that we saw, like the first, was another unexpected delight. You do Ewe was performed by the wonderful Co3 dancers with choreography by Unkempt Dance. Unkempt does well in engaging audience with everyday life scenarios and emotions that everyone can relate to in a fun and reflective way, almost like a Seinfeld episode. 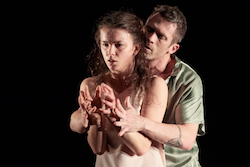 This piece is about letting you be yourself, the authentic you! There can also be more than one version of you. Sometimes, we hide what we truly feel or stop ourselves from doing something in fear of how others may perceive us.

We see the dancers express their emotions along with exposing their different versions of themselves. In one section, we see two dancers weaving, being entangled and lifted up by those around them as they exchange the microphone back and forth, all the while expressing how they feel. One guy talks about how he has dinner parties because he feels lonely; a girl talks about what makes her cry, an example being a fictional character on a TV show when the character is either embarrassed or hurt. Even though these emotions may sound trivial or silly, they are not and people can relate to them.

I particularly enjoyed the climactic ending. A fantastic performance by one of the dancers who became a singing superstar with her back-up dancers all lip-synching and dancing vigorously to Kesha’s song, “We R Who We R”, which is a fantastic song to summarize the work and its intentions.

It is a breath of fresh air to watch a performance that is comical and fun yet has depth and is reflective of daily life and emotions. The show was a well-balanced and fluid combination of dance and physical theatre. You were left feeling like you could dance, sing your heart out and talk about how you felt to the whole world and not care what people thought. The unexpected elements produced a delightful show and overall experience.

By Esther Scott of Dance Informa.