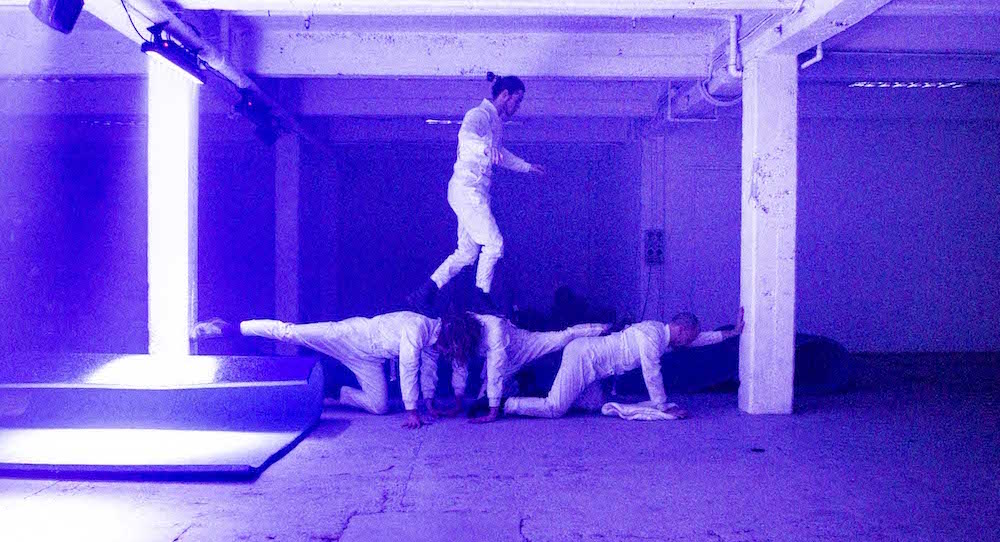 If anything, The Venusian Slip points at a phenomenon in the arts (and quite probably in all human social endeavour) that can only truly be glimpsed from the distance of years. Whilst at one level this is an edgy, subterranean work that neatly encapsulates the optimism and daring of so-called “fringe” festivals, at another it is simply a new-gen attempt at cobbling together a bunch of hand-me-down motifs culled from the lexicon of the North Atlantic avant garde and mashing them up with the aesthetics of sci-fi and the warehouse rave scene. Or, if you prefer it said more simply, everything old is new again. Nothing really changes.

Or does it? Perhaps what choreographer Harrison Hall and his fellow travellers have achieved is, at the very least, a particular synthesis. By placing us in a cold and crumbling industrial space (complete with the weirdly chalky aroma of aging cement), they are, no doubt, hoping to dislodge us from the usual comforts of black box dance. For the first half, we are asked to move around the performance, to seek out individual perspective. In addition, the frequent use of split focus makes us choose what we see. Whilst this trick simply reminds the older audience members of Fringe shows they saw 30 years ago, it is combined here with the chilling futurism of Clockwork Orange and the secretive bunker mentality of illegal doof parties. We feel like the motley survivors of some undefined external apocalypse, and our humanity is compressed and reduced. We cling to the remnants, almost bacterial, and gaze upon a future that is an abstracted echo of a now exploded past.

However, putting all that to one side, from a strictly dance viewpoint, The Venusian Slip offers us nothing special. There is no singular virtuosity here or neat choreographic moves. Indeed, the work is less dance and more akin to what we might call conceptual spectacle; as if it were ideas dancing and not humans. Perhaps to underline this, much of the piece involves the dancers in close contact work, their bodies moulded together in globulous, de-individuated forms.

That said, for all the stark and sometimes Brutalist architecture, there is also humour and dexterity and playful nods to disco and sexuality. It is also very apparent that the four performers are physically committed and our proximity to them reminds us that, dry concepts aside, we are watching sweating bodies. (Even when we question or attempt to obscure our humanity, we remain human.)

In a way, The Venusian Slip is classic Melbourne Fringe fodder: a group of artists tucked away in an old factory complex, reclaiming disused spaces and reinventing the wheel. It brings together aspects of ’60s happenings, late ’80s rave parties, sci-fi dystopias and, for the dance purists, aspects of Tao Dance Theater and Anouk van Dijk’s more site-specific creations. But does it work? Is it fresh and bold? Does it break the rules? Well, that depends on your perspective; or rather, how long you’ve been around.