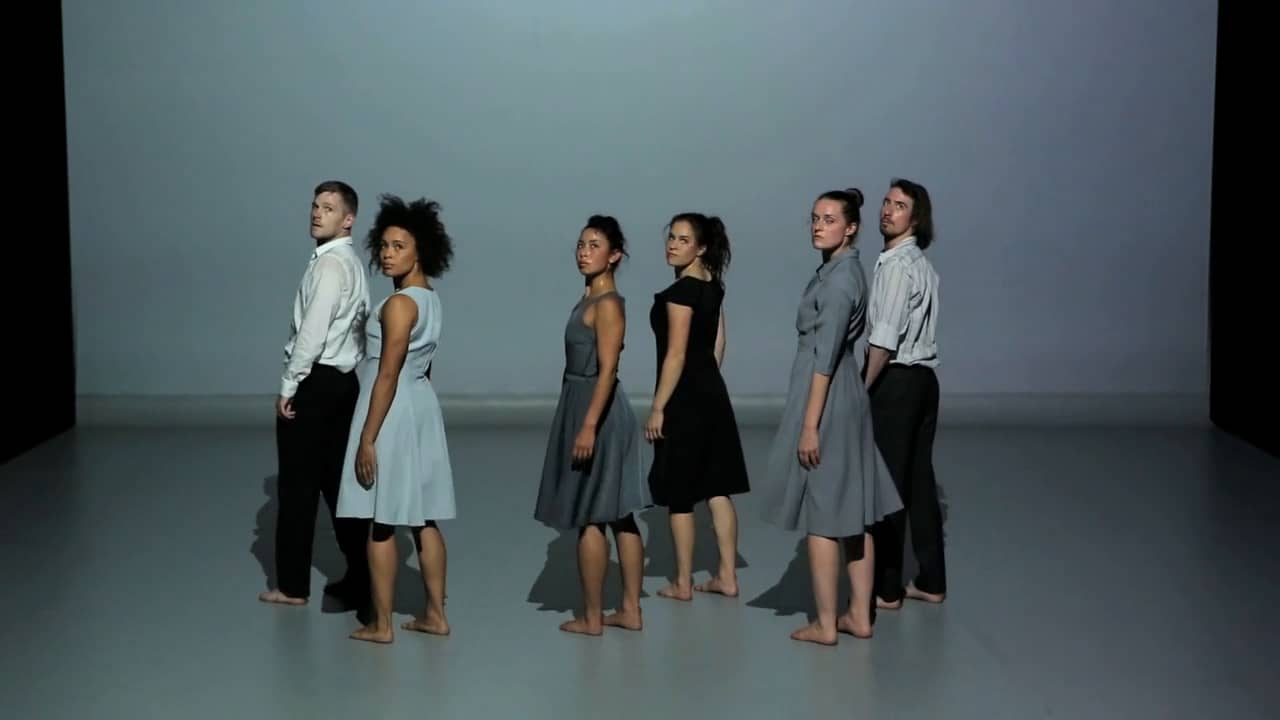 From the classic American film noir of D.O.A. to the contemporary stage, Lucy Guerin’s Motion Picture has been sending critics (like yours truly) into raptures, captivating audiences and winning awards since it debuted at Dance Massive in Melbourne back in March 2015. Much more than a dance version of an old black and white movie (or just another clever way to use video), it is a fascinating, multi-layered exchange between the two- and three-dimensional performance spaces.

Roll the clock forward almost two years and Motion Picture is touring Europe, playing in venues from Paris to Dusseldorf. Indeed, as Dance Informa gets on Skype with ensemble member Richard Cilli, the company is in Brugge, Belgium, where it is five degrees and raining outside.

Fresh from his success as an emerging choreographer in Sydney Dance Company’s New Breed programme late last year, Cilli is back on stage, this time under Guerin’s astute and particular direction. It is doubtless a fascinating transition for the dancer-cum-choreographer.

“Just to be able to put your head into someone else’s process and their artistic values and how they work in the studio you get to learn so much,” he explains. “The little things that she might say before a show — you know, maybe a note about performativity or something — it always comes from such an interesting angle, and it keeps you thinking about the work. It keeps it really alive, and that’s something I’ve really learnt from.”

As a member of Sydney Dance Company, Cilli is well versed in the passionate creative process under the tutelage of Rafael Bonachela, so the switch to working with Lucy Guerin has provided not only the opportunity for contrast and compare but also the chance to jump into a fully evolved and much admired work.

“Lucy visits the themes from so many different angles,” he says. “Sometimes you’re exploring abstract physical concepts, but then at other times there’s psychological or dramatic elements or there’s theatrical things. There’s a lot more skills than just dancing or just acting. You really do have to perform in a lot of ways all at once.”

When Motion Picture first appeared two years ago, Cilli’s part was being danced by Kyle Page (now heading up Dancenorth in Townsville). Indeed, when Cilli was first drafted into the work, he had only seen it on video. “I was a bit overwhelmed,” he recalls. “It was so impressive. The dancers’ accuracy, their ability to copy with very high fidelity what was going on on the screen, or being able to interpret the screen in real time was exceptional. You know, when we first did a full run, I realised just how many levels there are. It’s a very clever work.”

Since then, he admits that his appreciation for the piece has grown. The beauty of Motion Picture is that what begins with mimicking soon morphs into a much more nuanced psycho-emotional investigation. In addition, it confronts the audience with a stark choice between screen and stage. As Cilli contends, “It becomes a conversation between two artforms, between pre-recorded performance and live performance. Also, because the audience do have to choose a lot of the time, the focus is really on them. They’re caught in between the two artforms. I wish I could be an audience member because it must be such an interesting experience for them.”

But of course, when we spoke, Cilli was in the midst of having his own “interesting experience” as a member of a small touring party. Along with Lucy Guerin herself, he’s been sharing time and dinner tables with the likes of Lauren Langlois, Lilian Steiner and Alisdair Macindoe. “It’s so great to be to riff on things and talk about practise,” he enthuses. “Everyone’s got such a different approach to it. It’s such a good group. There’s a really great vibe and, you know, you get to travel through Europe at the same time.”

Once the Motion Picture tour concludes in Orleans in early February, however, Lucy Guerin Inc. will plunge headlong into two more productions back home (Attractor for Asia TOPA and Split for Dance Massive). It’s a phenomenally packed schedule, not simply time-wise but also conceptually across three quite distinct dance beasts.

Cilli laughs, partly in sympathy, partly out of sheer respect. “It all happens very efficiently with Lucy,” he says. “And very quickly. She trusts her dancers a lot. She puts a lot of faith in their ability to bring it to the level that she’s expecting by the time the curtain comes up. She has a great ability to draw these performances out of people, so you know, she’ll pull it off alright.”

For a performer with aspirations to become a dancemaker, Cilli is simply loving the masterclass. “It’s interesting to come into Lucy’s work, into a piece that’s very complex because the way that she approaches work is very different to anything that I’ve done before.”

For more information on Lucy Guerin’s Motion Picture and for tickets for the remainder of the show’s tour, click here.