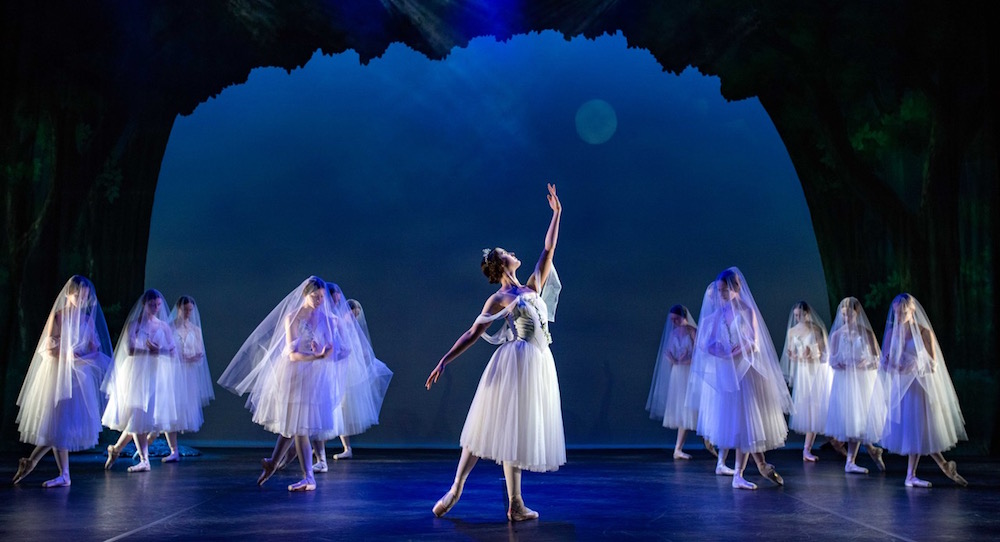 The Sydney City Youth Ballet (Artistic Director Lucinda Dunn OAM) and the SYO Philharmonic (conducted by Brian Buggy OAM) brought us Together Live 2018  – a most exciting programme of both dance and orchestral works.

The SYO Philharmonic was on stage the entire show, crowded at the back of the large theatre of The Concourse, and they were always lit so you could see the various members of the very large ensemble (60 players in total). Brian Buggy OAM was in dynamic, enthusiastic form, and the SYO gave a splendid performance. 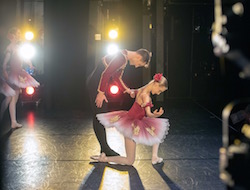 In the first half, there was no real set as such except for in Paquita, there was a single elegant chandelier. After interval for Act 2 of Giselle, there was a minimalist indication of “a forest glade” with painted tree like flats either side and the cross for Giselle’s grave and plenty of theatrical haze. (The Orchestra was visible the entire time for Giselle, which was slightly distracting, although musically the playing was magnificent.)

The programme opened with the SYO in the lush, lyrical and yearning intermezzo from Puccini’s Manon Lescaut that begins with a solo string ensemble, then music from various sections of the work are embroidered on, leading to a passionately tempestuous section and eventually concluding with a poignant descending motif, possibly full of hope.

Paquita, using the Petipa choreography, was excellently staged. It was a testing display piece of pure classical ballet technique. The corps de ballet were terrific and crisp in their performance, and the patterns of the choreography were precisely tightly performed and with fine pointe work. As the chandelier was the only  “set”, it was rather staged like some of the Balanchine works and meant that we concentrated on the dancing. The women were in dusty rose pink traditional short tutus with gold detail, a red flower in their hair and rather distracting matching elbow ruffles that cut the line of the arm. Guest soloist Michael Braun (who has been a principal danseur with both Queensland Ballet and The Royal New Zealand Ballet, among others) was sensational in a short red and gold jacket and black tights. It was a showy piece displaying some fabulous dancing. Toward the end, Braun has a fiery, most spectacular solo that dazzles.

The soloists were tremendous, each having a delightful, sparkling showcase.

The pas de deux for Braun and Lilian Easterbrook was marvellous with some high, difficult lifts. I did feel that the supported pirouettes were perhaps a trifle rushed. Easterbrook’s solo toward the end was crisp and crystalline.

Rossini’s Overture to La Gazza Ladra (The Thieving Magpie) was next – a thrilling performance by the SYO. Opening with a stirring antiphonal snaredrumroll, it was full of bouncy, infectious melodies, at times skittering and teasing, or a military march, yet at other times passionately volcanic. You could hear similarities to the composer’s Barber of Seville. The audience loved it, and there were cheers and screams at the end. 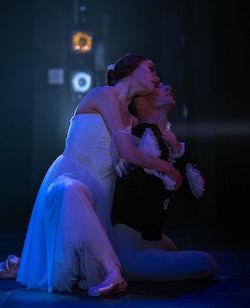 Lucas Jervies’ Powerhouse was exactly that, beginning with a “pow!” of energy and not letting up. The barefoot dancers in their long-sleeved, semi-transparent, wonderfully textured grey costumes (the design on them was possibly like veins?) slithered in their sinuous yet machine-like abstract dance. Arms were angular yet simultaneously fluid. There was a use of rolling floorwork and the deep Graham plié at times. Guest artist Dean Elliott had a mesmerizing, slipping, sliding, darting solo. Toward the end, there was a section for the entire ensemble where the dancers had flickering arms/hands like the transfer of computer data.

The second act of Giselle, using Maina Geilgud’s staging (as familiar to those of us who have seen The Australian Ballet perform it) came after interval in a most impressive performance of the much loved Romantic classic, first staged in 1841.

There was much attention paid to the use of the soft romantic “line” of rounded arms as in lithographs of the period. We saw Act 2, the famous second “white” act with the Willis – so think menacing spookiness, ethereal lightness and love and redemption. 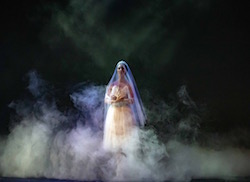 Our Giselle was Grace Carroll – a fragile, delicate, wispy wraith yet with strong steely technique. Love is stronger than death, and Giselle returns to save Albrecht from the Willis. The pas de deux were glorious with floating lifts, and her solos were shimmering moonbeams.

Albrecht was given a tremendous performance by Michael Braun, who portrayed the Count as heartbroken and truly in love with Giselle. His desperate solos when commanded to dance for his life showed his beautiful, pantherine jumps and sensational soft ballon.

Myrthe, menacing Queen of the Willis, was excellently danced by Lucinda Worthing Shore – cold, regal and implacable. Hilarion, who was in love with Giselle before she died and is hounded to his death by the Willis, was impressively danced by Max Herringe. The corps de ballet of Willis was excellent – finely drilled, precise, chilling and intimidating.

Together Live 2018 was a most delightful performance.