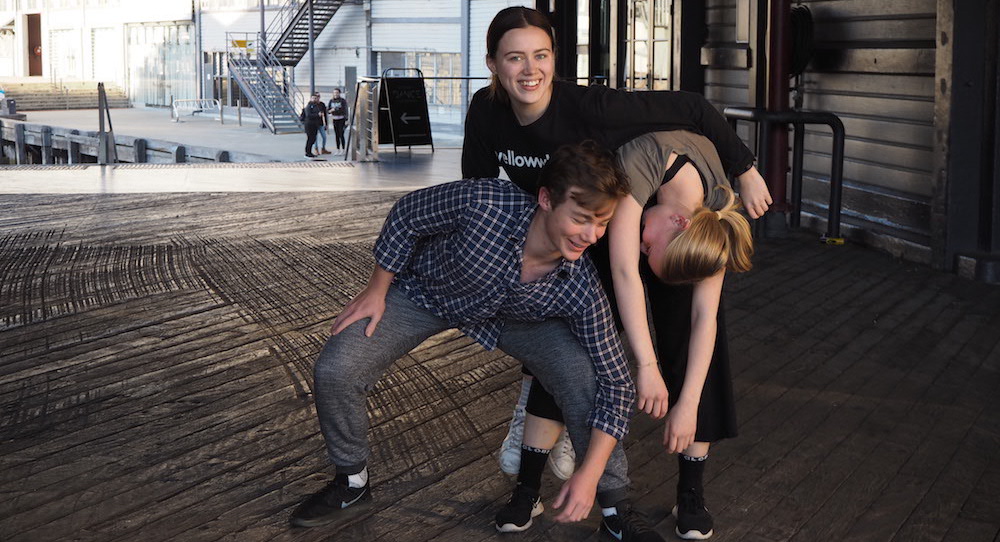 Still beaming and full of enthusiasm, our three Sydney Dance Company (SDC) Pre-Professional Year (PPY) dancers, Austin, Charlotte and Eugenie, are now into their third term of the program and fascinated by everything they’re learning.

SDC is in the process of moving to new premises in Ultimo, with The Wharf Theatre studios seemingly deserted. The dancers haven’t noticed any disruption to their daily program and have already sussed out their new Ultimo space. “I’ll miss this, though,” adds Charlotte, as she looks out at the view of Sydney Harbour, the Bridge.

Highlights of the past couple of months 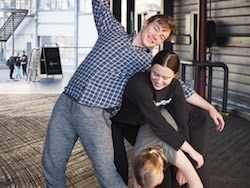 Above and beyond comfort zones, literally…

For Eugenie, the previous week was the highlight as they worked with contact improvisation, with some of the more traditional ideas around partnering being confounded. “We explore a mutual connection with another person,” she says. “There’s a lot of equality in what we’re doing this week – girls lift girls, girls lift guys. It’s really nice; having that experience of getting to lift someone is honestly really good, and it’s so effortless as well.”

As we move further into this idea of lifting and being lifted, it’s fascinating to realise how much these dancers are learning and taking on board. It’s almost like a mini physics class, as Austin says, “Instead of muscle, it’s about stacking the bones. It’s really simple once you’ve got someone up there.”

Eugenie was surprised at how easy it became once you know where to carry your partner’s weight. “There’s a lot of fear in being thrown up in the air,” she says, “but this feels safe, because you’re taught how to be responsible for your own body as well.”

Charlotte adds the importance of awareness, pointing out that they’re taught to keep “a constant connection and touch with your partner, sharing the same knowledge with them and being aware of where their body is.”

Guides through this process included Vangelis Legakis from Flying Low and Passing Through and Sydney independent dancers Alejandro Rolandi and Lee-Anne Litton.

Repertoire and the creative process 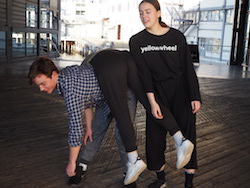 Austin’s highlights included the repertoire workshops led by Kay Armstrong that culminated in a student-driven solo installation evening performance at The Wharf. Including activities such as “writing tasks” to get the dancers into a choreographic mindset and workshopping what they might do, the process also involved peer review prior to the performance. Some solos were interactive, while others were danced in silence. Austin adds, “We even had some horror ones, which were really freaky.”

The students go through the complete choreographic process — sourcing music, costumes and lighting with some surprising results.

Eugenie explains the process, “It was really fascinating because Kay provided a lot of tools that maybe we hadn’t thought of, which made it seem a bit scary because we’d never tried these things before, and you realise you can trust your intuition. Everyone came up with really fascinating ideas. I think everyone shocked themselves, like, ‘I’m capable of doing this!’”

Charlotte struggles to choose one particular highlight. For her, it’s about being in each class, in the moment, learning and adding pages to her internal notebook. “Carrying all these tools that we’re given and trying to synthesise them into authentic movement,” she says of her favorite aspects of the program. “So a highlight for me has been coming to understand myself and how to make decisions based on all the knowledge I’ve collected from each class. For example, the contact improvisation that we’re learning — carrying that through to being more confident with partner work in our repertoire classes.”

One of the most valuable things about the course is the exposure they provided to a variety of artists, each with their own specific focus and knowledge. The three PPYers agree that “you create your own style, using what you learn from all these artists, making it your own.”

The PPY dancers plunged into Term 2 with Ashley Wright, a dancer from the Emanuel Gat Dance company who took them on a two-week voyage into choreographic development in preparation for their Graduation performance.

Other highlights have included learning segments from Scattered Rhymes, a 2014 SDC production. Juliette Barton originally danced this production and has been taking them through the choreography using old video footage. 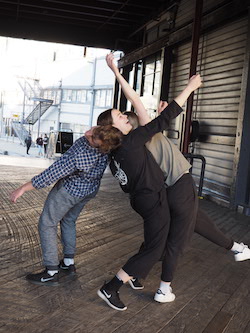 Austin talks about the challenge of living away from his family and friends, which became the inspiration for his solo installation performance. He recalls his thought process, saying, “It was about leaving the pack, feeling like an outsider trying to get into the square. So I called it ‘Lone Wolf’, developed from the idea of moving from Queensland, away from home, while a lot of friends are together at Uni having a good time.”

Eugenie and Charlotte share similar challenges where “it’s interesting to have a constant influx of information every day, but it can be a lot to take on sometimes, not being sure of who you are anymore, but being able to go with the tide and not fight it.”

Austin sums up how they are feeling, already being more than halfway through the year. “It’s scary how quickly it’s flown by, because the rest of the year just goes by in the blink of an eye as well, and then we’ll be done!”

Stay tuned for the next instalment as we follow Charlotte, Eugenie and Austin through the Sydney Dance Company’s Pre-Professional Year program.

If you’re interested in the SDC Pre-Professional Year program, applications are now open for the 2019 Program. Visit www.sydneydancecompany.com/classes-and-courses/ppy for more information.