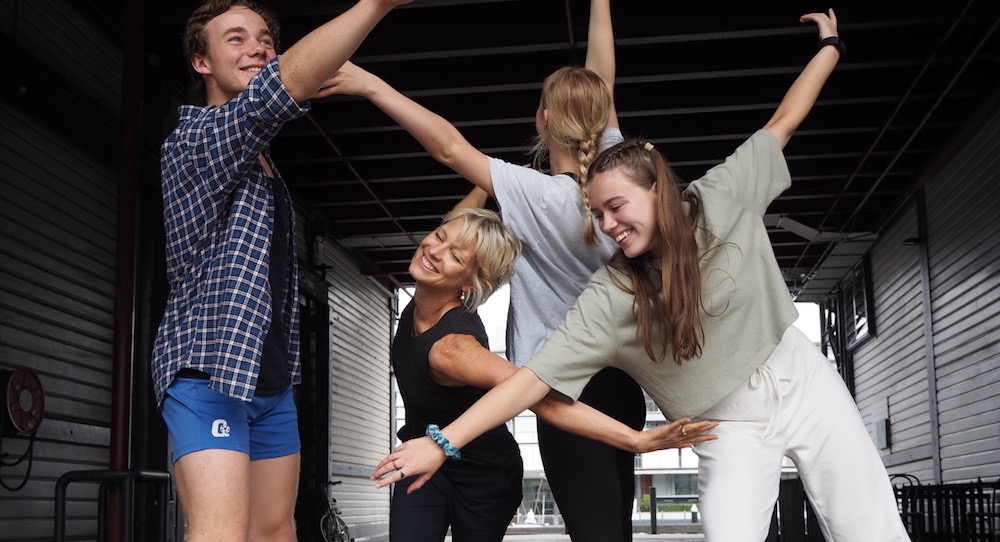 Since 2014, Sydney Dance Company (SDC)’s Pre-Professional Year (PPY) continues SDC’s commitment to training young dancers, continuing the strategy that Rafael Bonachela initiated when first taking the reins of the SDC. Bonachela continually seeks to deepen the experience of the company, heading toward an evolving future rather than relying on past achievements.

After their first seven weeks in the SDC Wharf studios, we had the opportunity to speak to three of the 2018 PPY students – Austin, Charlotte and Eugenie, a wonderfully mixed bag of talent, personality and background. Course Director Linda Gamblin played an integral part in the initial conception and inaugural PPY in 2014, and is still there playing and enjoying her pivotal role in the program. 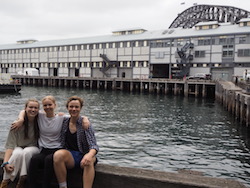 “I remember being at the Royal Ballet School and it being very, very ballet,” Gamblin recalls. “I heard about other interesting things like ‘contact improvisation’, which sounded much more exciting. I think I have developed a course that I would have liked to do!”

She continues, “I enjoy creating experiences for these young people to learn and grow; they have open minds and can teach us a lot. It’s about asking questions and allowing them to work it out for themselves.”

Continuing to work alongside Bonachela, Gamblin ensures the relevance and validity of the program, which leads to a Nationally Accredited Diploma of Dance (Elite Performance)*.

Below, get to know those three PPY students and what the program means to them.

Austin: A Toowoomba boy who started classical ballet thanks to his three dancing sisters

“It’s a given that I would just start dancing,” Austin says. But he was at a crossroads after finishing Year 12, deciding what to do. When he heard about the SDC PPY auditions, he decided to apply, despite never having seen SDC perform. “I was going in a bit blind, I guess, but just the reputation of Sydney Dance Company was enough to bring me down to Sydney to audition, and I’m glad I did!”

Eugenie: Originally from Geelong, Eugenie spent a year with Yellow Wheel, a contemporary youth company, trying to find the path she wanted to follow.

“I’d experienced a lot of perfection where I’d danced previously,” Eugenie shares. “I wanted to be somewhere where I didn’t have to apologise for anything that’s me. I guess my interest is being more…human. I remember being stressed and late for the PPY audition because of a plane strike, but everyone was so relaxed. It felt really, really right. I trust my gut feelings.’’

Charlotte: A Sydney girl who started full time dance after high school at Ev and Bow

“I did mainly contemporary; it wasn’t full on ballet or jazz. But I met Linda at that time, who was in the process of establishing the PPY course. It sounded scary but intriguing, and Marlo Benjamin was encouraging me, saying ;It’s the best thing ever! You have to do it!'”

There’s a lot of work in the schedule, so it is kept relatively flexible. The students are constantly learning different movement styles from a range of industry and professional specialists such as Narelle Benjamin and Martin del Amo, just to name a few.

“They give us their philosophy on movement, on the tendu, on life, and we learn from it,” Charlotte says.

For Austin, this ‘tendu philosophy’ was an epiphany. “Oh my god, I see what you mean; I don’t have to point my feet!” he exclaims. “It’s a whole different mentality — conserving your body. Now that I’m not forcing anything out, like traditional ballet, it feels so much nicer to to do these movements, not always pointing your feet, discovering new pathways.” 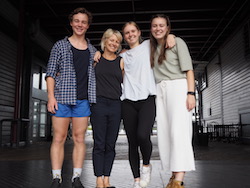 Gamblin explains, “I wanted to create a course where you get an experience and think, ‘Why have they embodied that movement language that way?’ Mainly, I’m not telling them not to do it this way or that way. It’s more, ‘Why have you have done it that way?’ You can see when something is not authentic.”

What are they all looking forward to?

“Seeing the development across the year,” Austin explains. “I’m excited to see where we’ll all end up. It’s the journey I’m excited about!”

“Making a lot of epiphanies over the year,”Eugenie adds. “Coming up with my own philosophy, even it’s just the smallest fraction of one.”

“The progress mentally over the year and having so many artists coming through,” Charlotte says. “Even if I just learn one thing from one person each time, my basket is going to be huge of things I can pull out.”

And for these three young dancers, what is contemporary dance?

“Movement that explores the current political, social themes that we live in, because it’s the most primal part of ourselves which is moving,” Eugenie comments. “People can find it confusing and confronting because it’s just human.”

“It’s raw, authentic movement,” Austin adds. “There are so many different ways to express emotion through exploring different styles of movement with the body.”

“I feel like before the course I would have said, ‘Oh, you just kind of move around with your shoes off,'” Charlotte says. “But I didn’t know how broad it could be! Already after seven weeks and all these different people coming through, understanding how movement can be the basis for communication, or expression, or moving for the sake of feeling something in your body. There’s all these reasons, or maybe no reason.”

Stay tuned for further updates on the dancers as we follow their journey through to graduation.

And now…back to the philosophy of the tendu…