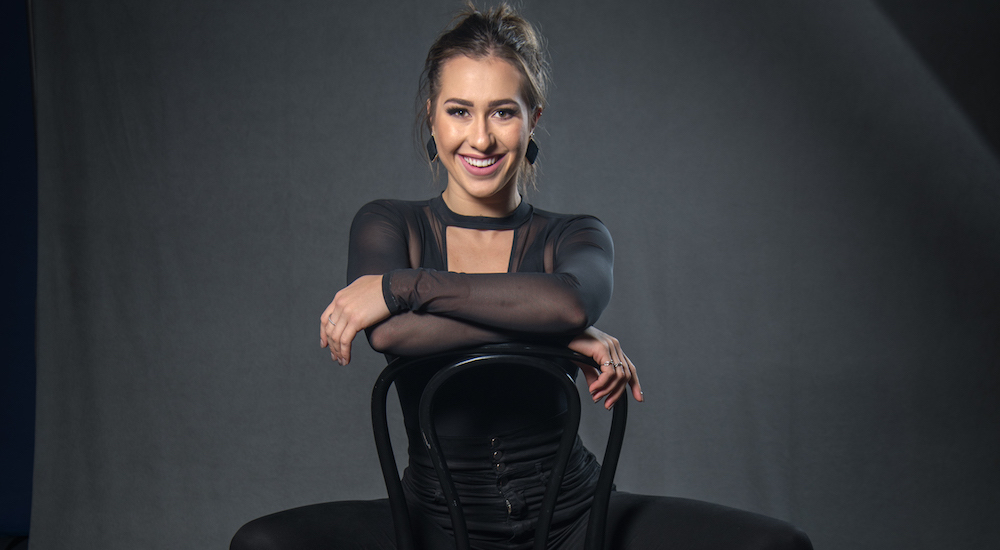 Romy Vuksan is about to set sail for a second time with Norwegian Cruise Line. She is the triple threat: at her best, she says, when dancing, singing and acting at once. Vuksan says her life changed when she got the call to join the upcoming new production of Havana. “I am in a principal role, I get to dance, I get to sing, I get to act. It is a bit surreal,” she shares.

Originally from Brisbane, Vuksan received a scholarship in 2012 to attend Jason Coleman’s Ministry of Dance. She trained there for two years and was part of the school’s agency during that time. “I first took class at the age of two,” she recalls, “and then from the age of eight, I was training in every style at Ritz Dance Academy in Brisbane. My teacher, Miss Rhonda, made sure I was training in everything.”

Havana is Vuksan’s second contract with Norwegian. “I was dance captain last year on the Norwegian Pearl,” she explains. “When the audition came up, it was just the right timing. I decided I wanted to see a bit of the world and experience a bit more. I had an incredible experience on the Pearl. It is a totally different world and a totally different lifestyle. I perform every day, travel the world, doing what I love. Surrounded by incredible people from around the world. Being dance captain, and continuing to learn the other side of things.”

Of the audition process her second time around, Vuksan says, “It was Tuesday morning, and I remember it so clearly. I woke up to this email from Kai Carrier, the casting director for Norwegian, asking me to video audition for Havana. I learnt the choreography off a video. The next day I had a response from Kai.”

Vuksan is creating the role of Fabiola for the new show Havana, created specifically for Norwegian Cruise Line’s newest ship, the Bliss, which starts sailing this June. The character Fabiola is a Cuban performer in pre-Castro Havana. “I am half Yugoslavian, so I have dark features,” says Vuksan. “I am just throwing all my training at it. Within a week (after being cast), I was here, so I didn’t have any time to prepare. I had to immerse myself when I got myself here with the music and the character.”

Vice-President for Entertainment with Norwegian Creative Studios, Richard Ambrose, explains that Havana is “a celebration of the Cuban culture, Cuban music. It’s the creative idea of Warren Carlyle, who’s the Tony Award winner for After Midnight. So, we developed and created an original musical specifically for Norwegian Cruise Line. The designers are Ruben Toledo and Isabel Toledo doing sets and costumes.  Albita Rodriguez is writing the music; she’s a Grammy Award-winning Cuban musician, along with Ryan Oliver Scott.”

“The most exciting thing about the production so far,” says Vuksan, “is for me being part of the development of a new show with original choreography and music, and costume design, rehearsing with a nine-piece band. It is a brand new ship, and a brand new show.”

Ambrose says of the production, “We’re really excited, and we have outside interest, land-based producers who are interested in the show. It could be the first show to come from a ship to go to land!”

Warren Carlyle thoroughly enjoyed creating Havana for Norwegian, saying “working with Norwegian Cruise Line is amazing. We have every single prop in the first day. We have the same tools as if we were doing it on Broadway.”

And Ambrose can’t speak highly enough of Carlyle, saying “He’s fantastic. He’s the most collaborative, open, creative artist. He does it on the spot, and it’s always brilliant! The dancers and actors will do anything for him. They just trust him implicitly. It’s literally the most positive room I’ve ever been in for a rehearsal process. But he’s tough. He makes you want to do great work.”

Robert Dean Hertenstein, Senior Director Entertainment Production adds, “He creates a room that’s so positive and encouraging. One thing I love that he says to everyone is, “just say yes to everything, and then we’ll figure out what it is, but just say yes!”

Norwegian Cruise Line performers need to be versatile and trained in a number of skills. Vuksan’s advice for aspiring performers is to “immerse yourself in everything. You have to be going and seeing shows. It is vital to be a versatile dancer and performer. Especially, as well, being a dancer who can act. You can’t have a Plan B; otherwise, Plan A won’t come into fruition. And find the people who inspire you.”

Vuksan is going to be inspiring audiences all over the world in Havana on board the gorgeous new Norwegian Bliss from June 2018.

Norwegian Creative Studios will be coming to Australia soon to hold auditions for dancers and singers. Dance Informa will be announcing the cities and dates very soon…..