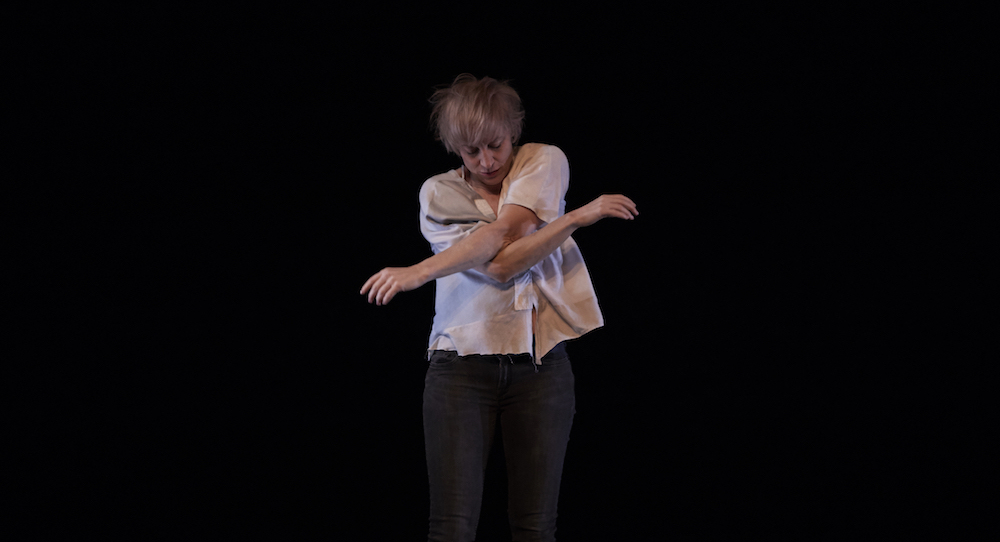 On stage, there is a drum kit.

It is a warm early autumn night, and the auditorium is tightly packed for the appearance of the American-born, European-based dancemaker. She’s been here in Australia for more than a week already, holding workshops and helping to judge the Keir Choreographic Award, and now at last, the Melbourne audience are about to witness her in solo performance action. 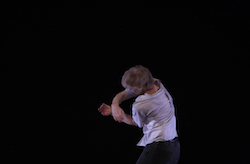 Then, with a minimum of fanfare, she walks quietly from the wings to stand downstage centre. She looks small. Fragile. Human. Looking at her, I am reminded of something she said two days earlier. “Where is the performer in relation to what they’re doing?”

Rewind a little, and we are sitting at a long table in a retro-themed café; and dancer/choreographer Meg Stuart is trying to strike a balance between being open about her process and maintaining its essential mystery. After all, dance is a language not made of words, its lexicon both abstract and immediate, physical and vaporous.

“There’s a whole world to tap into that’s beyond the rational, and this is what dance opens up,” she observes, choosing her words with care, before moving onto the common notion that dance is an inexact language. “I don’t know if terms like ‘exact’ or ‘inexact’ aren’t still value judgements; but I do think that movement research is important and then how you articulate and let the viewer into that language,” she adds. “Of course, they don’t know how to read, so you need to give them windows, whether it’s through repetition or structure, or form and organisation, or through other moments of recognition, which could be through the nervous system or a struggle or a contradiction.”

Born in New Orleans in 1965, Stuart is the daughter of theatre directors and as such was immersed in the worlds of the creative and performative from a very young age. “So I grew up in this land of fiction, with all this drama,” she recalls. However, it was dance rather than straight theatre that compelled her. “I was running track, so I was very physical. Also, I think I wanted not to be a ‘role’ but to be myself; but then I realised as I was dancing that the notion of self is really complex, really multiple. So, I suppose I rebelled from my parents, but not that much.”

As a teenager, she discovered contact improvisation, and a fuse was lit. “That was wild because I got to touch strangers, and I was, like, ‘Whoa, what does that mean?’ And then I guess I just met the right kind of dancers, and then there was this whole kind of world or sphere I could tap into.” 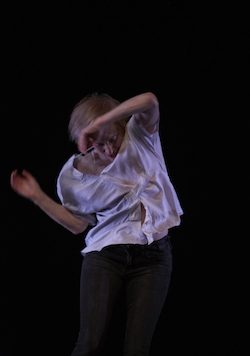 Back on stage at Space 28, however, Stuart dances solo, beginning with a series of controlled yet frenetic gestures to a soundtrack of propulsive live drumming. Signs of Affection weaves together repetition, sculptural forms and, ultimately, a kind of quiet withdrawal.

Yet, for all the fine details and choreographic niceties, we are also made aware of the inevitable and ceremonial essentialisation of the performer. In a moment eerily reminiscent of Pier Paolo Pasolini’s controversial film Salo, Stuart crouches, arse revealed, offered up like a sacrificial object for the pleasure of our appraisal and consumption. In this act of confronting dehumanisation, we are, of course, reminded of our shared and remarkably tenuous humanity, of that blurred frontier between our fragile animal core and our even more brittle civilised act.

Here again, Stuart’s words come to mind. In response to a question about the differences between solo and ensemble performance, she had said, “With solo, it’s more like, ‘Who am I to you, what are we here for, what do you expect of me, what is our contract?’ And so as a dancer, you just allow yourself to be vulnerable and just be there. It’s more like a big question mark; whereas inside the group, although there are still questions, they’re more embedded and negotiated between the collective.”

After relocating to Europe in 1994, Stuart formed the company Damaged Goods and since then has created more than 30 solo and group works. Based between Brussels and Berlin, she has continued to explore her longtime passion for improvisation and, amongst other things, curated festivals, collaborated with renowned artists like Philipp Gehmacher and (significantly for us here in Australia) been invited to participate as jury member and workshop presenter for this year’s just completed Keir Choreographic season.

“I really enjoyed it in one way because it’s great to talk with others about work, but it was also a bit not obvious, not easy,” she admits. “All the work was really different, so I impressed by the range; and any support for contemporary dance is good by me, on all levels, but maybe this idea of the competition needs to be looked at more closely; like, to support the making of work but take the competitive edge off in a way.”

Indeed, like many creators, Stuart has a sometimes vexed and conflicted relationship with spectating and “judging” the work of others. As she says, she is largely concerned with how primarily inner monologues can be translated externally into movement, let alone choreographies that others can be said to “understand”.

“I mean, it’s all in there, that journey from desire to wish and then action,” she explains, “but it’s like you don’t always listen to the words but the way they’re said, or you don’t focus on the moves but what they’re not doing.”

Perhaps because she knows what my role is (and by extension what Dance Informa’s part in the exchange is), she signals that one of the works she will present at Space 28 was created as a response to something a New Yorker critic once said.

Back in the café, Stuart is pondering the nature of live performance. “Do I write a kind of fiction around my body, create another body on top of my body and then erase that and try to live in my fiction?” 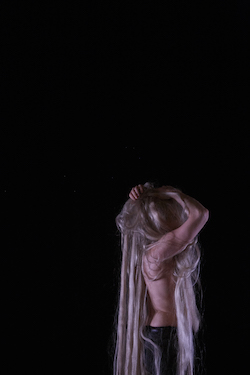 However, beyond the private processes of dance creation, there is the public ceremony implicit in putting on of a show. “I’m curious about the sources of ritual and people gathering and how language is formed,” she muses. “This kind of psychic hygiene, this sort of cleansing and shedding, of getting out of your own skin, but also, this process of honouring something beyond the ego, of entering a space that is trans-personal.”

Perhaps here is the nub of it, the core magic of transmitting the internal to the external, that it somehow performs that deeper and more enigmatic trick of helping us to become one another. For I/You to equal Us, even if only for a moment.