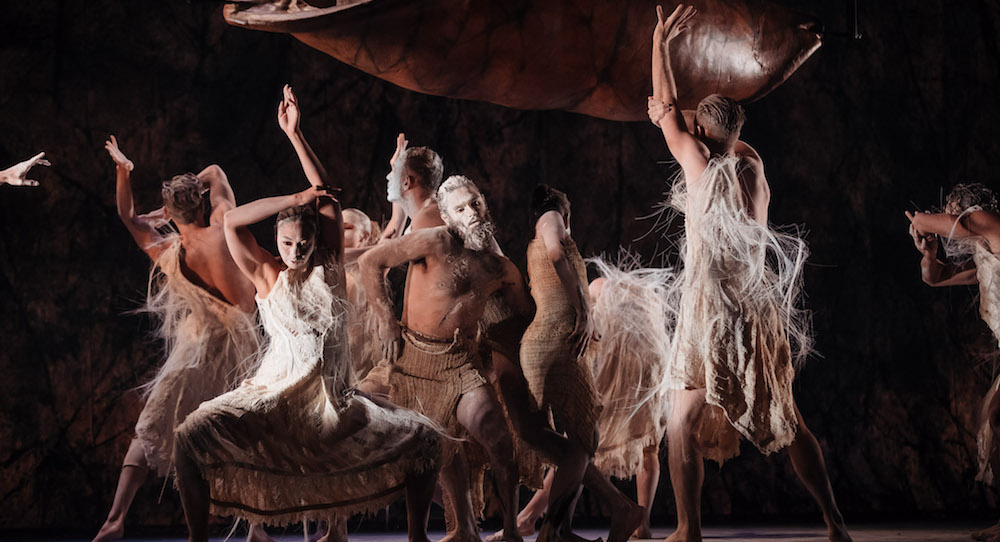 Bangarra Dance Theatre’s latest work, Dark Emu, is visually stunning and superbly choreographed and danced. More abstract than last year’s Bennelong, under the inspired direction of Artistic Director Stephen Page and choreographed by Page, Daniel Riley and Yolande Brown, Bangarra bring to life the somewhat controversial book by Bruce Pascoe that challenges our perceptions of Aboriginal history – that the First Peoples at the time of white settlement in 1788 were in fact utilising sophisticated and sustainable agricultural practices completely unknown to most Australians. Aboriginal use of agriculture and aquaculture is included. The show begins and ends with the story of a spiritual creator, and examines into how colonisation affected the First Peoples’ culture and the landscape. In a series of vignettes of interwoven segments, Dark Emu moves across time and country to highlight the relationship between Indigenous people and the land. It also references Indigenous people’s interactions with early convict settlers, and the Stolen Generation. Sometimes, it is a bit hard to tell whether the dancers are meant to be spirits of the land or ghostly ancestors.

From the opening segment, the work is visually arresting. Jacob Nash’s first set is perhaps like a whirlpool inhabited by the dancers. Then we follow a cycle of grain and its growth and cultivation. Another very dramatic section is that of fire and ash with firesticks and banksia. Water is also a major element, as there is a segment in which the male ensemble carry on and off huge oversized pebbles – adjusting the river flow so that fish can be caught and water and information can transform life perhaps?

The dancing is incredibly polished and accomplished. The three choreographers — Page, Riley and Brown — together have created a very demanding physical language that’s fluid and eclectic, in the sizzling trademark Bangarra style that melds contemporary dance and traditional dance steps, and this production both challenges and makes full use of the entire Bangarra ensemble. There is some unusual male partnering and perhaps allusions at one point to Matthew Bourne’s Swan Lake.

Nash’s wonderful sets and Jennifer Irwin’s numerous assorted costumes, some relatively simple, some complex and many layered with a glorious use of texture, enhance the atmosphere of the natural environment on stage to delineate each segment with clarity, sumptuously lit by Sian James-Holland. Irwin’s costumes are sensational and include delicate, dry wispy and floating “Kangaroo Grass” outfits and the assorted colours of the skirts worn by dancers in the “Forged by Fire” section.

Steve Francis’ complex, pulsating, throbbing and multilayered score combines electronic and acoustic elements with assorted instruments, some presented in an unusual way, as well as the sounds of gunshots, moths, cattle, rain, wind and other natural elements.

Dark Emu is a fabulous, challenging and somewhat provocative work that showcases the entire Bangarra ensemble.