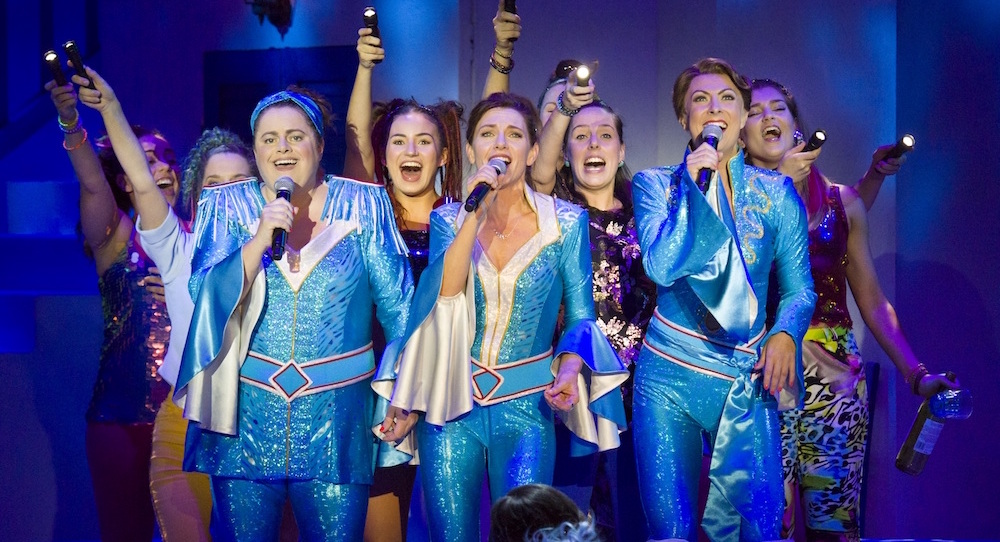 MAMMA MIA! The Musical has the audience dancing in the aisles to a string of ABBA’s hit songs at Sydney’s Capitol Theatre. Musical enthusiasts, ABBA fans and those who loved MAMMIA MIA! the movie will enjoy this feel-good, heart-warming story about love, secrets, friendship, family and life. Set to catchy ABBA pop hits, this jukebox musical makes for an entertaining night at the theatre.

MAMMA MIA! is the story of a bride-to-be, Sophie Sheridan (Sarah Morrison), who is searching for her father so he can walk her down the aisle. After reading her mother Donna Sheridan’s diary (Natalie O’Donnell), she discovers there are three men who could possibly be her father, including architect Sam Carmichael (Ian Stenlake), English banker Harry Bright (Phillip Lowe) and adventurous travel writer Bill Austin (Josef Ber), so Sophie secretly invites all three to Greece for her wedding, hoping to find who her real father is.

O’Donnell, who played Sophie Sheridan in the 2001 production, is returning to MAMMA MIA! in the role of Sophie Sheridan’s mother, Donna Sheridan. O’Donnell delivers many of ABBA’s hits, including “Money, Money, Money”, “Super Trouper”, “SOS” and an emotion-filled rendition of “The Winner Takes it All”. Donna’s best friends, Rosie (Alicia Gardiner) and Tanya (Jayde Westaby), together sing the classic ABBA hit “Dancing Queen” as they reminisce about the old days when they performed together as “Donna and the Dynamos”. Westaby is superb as Donna’s stylish, cougar, divorcee friend and Gardiner’s joyful care-free performance, and comedic timing with Josef Ber in “Take a Chance On Me” had the audience laughing out loud. Sophie Sheridan (Sarah Morrison) and Sky (Stephen Mahy) as the young couple in love give a heart-warming performance.

The fabulous eight-piece band led by Musical Director Michael Azzopardi started the night with a wonderful overture of ABBA’s hit songs that gave the audience a taste of what was to come. With a talented ensemble cast, Tom Hodgson’s sharp edgy choreography came alive, especially in “Voulez-Vous” and “Money, Money, Money”. Sam Hooper in the role of the groom’s best friend Pepper is a stand out in “Does Your Mother Know” as he tries to charm Tanya using his athleticism with choreographed jumps and flips. Award-winning Director Gary Young brought something new to this production, giving it an Australian flavour. Donna hails from Australia, along with Bill Austin and Sophie Sheridan, all performing with their Aussie accents intact with a few moments of Aussie humour.

In all its simplicity, this show has universal appeal and ended with one big party of ABBA hits, including “Waterloo”, which had the audience quickly on their feet, singing and dancing along. If you are looking for a fun, uplifting night out at the theatre, MAMMA MIA! will deliver.