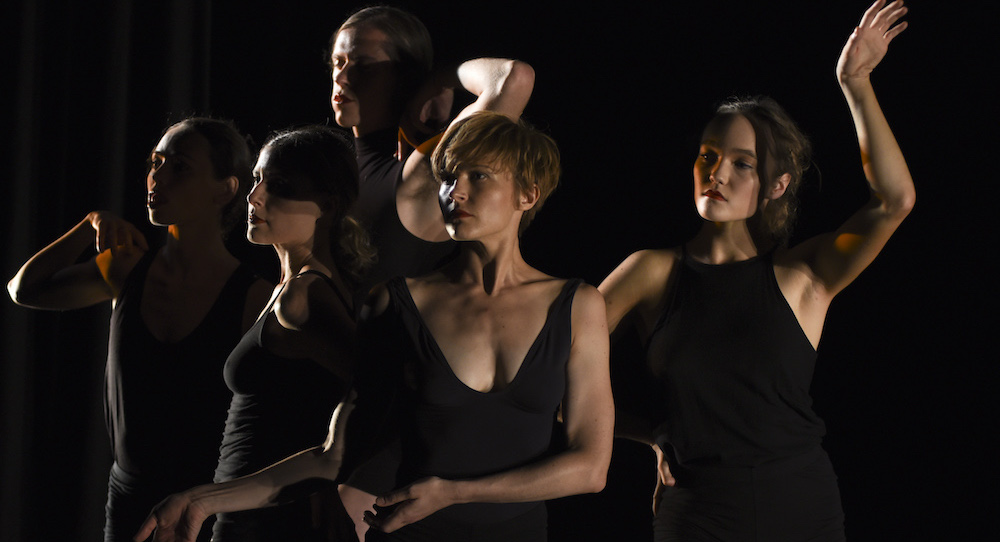 WILDEBEEST/The Venus Flytrap was the first half of the programme. It is  a world premiere, examining “the artifice of social and gender behaviour through a distillation of human interactions”. As we entered, the dancers were already on stage, stripping off their streetwear and passing around lipstick and more. Eventually, it was revealed that the cast were all wearing black tops and shorts, each slightly different. The opening section was in silence, but Kieran Warner-Hunt’s soundscape, when it began throbbed, pulsated, beeped and hummed. Backley-Astrachan’s choreography sometimes was fluid and rippling; at other times, fast and challenging. It included walks on high demi-pointe and stretched arms as if for an Art Nouveau sculpture. There was an intense, quite sensual female pas de deux. There were writhing group sculptural sections, lots of slithery floorwork, some staccato Flamenco-like palmas (and also a children’s clapping game, as well as use of the lullaby “Rock A Bye Baby” and rocking an invisible child. Are the dancers meant to be children, or is it childhood memories?) Allusions were briefly made to the rippling arms used in traditional classical Swan Lakes. Spectacular mini solos were interspersed with intense intimate duets. Frankie Clarke’s lighting was gloomily atmospheric. The work ended with a return to the way it had begun with a recapitulation of the intense opening duet.

Valley, the second work, is a development of a solo performance created in 2016, and this is the Australian premiere of this extended version. It is not really made clear, but Valley is apparently set on a frozen and desolate Arctic island, where a small society of four co-exist. It has a sort of dream-like atmosphere, and there is a sense of The Group vs The Individual and definitions of boundaries (Environmental in this case? Or emotional?). Snaking lines cross the stage, dividing the space, then slide off. Percussive beats are important. Choreographically, Backley-Astrachan’s work includes slithery floorwork, spiky arms and hands at various points and the use of martial arts, as well as Graham technique and perhaps an allusion to Balanchine’s Apollo. There are some most unusual lifts and partnering. Valley equires a laser sharp stretched “line”, and at one point, some incredible closed in pirouettes with crossed arms performed at dizzying almost warp speed. Allie Graham, in a short red dress, has an hypnotic, astonishing solo. Again, the work concluded with a semi recapitulation of the opening sequence with a repeat of the snaking lines across the stage.

This is a most intriguing double bill.