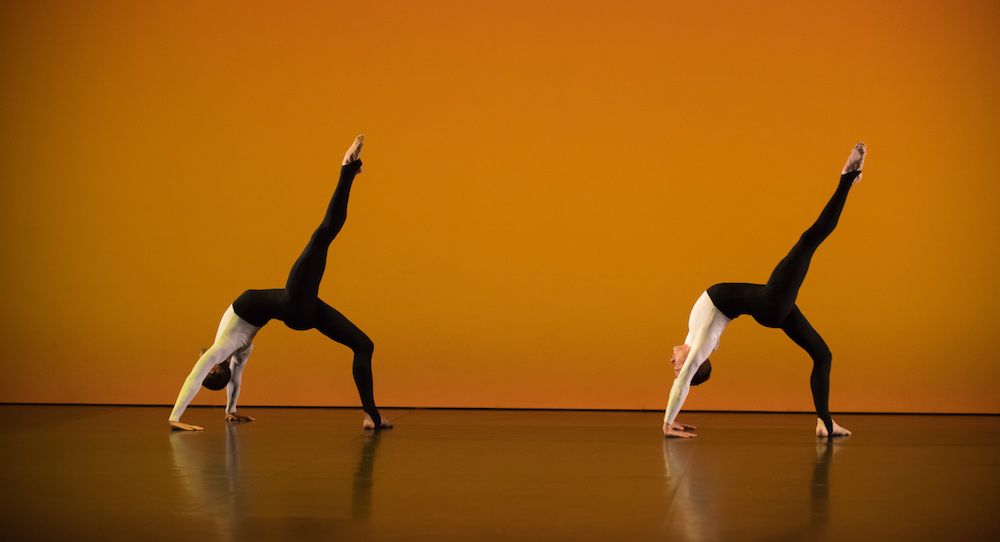 The amazing dancers of the Michael Clark Company perform expertly and with great precision in to a simple, rock ‘n’ roll . . . song. They are icily cool and expressionless, with no emotional engagement with the audience as they perform the very demanding choreography that requires extraordinary control.

First up was Act 1: Satie Studs/Ogives Composite to the insistent, unrelenting  music of Satie. The dancers are in black tights and white tops. Charles Atlas’ vivid lighting washes the bare stage with changing colours. Clark’s choreography takes classical ballet and deconstructs it, including headstands, lunges and unusual partnering. Feet are exquisitely pointed, arms are held in beautiful ballet port de bras, and turnout is emphasised. Yet in great contrast, simultaneously it is at times reminiscent of Cunningham with its raised long stretched arms, held balances and sudden skitterings. There is use of the deep Graham plié, springy pouncing jumps and a backward bourée on demo-pointe. At first, there are wonderfully synchronised moves in unison that are then developed into scintillating mini solos echoing the original formations. A woman is carried off into the wings, hanging upside down, by two other dancers; in another sequence, a dancer props a leg on a partner who suddenly hops away. Sly elements of unexpected humour where all is almost, but not quite, rigidly formal.

Then came Act II: Land to music by Patti Smith, with the dancers in slinky, flared bell-bottomed unitards in assorted mixes of black and white. The stage adaptation of Charles Atlas’ video installation Painting by Numbers on the back screen with the numbers cascading and rippling at times threatens to overwhelm the dancing. The combination of the visuals and balletic, speedy intricate Ashton-like footwork and scintillating brisé volés, as well as punk rock gyrations and some very intimate, sizzling, sculptural duets, is fascinating.

After interval came Clark’s tribute to David Bowie – Act III: my mother, my dog and CLOWNS! This very demanding work demanded a very flexible torso and featured lots more intricate footwork, swivelling torsos, finger snaps, the splits and included pointework by a blindfolded dancer. In shiny, close-fitting rippling reddish/gold unitards that at times looked dappled silver, the dancers writhed in wonderful fluid, sculptural formations, and Scottish dancing was also alluded to. Seventies head rolls and shoulder shakes are also included. One of the dancers stalked the stage and was shrouded in black with a shawl – the angel of death?

It is a rather short programme which left us wanting more.