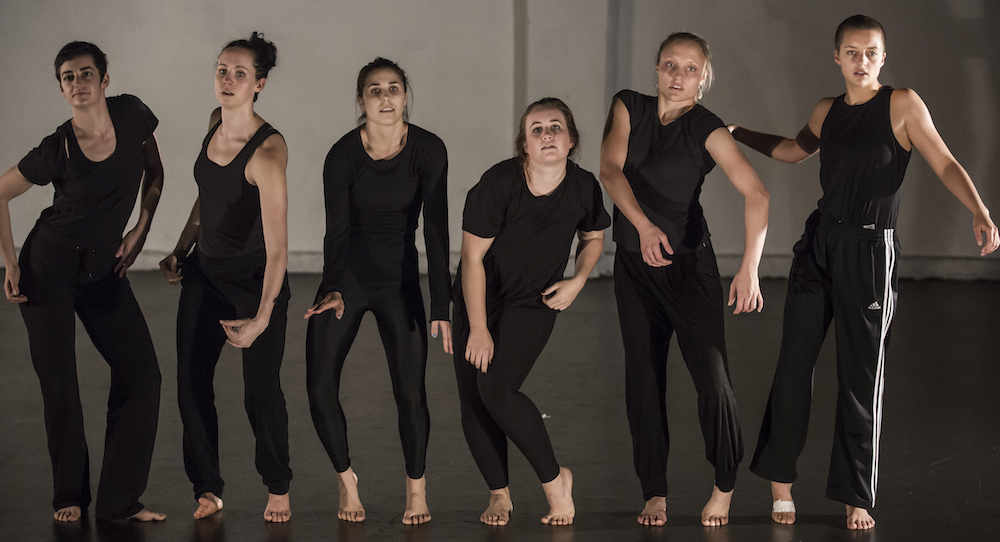 You would be hard pressed to find an independent contemporary dancer in Sydney who hasn’t had a brush with DirtyFeet. What was started by seven dancers who gathered in a basketball court to take class, DirtyFeet is celebrating 10 years as a company providing opportunities for independent dancers and impacting the community. Now with a strong annual program, the company remains at the forefront of independent dance within Sydney and shows no signs of slowing down.

Dancers Matt Cornell and Michael Smith from DirtyFeet’s ‘Out of the Studio’. Photo by Lucy Parakhina.

Out of the Studio, Choreographic Lab and The Right Foot have emerged as the company’s three main programs and now begin its 10th year with Anthea Doropoulos as the director and Sarah Fiddaman stepping down from the co-directorship.

“With Ausdance classes on back in 2005 at a local basketball court, Carol Dilley used seven dancers in a showing for a small development for a future international work,” explains Doropoulos. “It was Amanda Alford, Eva Fernendez Adan, Sarah Fiddaman, Ryuichi Fujimura, Melisa Gowen-Ribola, Calista Sinclair and myself. Over the years, it eventually became Sarah and I. In the beginning, we were learning as we went, but we both had the same goals and passion for dance, which has always been the focus.”

She continues, “We were applying for a grant and we needed a name. We were on the basketball court and our feet were filthy, and on the fly we said DirtyFeet. It was a working title and we always thought we’d change it. A year later, we were still into it, so it stuck! Now we have a strong annual program in Sydney that I am so proud of, and it has stood the test of time. We want to continue providing dance to dancers at a strong grassroots level.”

Martin del Amo has had many roles with DirtyFeet over the past 10 years. First as a choreographer in DirtyFeet’s earliest seasons (Tipping Point, 2009), he created group works which then sparked him off in a brand new direction. He then became a board member where the focus was different. “The board really focused on how we could create a place that is unique and that does what we set out to do,” he says. “It was clever how they involved mid-career artists on the board. DirtyFeet really understood well that it is a two-way street; you can help each other out. You can support each other.”

Most recently as a mentor for the Choreographic Lab multiple times, del Amo has nothing but praise for the success of DirtyFeet over the decade. “It is so impressive how they really managed to keep it going for 10 years,” he shares. “So many artists are really benefiting from the Choreographic Lab, and artists really get their feet wet and try stuff out in a supportive and constructive environment.”

The Choreographic Lab has allowed the opportunity for over 30 emerging choreographers to explore new ideas over the past decade. Thomas E.S. Kelly successfully applied for the Choreographic Lab in 2016, which then allowed him to present his work in Out of the Studio in 2017. “The Choreographic Lab really planted the seed and allowed me to work on a project I’ve wanted to for a while,” says Kelly. “I asked for eight dancers but got 14 applicants, and DirtyFeet allowed everyone to come. I had only choreographed for five people before, so it was so beneficial for my own practice, developing my own way of moving and for me to find my own choreographic voice.”

He continues, “From doing the Choreographic Lab, I wanted to keep the ball rolling, and from the footage and explorations I had was able to get a some funding. Then in being approached to do Out of the Studio, my idea changed, and I was able to create a whole other show. DirtyFeet is doing this well. If they weren’t doing this, I wouldn’t have had the first development, professional employment or met new people. There is so little funding going around to everyone, and DirtyFeet is supporting emerging artists. They are helping to push the status of arts upward instead of plateauing.”

The third DirtyFeet program, The Right Foot, offers free contemporary dance workshops for young people with and without a disability allowing the opportunity to access dance and the arts. Brianna Kell has facilitated the program over the past two years and calls it a “privilege and pleasure” to grow alongside the program.

“The heart of TRF is so open and generous, as all of DirtyFeet programs are,” she says. “But I really love how each year there are new and familiar faces and an openness to communication, expression and connections. It connects people in a context where disability doesn’t matter. Everyone is experiencing dance and creativity together. There is time and patience for each person regardless of training and ability to connect with each other and their own freedoms of creativity.”

Participant Chris Bunton began with The Right Foot in 2012, and is now a Workshop Assistant to Kell. Not only has The Right Foot given him an employment opportunity, but it has also allowed him to develop his dance skills, communication through movement and lead him to different performance opportunities. Burton says, “I think organisations like DirtyFeet are a great example of including people with disability in the arts. They bring people together to have fun, learn new skills, are included, and there is a range of diversity.”

With a decade under its belt, DirtyFeet shows no signs of slowing down. Although hopeful, yet never expectant to receive grant money, the organisation is thankful for its ongoing support from CreateNSW, donors and philanthropists, as well as its partners, FORM Dance Projects, Riverside Theatre, Shopfront Co-Op and Readymade Works. Described by its members as “a strong network”, “a strong tree with all their artists as branches”, beyond the numbers is an immeasurable reach and impact DirtyFeet has had on the independent sector within Sydney and will continue to help make more feet dirty in the years to come.

To learn more about the DirtyFeet programs and how to apply, visit www.dirtyfeet.com.au.