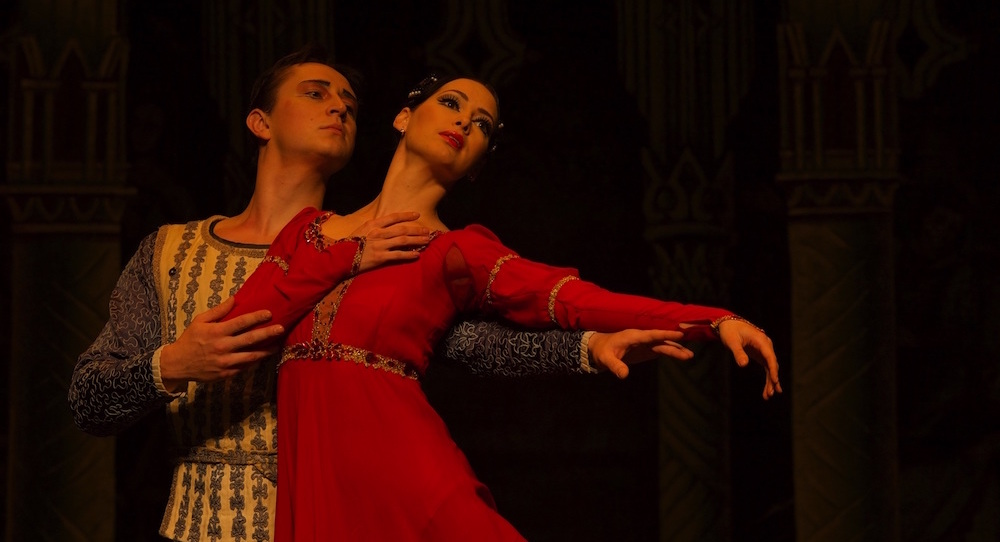 Unfortunately, I was somewhat disappointed in the Russian National Ballet’s production of Romeo and Juliet. It is a touring production, so, yes, there were some great flat sets and such (the Rensiassance tapestry designs were terrific, however, and I loved the design for Friar Lawrence’s church), but it was rather rushed and abridged, ruthlessly streamlining the narrative. The colours favoured were a dramatic red and black. And it used a recorded version of the much loved Prokofiev score.

There was no Duke of Verona, Paris does not get killed by Romeo in the tomb scene, there was no bridal morning dance for Juliet’s friends (or the alternative “mandolin dance”), and in the market scenes no acrobats dance/tumblers or procession. In this version, Juliet dances with Tybalt, not Paris, at the ball. And there was no actual balcony for the balcony scene; rather, it was a grounded yet passionate pas de deux.

Evgeny Amosov’s choreography at times was very stylised (the opening was rather striking) but was mostly a blend of allusions to the MacMillan and/or Cranko versions and possibly the Lavrosky. There were lots of high, difficult lifts in the various pas de deux. Some of it was most effective, though. The wedding pas de deux, in which Romeo and Juliet are a pulsating, entwined sculpture, was terrific. The “knights dance” (a.k.a. the “cushion dance”) at the ball was very formal and imposing, in russet colours, with the ladies fluttering their handkerchiefs.

There were many different textures and layers in the props and costumes — lots of heavy brocade and so on, yet Juliet’s outfits were simple, elegant and flattering. The tightly choreographed sword fighting was slithery, intense and dangerous.

Mercutio was splendidly danced by Savin Alexey. He was small and lithe, a darting, teasing mischievous feline with great ballon.

Our hero, Romeo, was thrillingly danced by tall blonde Parkhachev Filipp, who conveyed the starstruck passion wonderfully. In his jumps and turns, he was terrific, and he is a splendid partner, handling the difficult high lifts fluidly. He had a noble, princely bearing – one could imagine him as, say, Siegfried or Albrecht, for example.

Juliet was delightfully danced by Iuliia Nepomnishchaia. She was strong and determined, strangely rather rude to poor Paris with her refusal of his proposal of marriage. Her potion drinking scene was quite dramatic. She was splendid in the demanding pas de deux. She has a graceful “singing” line and exquisite bourées. The wedding night pas de deux was very athletic and demanding. Juliet does the famous “Ulanova run” to Friar Lawrence, but why does Romeo suddenly appear in the middle of her journey?

An interesting but rather uneven version that, while I admired the dancing, left me unmoved.