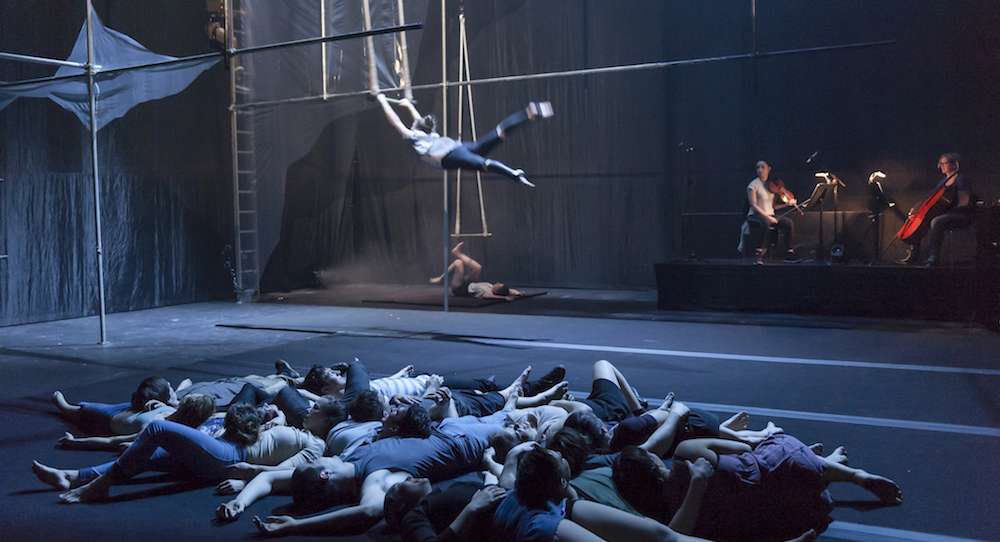 The National Institute for Circus Arts (NICA) is Australia’s training ground for contemporary circus arts. It is one of eight national arts training institutes and offers Australia’s only Bachelor of Circus Arts.

Precipice is a work created on the second-year students, but you would not know this unless you asked.  The work is easily of professional standard, and testament to the artists who led this ensemble. Precipice presents a dystopian world where violence, struggle and desperation prevail. Amidst the rubble, the performers search for humanity and connection.

The concept is created by theatre and screenwriter Stephen Sewell, and by former Cirque du Soleil artist Zebastian Hunter. The work really benefits from the expert dramaturgy presumably provided by Sewell. It is not a series of acts but rather has an arc. Furious and dangerous acrobat acts are punctuated by a motif of a performer, or two performers, in a duet about whether to take the risk and jump, or fall, off a precipice at the front of the stage. In the final scenes of the piece, a performer reflects in a monologue that it is in desperate times that we take a leap, and leap to make change.

Precipice is directed by Hunter; it seems that one of the things that this director has managed really well is assembling an excellent team. The movement is devised by ex-Australian Dance Theatre artist Meredith Kitchen, and the ensemble movement pieces make this show shocking, dynamic and captivating. There is some stunning partnering work in the first act, when the performers throw themselves at one another, and then roll together to release the impact of the collision. The design by Stephanie Howe is minimal and unobtrusive. Scaffolding frames create perches and hanging points for the artists as well as framing action, plastic wrap creates screens that obscure, to mixed effect, the action. Costuming is raw and damaged, all evoking catastrophe. Precipice is hauntingly orchestrated with live violin, cello and piano, and the liveness of these instruments lend the piece emotion. The only things that grated this reviewer, and suggested that these performers were students, was some off-count waltzing, and some effort in the acting.

If you have not seen NICA yet, you are missing out. This season of Precipice has closed. Get along next time. They are outrageously good.