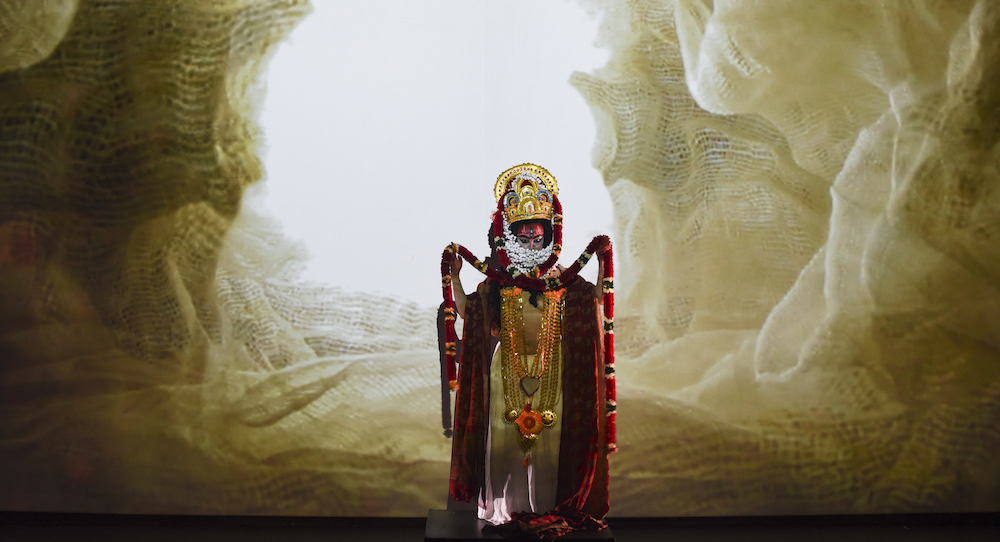 Part of FORM Dance Projects’ series at Riverside Parramatta, Urban Kali is a darkly dramatic, intense and powerful performance that is, in one section in particular, quite shocking and disturbing and packs an enormous emotional punch. 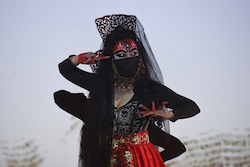 In Urban Kali, choreographer and performer Rakini Devi examines and flips contemporary cultural stereotypes of female identity, utilizing yet transforming the goddess Kali’s iconography to create a dangerous, mythic, contemporary female identity. Devi is an Indian-born Sydney-based artist with a history of dance practice since the early ’90s. She was born in Kolkata, raised with both Buddhist and Hindu family influences, and has lived in Sydney for almost 30 years. Her contemporary work draws on her Indian classical dance background, and integrates experimental film, new music and her own visual art practice. Urban Kali is Devi’s fourth dance production about the goddess Kali, who has complex roles as creator, preserver and – most powerfully – destroyer, spanning 25 years of dance practice, and follows Kali Yuga that was presented in 2004, at Riverside. Devi is in the final year of a doctorate of creative arts at Wollongong University, researching sacred to secular aspects of Hindu iconography as feminist performance. Urban Kali is a work protesting against female “shame” prevalent in modern Indian society that sanctions misogynist atrocities as “punishment”. There is a harsh look at female infanticide with statistics and stories in horrible detail, with close-ups of filmed images of hands covered in blood being washed.

For most of the performance, Devi as Kali has the bottom of her face veiled, and she wears exotic makeup throughout, accenting her eyes. Her feet (bare, no ankle bells) and hands are henna-ed red . 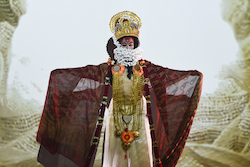 The choreography is a blend of classical Indian dance and “contemporary”, with a definite Indian base. Devi has a regal carriage and rigid yet fluid torso, a very flexible back and rippling, circling arms with, at times, undulating flower-like hands in the traditional mudras (hand gestures). At one point, Devi performs a backward heel walk. There is also use of the deep Indian plié. Toward the end, there is a “contemporary”-style slither backward, leading to some strong floorwork.

Much attention is paid, both with the set and costume, to the importance of texture and layering with a tentlike structure (with skulls) and colourful cloth draped in places.

For her first dramatic imposing, hypnotic processional entrance, there is dramatic red lighting and billowing red cloth. Depending on what aspect of Kali she is depicting, Devi wears red or black and has a high mantilla-like black draped headdress.

The soundscape by Karl Ockelford beeps, thrums, humms and has an insistent infectious rhythmic beat as required. It also included voice-overs and poetry. 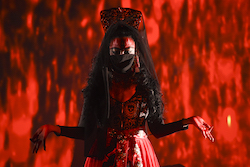 The video projections, as devised by Devi and designed and filmed by sound artist Karl Ford, included a section of close-ups of Devi’s feet, curling, stamping, flexing – an Indian parallel to The Red Shoes? There are also mandala petalled spirals, for example, and images of fire and volcanoes.