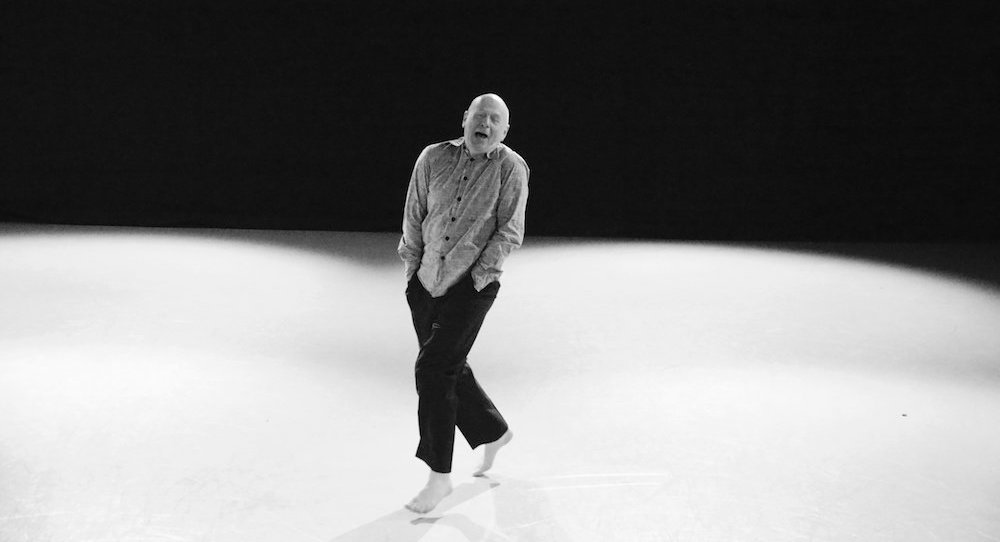 Improvisation is a volatile element in the overall chemistry of performance, not simply because it promises a measure of unpredictable deviation on stage but that it can sometimes cross the footlights and scramble the relatively safe world of the audience.

Australian performer Andrew Morrish has made a long career out of improv, honing it into a beast that may (or may not) contain comedy, tragedy, social commentary, post-modern navel gazing and sometimes even dance. Now, in his mid-60s, Morrish has embarked upon a 26-part ramble called Oh Well and, if the rumours are true, this will be his final jaunt.

On the night Dance Informa attended the first of his three Dancehouse shows, we were up to iteration 21 and on this occasion Oh Well was a comic, autobiographic hour of self-effacement and satire. The latter primarily focused on the idea of dance and its numerous orthodoxies, part of which is our expectation. Indeed, Morrish’s “dancing” was … well, not really that dancey at all. However, as the oldest recipient anyone can remember of an Australia Council Dance Fellowship, it clearly behoved him to make the point to a largely dance crowd. (What this says about the funding body in question I shall leave to your imagination.)

And here’s where things get tricky. Although we are used to performers referencing performance, effectively deconstructing their artifice on the run, it is not often that our attention is drawn to our role as audiences. However, something about the apparent absurdity of an old man getting dance funding and then using it principally to walk around talking about “whatever pops into his head” doesn’t only rattle the artist cage, it shakes up the spectator front. In an act of humorous subversion, Morrish calls into question our participation in the event. If performance is a pose, what about watching it? Are we just voyeurs or suckers? Does our embrace of a veteran, soon-to-retire solo improv artist up the level of our self-appointed cool? Or…?

Amidst the fluidity, however, one thing is very clear. Morrish is an adept and uncannily shrewd operator (even though he berates himself for his cleverness). Oh Well is more than mere mockery or undergrad provocation; it’s an opportunity to peer into the often obscured core of the social ceremony we call performance.

Or rather, it was on the night I was there. Heaven knows what numbers 22-26 will reveal.