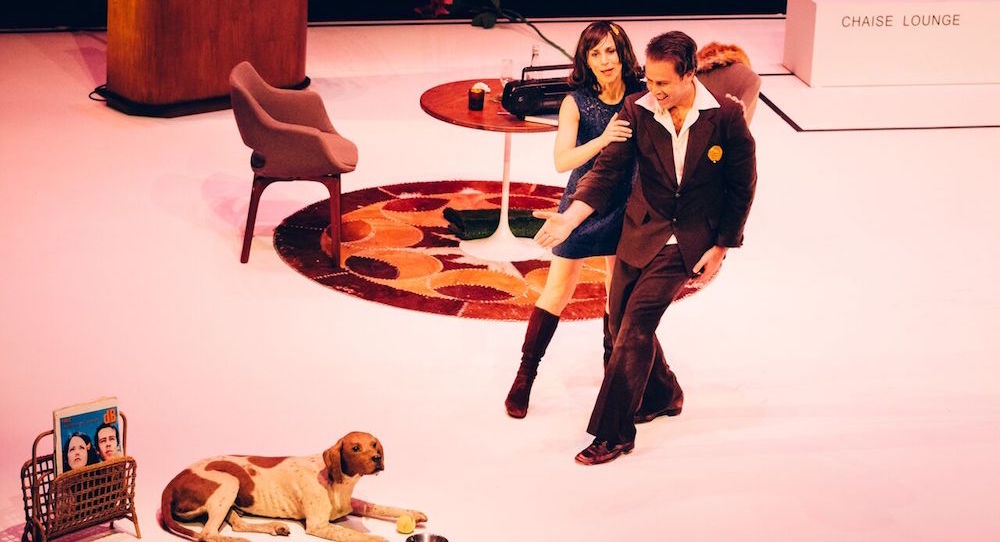 Shaun Parker’s Blue Love was at the Seymour Centre for one performance only. Sorry, readers, but I was rather disappointed in this. Individual elements were excellent, and the idea behind it (a biting social comment on romantic love and relationships) was great. However, I found it an OTT camp parody that tried to combine too many different genres. It was an uneasy mix of dance, opera, film, theatre, physical theatre, a take-off of TV shows and pop art. It wasn’t quite sure what it was. I must say, though, that most of the audience absolutely loved it, and there was tumultuous applause and umpteen curtain calls at the end. The show was originally premiered in 2005, and has now been performed internationally, including at festivals in Germany, New Zealand and Singapore, and has also toured widely around Australia. (This Seymour Centre performance is part of a current national tour.)

Before Blue Love started, there were speeches in the foyer and an excellent performance of an excerpt from The Yard.

The set (by Genevieve Dugard) is perhaps an allusion to the iconic Just what is it that makes today’s homes so different, so appealing? by Richard Hamilton (1956). There is a circular living area with tables and mats, while some of the space is curved and white. A body is outlined on the floor. Some extra large red roses are prominent. The chaise lounge is an abstract white draped plinth, clearly labelled “chaise lounge”, and the stage left door is labelled “To Bedroom”. Costumes were ever so evocative of the 1970s. Lucia Mastrantone as Rhonda Flune wore a blue mini-length dress and thigh-high boots, Parker a badly tailored brown suit. Then there were the hairstyles of that period, flowers in the hair, the draped fox fur wrap.

The show opens with free beer and popcorn being provided to the audience by Parker and Mastrantone in character as Glenn and Rhonda Flune. As Parker says, “Our characters, Glenn and Rhonda, believe that they are the perfect couple, and in believing so become the tenuous, sometimes fabricated, sometimes real storytellers of Blue Love. They and their living room become the canvas for our story as they reference film, dance, text and song in playing out their relationship.” We then learn that the show, hosted in their living room, is divided into three “acts” as we follow their voyage through some of the many aspects of love. In Act One, as in a romantic movie, Glenn Flune meets and falls in love with Rhonda. They eventually marry, and in Act Two we follow the relationship going through the many stages of courtship, marriage, career, children and the inevitable cliché of his having an affair and the eventual breakdown of the relationship. (As in a film noir, she shoots him – or does she?) Act Three is entitled “Love is a Battlefield” and concludes with a witty spoken medley of snatches of pop songs ranging from Gaynor to KISS and from McCartney and Lennon to Carly Simon. (“I beg your pardon, I never promised you a rose garden … I was made for loving you baby.”)… The songs snappily worked, and there is use of repetition and the aforementioned huge flowers.

Throughout the work, Parker and Mastrantone interact with the audience, asking questions of and making comments to them. There is a nude scene between the Flunes with a chair masking assorted delicate areas. Glenn’s only covering (apart from shoes and socks) was a strategically placed bunch of grapes – and he asks, “Would you like a grape?” Rhonda furiously breaks some off and scatters them.

The films included wonderful sequences of Latin-American dancing – one segment is mostly a close-up of just the legs. There were also allusions to French arthouse films (and perhaps Baz Lurhman’s Red Curtain trilogy). One section (an allusion to Tommy?) is an analysis of Glenn and Rhonda’s marriage  –  in stylized choreography, she treats him like an ashtray and then irons him out. Musically, it ranged from classical opera to a juke box radio blend of recent hits. Parker is not just a great choreographer and dancer but also an impressive counter tenor, and there is sweeping lushly turbulent Romantic music as well (from Cavalleria Rusticana by Pietro Mascagni).

Quirky and challenging, Blue Love is also satirical, thought-provoking and at times outrageous, and is an intriguing blend of various theatrical styles.