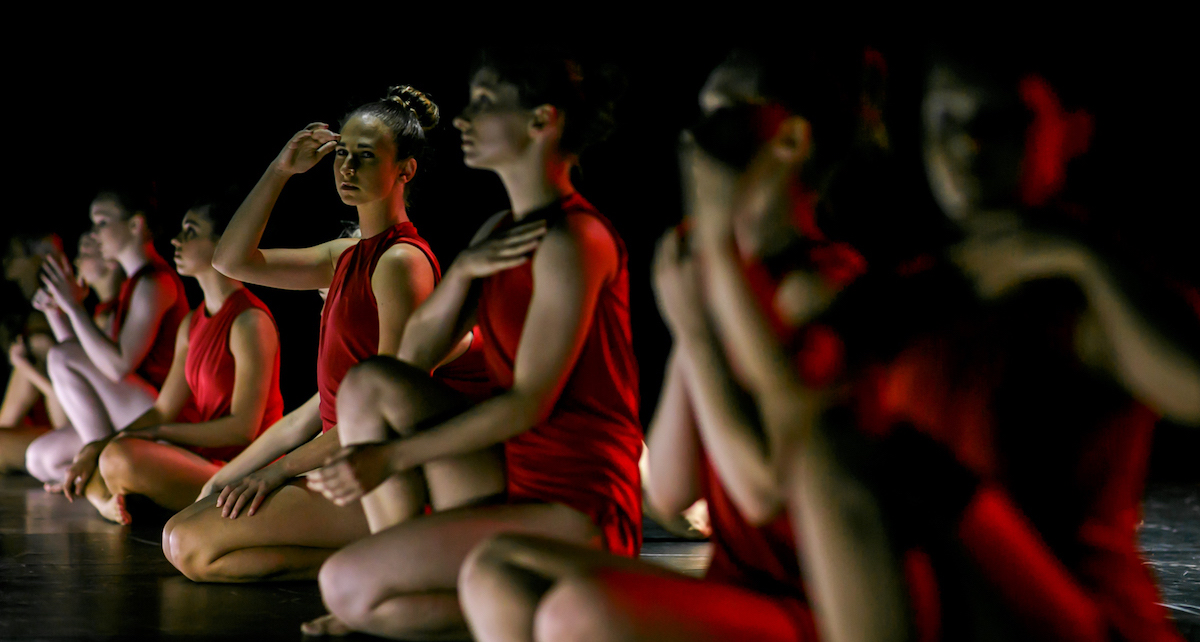 Sydney Dance Company’s Pre-Professional Year (PPY) 2016 Season showcased some very exciting performances and great talents of the selected dancers of the PPY. There was a fascinating range of contemporary styles of choreography and some excellent performances.

Corporare, choreographed by Thomas Bradley, opened the programme and utilized nine dancers. Directed improvisation was used to find exterior motivations for the dancers’ physicality. This morphed into props such as ropes, ties and jackets, making us notice the distorted restriction and deformation that these enforce on the human body. The lighting was also often restricted, with just a small corridor of light or a snapping on and off. I have noticed this as a trend lately in several performances, but this use of lighting made it so dark that it was hard to see the dancers. The music beeped, clicked, thrummed and throbbed, and vocalisaton was also included. As we entered and took our seats, the dancers were already on stage — one young man apart from a group in a curved “S” shape. It was as if the lone man is threatened by the group. Small, tiny movements — of the shoulders, hips or face — were used at first. There were some intriguing lifts, rolling floorwork and excellent partnering. The work also had a Butoh feel at times.

The second work was the striking, impressive and very demanding Pieces of Cella, choreographed by Narelle Benjamin. The piece was short and dream-like. This evening’s performance featured the second cast, Amber Jackson and Lisa McLaughlan. It was performed in unison and was as if they were mysterious mermaids underwater with their long, rippling hair. The cast were barefoot and wore casual grey/blue rehearsal clothes. Long, stretched and rippling arms were required of the dancers, as was an almost contortionist flexibility.

Zachary Lopez’s rather puzzling Like a Salmon in the Sahara opened with blinding, flashing lighting effects. Strobe lighting and blackouts were also included. The cast were all in white, each costume slightly different. Isabella Bonanno as the runner runs on the spot constantly for the entire work. Lopez’s work is frenetic, with lots of runs. It is meant to be about “imagining a space where there is no space, but your journey is to get there whilst exiting from another space”. Or is it? Is it about refugees? Or salmon spawning? There were challenging lifts in the pas de deux, extensive use of running, small repeated everyday movements and some quite dangerous tightly choreographed slides, slips and drags. The true blue Australian way of life was evoked with the use of Bob Brown’s Give Me A Home Among the Gum Trees, as the dancers were exuberantly running and cracking party poppers with streamers, with the refugees’ sense of isolation and otherness with the solitary single woman.

After interval came Kristina Chan’s wonderful Pacific for the entire ensemble. The work’s theme was the Pacific Ocean and was “made up of images, memories, dreams, experiences” that Chan has when she thinks about the ocean. It was mesmerizing, powerful and hypnotic. The large cast wore water-coloured costumes of various shades of blue and green. The dancers, in lines, acted as the waves, breaking, rising, falling, eddying and swirling, sometimes still and rather peaceful but at other times fast and furious. They writhe and pulsate like coral underwater, or form groups of rockpools. Tightly controlled slow motion is used, and Chan’s choreography required difficult back bends, twisted lifts and catches, and backward slithers on the floor. Pan Sonic’s music beeped, throbbed and hummed, and Benjamin Cisterne’s marvellous lighting took us through a day on the water.

The final piece was an excerpt from Rafael Bonachela’s 2 One Another. The cast (again, the entire ensemble) wore unisex red leotards. Bonachela’s demanding choreography dazzled. Nick Wales’ haunting, and at times rather elegiac, music accompanied the dancers’ wonderful performances. Bonachela’s choreography required unusual lifts, some quirky arm and hand movements, and long sculptural lines. The duets, quartets and trios flowed easily out of the crowded ensemble work, with a tiny, intimate touch leading to a twist or change of movement. The dancers were very precise. At times, they seemed boneless. They were all rather neutral in expression but relentless in their commitment. The duets were captivating.

One of the dancers has already been chosen to join Sydney Dance Company as a trainee and so did not perform in this programme. But the dancers who did showed fearlessness, almost bonelessness, great concentrated focus and the control to perform in an ensemble. We saw a mix of sizes, body shapes, looks and talent. Course Director Linda Gamblin and Supervisor Shane Carroll, combined with their team of teachers and choreographers, have done a terrific job in preparing them for a performing future, beginning with this exciting show.