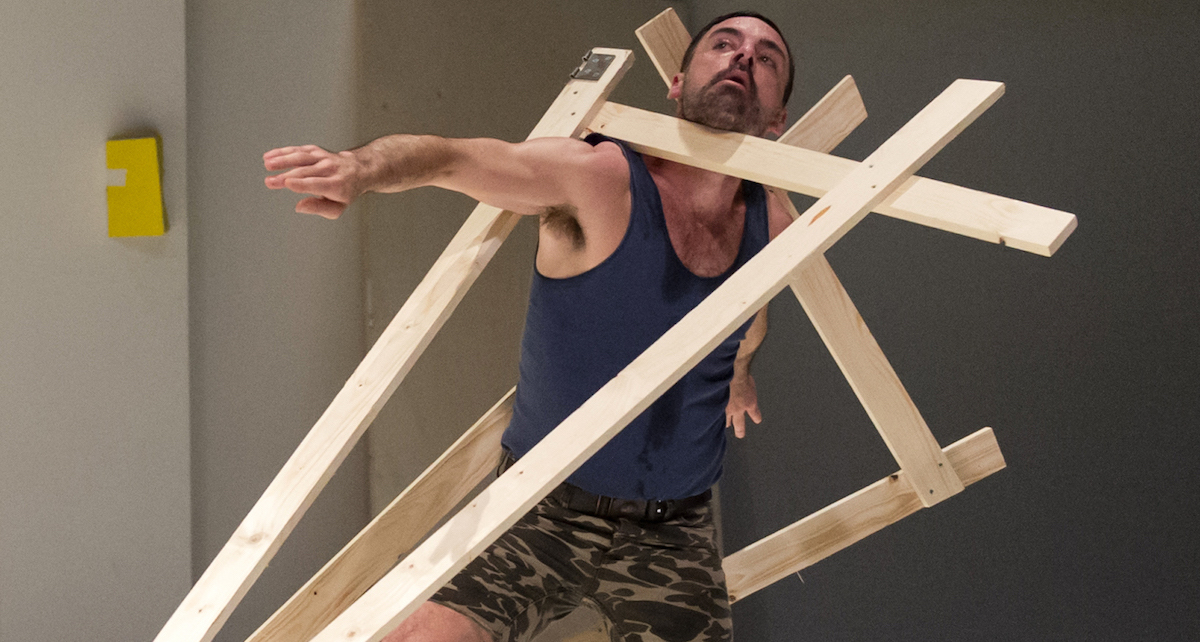 The notion of durational performance is one packed with ironies. Indeed, we could very well argue that what we witnessed on a cool Saturday afternoon with Matthew Day wasn’t performance at all.

Although Day’s ongoing Assemblage #1 project began its public life earlier in the week as a standard one-hour performance, this more fluid version is at once more ambitious and harder to encompass. With its deliberate lack of ceremony, and in a space that is at once dressed but brightly naked in the daylight, this three-hour iteration has a meditative quality. There is almost no show. No arc. No point.

Alone on the floor, Day moves in, through and around his sparse set with a mix of dance discipline and everyday casual movement. At times, he seems as undecided and awkward as any of us might be during the course of an ordinary day. It gives the “event” an edge of voyeurism, as though we had wandered unintentionally into a space to find a lone man moving in a kind of contemplative trance. We are prompted to wonder if in fact we are interrupting a private ritual just by being in the room with him.

To the sound and organic feel of amplified birdsong, we enter a cold, urban rectangle, lightly populated by objects – detritus. Day manipulates, moves around, drapes, drags and dresses himself in these materials, creating a sense of impermanence and, furthermore, dissolving the very idea of beginning and end. In this unbounded temporal, spatial and performative arena, the audience is left to float or drown, as they see fit.

Of course, you don’t attend durational works for adrenalin and excitement. It lacks the typical spoonfed sugar highs we get from Hollywood or big stage musicals, or even the neatly twisted plots of good drama, and instead leaves you untethered in a space and a time that you are free to “fill” however you wish.

Dance lends itself well to this mode, and Assemblage #1 duly discards any sense of narrative, linear meaning or catharsis. At one level, it’s dry and refined – an acquired taste; at another, it creates an opportunity for a rare kind of quietness. What we construct in that hiatus is up to us, but what we walk away with is a calm sense of all restraining structures having been melted down and all possibilities becoming allowable once more.