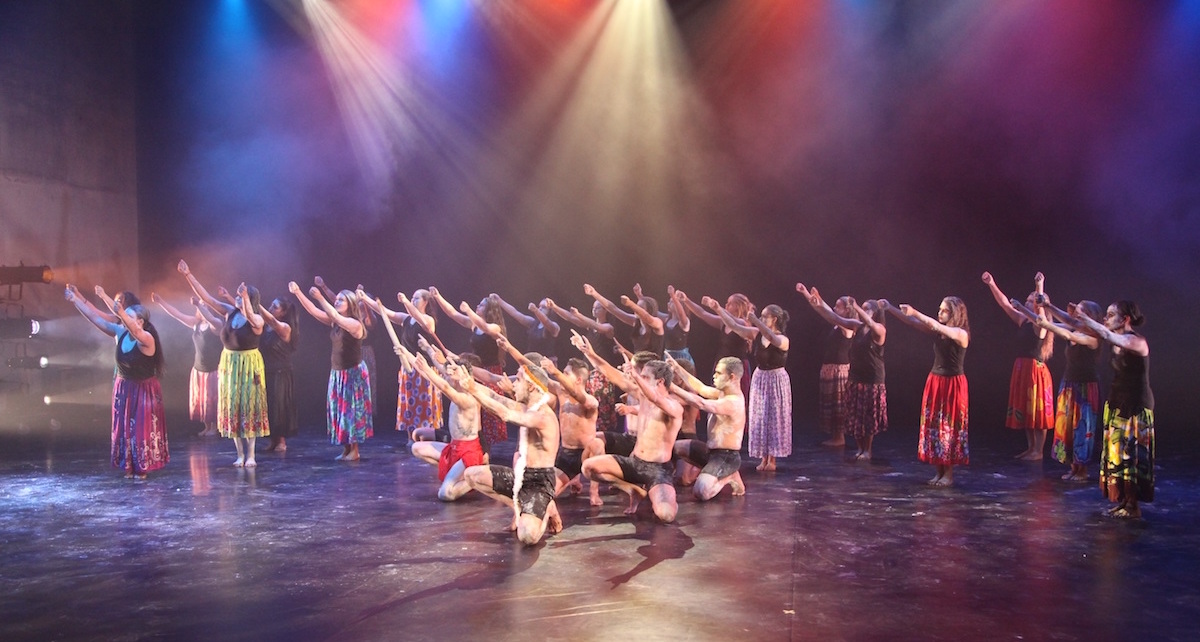 The production was devised in three parts: Past, Present and Future, combining newly commissioned works from three guest choreographers, some vintage works from Carole Y. Johnson (one of NAISDA’s key founding figures) and student works, and concluding with some traditional Aboriginal dances and songs of the Yolngu clan from North East Arnhem Land with their traditional Banumbirr (Morning Star) pole.

The accompanying printed program that was available was most informative, providing a historical background and context to NAISDA’s emergence as a training institution in the 1970s, as well as choreographers’ notes that helped to clarify the symbolism and intent of some of the works. As a school, NAISDA’s dancers are more diverse in build, technique and style than the graduates of many other tertiary dance programs, which is great.

There was a lot of anger and turbulence, from the reworking of the Embassy of the 1970s as reimagined by Vicki Van Hout through to current times with references to Bill Leak’s controversial cartoon and the recent Kalgoorlie violence. Van Hout’s work included the creative use of props (a vacuum cleaner pipe used as a didgeridoo, for example!), including tent-like structures that fluidly shifted, controlled and restrained the dancers’ movement — at times like a ship with sails, at others like a bulging camel. The way Aboriginals/TSI people are treated and insulted was included with all sorts of awkward, impolite questions being asked in the line-up at the microphone. There was a section where cans were used as a wall, and this developed into references to glue sniffing by young people.

Johnson’s Brown Skin Baby solo (danced with haunting grief and power by Coleen Jerrard), with its Graham-style choreographic influence and a cry from the heart for the Stolen generation, also reminded  us of the African-American tradition of dance activism that was a crucial part of  NAISDA’s early years. Omer Backley-Astrachan’s Blinders (choreographed in conjunction with Certificate III students) is a striking, compelling work, and the combination of Elvis Presley’s melancholic “I Can’t Help Falling in Love” with glorious photos of the Australian landscape made a lasting impression.

Also included were excerpts from Elma Kris’s Emeret Lu and About, originally created for Bangarra Dance Theatre, which showcased the trademark Bangarra blend of lyrical contemporary and Indigenous dance at its best. Later, the solo by Jonathan Brown, Dark Side of Me, was a highlight, with its dark splintered menace and fractured despair. Institution, with its chilling atmosphere of Lowood, was haunting for its evocation of how the stolen generation of Aboriginal women were harshly treated.

The lighting for all of the works was extremely effective. There was also an exhibition linked in which had fascinating posters, photographs, newspaper clippings, videos and other memorabilia charting the history of NAISDA.

From Sand to Stage was most exciting programme showcasing some wonderful graduating talent. Looking forward to many more years for NAISDA!