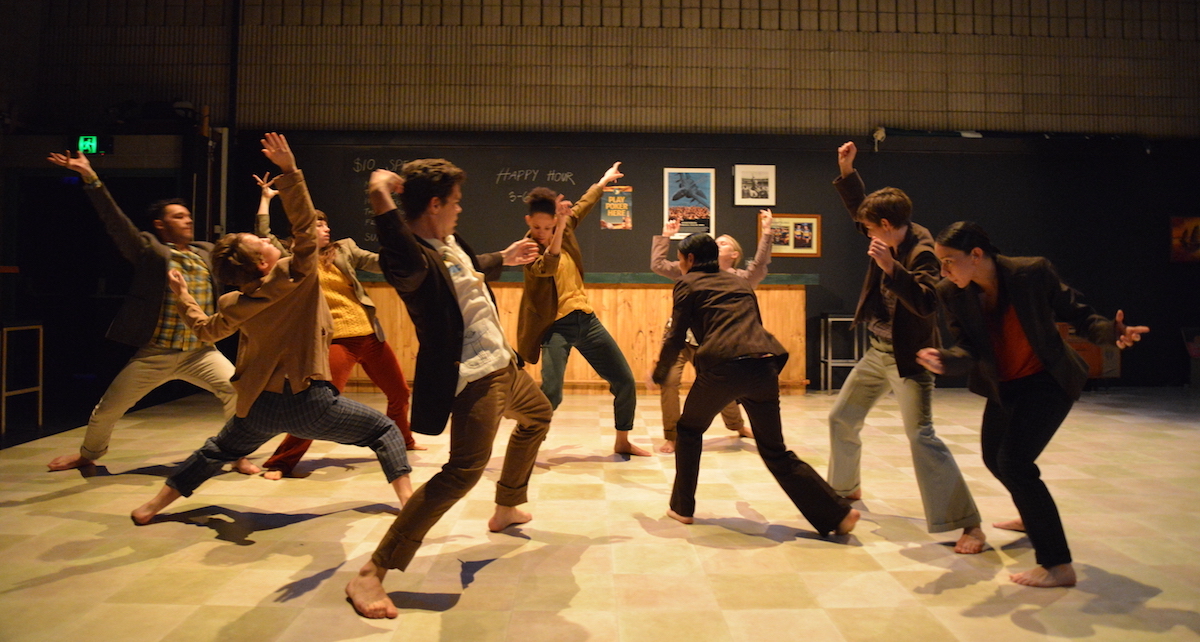 DADS is part of the wonderful FORM Dance Projects season at Riverside Parramatta and was produced by the Dance Makers Collective.

It was at times biting, witty and very funny; while in other sections, it was quite sombre and reflective. There were quite a few choreographic “inside jokes” for those who are aware of the independent/contemporary dance world — both in the voiceovers and choreographic allusions. The performers are linked to their fathers through the use of voiceovers of recorded interviews.

This work is about fathers, their influence on our lives and in this work, and also about dads dancing (or their fear thereof). The contemporary dance sections are developed from voiceovers of the dads’ memories – the difficulty of learning to waltz, awkward teenage parties, discovering their feet can be graceful or stumbling –  which occasionally have obvious links but often not. DADS was most enjoyable but had a perhaps slightly unfinished feel.

Through interviews with their dads and sessions in the rehearsal studio, Dance Makers Collective reveals a hidden world of dance practices including carport parties, door knobs as dance partners, sherbets for Dutch courage and the use of dance as a pathway for recovery.

There is a terrific backward slithery opening solo holding a glass of beer, which then turns to a strong section using the exuberant, passionate voices of the Dustyesky Russian Men’s Choir from Mullumbimby as the nine dancers (male and female) move as a cohesive ensemble with fabulous timing and phrasing. Short solos occur — individuals scintillating for a brief moment in the spotlight before returning to the synchronised, tightly controlled gesturing full of tiny details and frenetic pacing of the group. At one point, a solo was like a rippling, darting fish; a different solo was far more angular with the use of elbows.

Unfortunately, the words of the fathers’ voices are often hard to understand, as they seem to be amplified from what appear to be recorded phone and intimate home conversations.

Technically, the performances were amazing. Small, repeated phrases of  movement were used, concentrating on tiny details (such as the miming of smoking), as was a very acrobatic balancing act on a sofa (perhaps an allusion to Circa?), Ballet technique, contemporary, breakdancing and tango, as well as nightclub style dance, are included.

Popular music is used — golden oldies from the performers’ dads’ dancing days, such as “Only You”, and songs from Dusty Springfield, the Beach Boys and more. There are runs, rolling floorwork, a nasty choreographed fight. The tango sequence previously mentioned, with sizzling, flicking legs, becomes an extremely intimate sequence reflecting on the friendship of various dads and also father/son relationships. Dancing home alone, “Good Vibrations” turns into a silent primal scream.

DADS is quite revealing in parts, warm, thoughtful and funny. The audience loved the celebratory finale with some of the fathers joining their progeny on stage in a chorus line all gyrating to “I Will Be Alright”. In fact, a couple of the dads were the most impressive dancers!