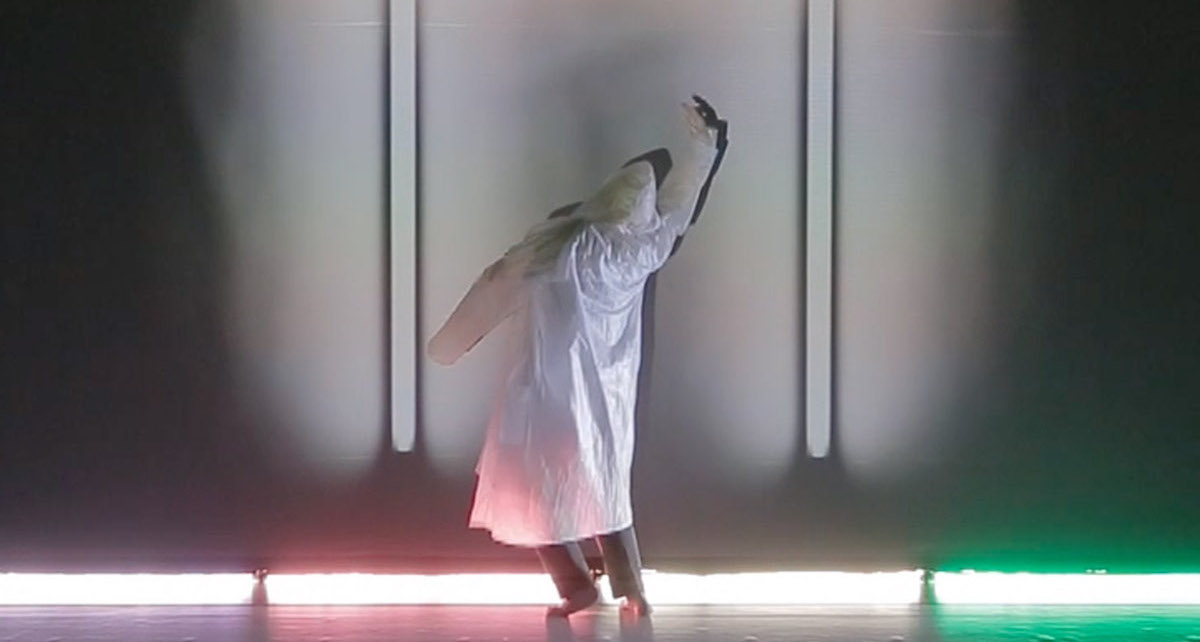 Metadata is a striking, hypnotic performance work comprising two connected pieces, Pure Light and Moths and Mathematics, created by leading dance, video, sound and animation artists from Melbourne and Sydney. Six years in the making, combining dance and science, Metadata examines the latest developments in physics and cosmology, as choreographers Tess de Quincey and Peter Fraser explore a universe of colour, reverberation, particles and impermanence. Microscopic realms become a starry galaxy — a universe of shifting patterns, where the performers and audience are transported into an intimate, yet epic, parallel world “where the intangible becomes substantial and real”. 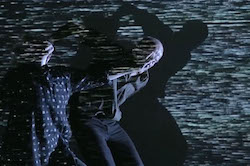 A mesmerizing solo by de Quincey, Pure Light opens the program. It is typical of de Quincey’s trademark personal style, full of extreme control and minimalist gestures and movement, developed from the butoh-inspired Body Weather and with echoes of her recent Moondance in some ways. For the first part of the work, de Quincey has her back to the audience and is a barefoot, mysterious, hooded shadowy figure in a white leotard and semi-transparent coat. There is a hint of menace and aloofness. At times, her face is partly veiled, and you can see a Kabuki mask-like effect. Some of the dance is sculptural, seemingly inspired by Asian deities. The use of shadow is important, as is the beeping, thrumming, pulsating soundscape by Pimmon and Warren Burt. In one section, it is like a huge mass of rushing water, and de Quincey is buffeted by the sound.

Another section features an analysis of different styles of walking (various stiffly hesitant stumbles, feet turned in), combined with various arms. In an earlier segment, it is as if de Quincey is falling or floating with stretched arms, and it is perhaps in some ways a homage to the Fokine/Pavlova Dying Swan. There is a lot of use of high demi-pointe and deep plié. De Quincey’s hands are incredibly articulate.

Lighting by Sian James-Holland and the video by Martin Fox deserve special mention. Shadows are very important, but there are also flickering side lights, colourful lights from the floor, vertical hanging lights on either side of the stage and exquisite washes of colour on the back panel projection screen, sometimes delicate and at other times reminiscent of a sunrise or sunset. The fluorescent lighting is a homage to American artist Dan Flavin.

The second work was Moths and Mathematics, exploring the unfolding space between two beings, utilizing the underlying maths and physics that shape life and matter. It is as if the two dancers (de Quincey and Fraser) are inside a computer.

The lighting/visual animation by Boris Morris Bagattini begins with small blips of light – like darting fish – on the side walls of the theatre and then develops to become complicated lines, swirls and graph patterns on the back panel projection screen. Both dancers are barefoot in black leggings with patterned sleeveless tops.

Warren Burt’s soundscape begins with minimalist piano and includes scurries by string instruments and soaring “galactic” music toward the finale. It beeps, gurgles, whistles, throbs, pulsates in a complex layering of mathematical structures that reflect musical traditions from Conlon Nancarrow and Ryoji Ikeda back to Bach.

For most of the work, the two performers perform apart. In one section, it is as if they are floating underwater. At one point, they stand swaying, tilt and almost fall. Slow, controlled sculptural entwinings and body conversations are contrasted with robotic movements blended with angular elbows and Tai Chi martial-like movements. Fraser performs some feline floor work; de Quincey creates a star shape pattern on her back. Toward the end, Fraser is guided forward with his eyes closed (and with de Quincey’s hands over them), and then de Quincey has a brief angry solo like a furious cat, before there is a glorious galaxy of stars and a futuristic embrace to soaring music before the two are again separated and walk hopefully toward us.

There were conversations after each performance with the artists and invited scientists in an arts-science exchange. A guest physicist, cosmologist and astronomer discussed some of the latest developments within the science field in the context of the production.

MetaData is a compelling, mesmerizing performance.