When the Melbourne Ballet Company (MBC) declares that its 2016 season will fall under the twin banners of Intention and Desire, you are immediately alerted to the fact that this independent dance company burns with a fire of a very particular nature. Speaking with their resident choreographer and driving force, Simon Hoy, simply confirms this.

“Ballet is evolving and it needs to,” Hoy tells me from his temporary base in St. Gallen, Switzerland. “We need new ideas, new expressions of the art form.”

Dancing professionally since 1996, the Australian Ballet-trained Hoy worked extensively in Europe and America, including a stint in New York with the acclaimed Cedar Lake Contemporary Ballet. Since his return from the Big Apple, he has worked tirelessly to make MBC the touring contemporary ballet juggernaut it is today. Indeed, he and company founder Alisa Finney have gotten MBC to the point where it will present three brand new works, over 30 performances, 50 masterclasses and a winter school this year.

Of the Intention and Desire motif, Hoy says, “I was looking for something descriptive in terms of where the company’s been. You know, we’ve been together for nine years and we’ve always been very conscious of developing new Australian work whilst keeping to a classical base. Although we don’t do ‘repertoire’ as such, no Swan Lake and that sort of stuff, we always wanted to achieve a repertoire that nobody can do as well as we can.”

2016’s headline trio clearly revolve around the core themes. Veil Of Maya, Empyrean and Guernica touch upon notions of love, war, heavenly light and human failing. In addition, they will feature choreography from some of Australia’s best dance makers, including Tim Podesta, Tim Harbour and Rani Luther.

As Hoy describes it, “Everybody is keen to do something that is reflective of where the company is but also to try and find a new way of expressing the next chapter of the Melbourne Ballet.” 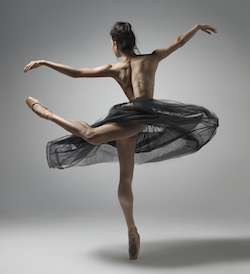 One thing, however, won’t be changing this year: namely, the company’s commitment to bringing quality contemporary ballet works to regional audiences. The 2016 schedule includes performances in Coffs Harbour, Byron Bay and Horsham, as well as a jaunt across the ditch to Marlborough in New Zealand.

On this topic, Hoy is especially passionate. “We work hard to take this genre of contemporary ballet to places that are a bit wary of contemporary dance,” he explains. “But over the years of touring, we’ve managed to create a good following for this genre because it’s a more appropriate way of expressing ballet. You know, I come from a very classical background, but I’m always looking for new and exciting ways of expressing ballet.”

With their repertoire of richly psychological works, MBC stands apart from the tutu ballet of fairy tales and 19th century fantasy.

“Our repertoire is a lot more classical than, say, Sydney Dance Company or Chunky Move, and so therefore it’s a little more accessible to kids learning ballet and also for people who maybe don’t want to see pink tutus constantly,” Hoy argues. “But you know, that idea that you’re either in the contemporary camp or the classical camp is a bit old-fashioned. I would say that we’re very much inspired by both.”

Like virtually everyone else working in the broader ballet world, Hoy is well-versed in the ongoing arguments around access. As dance continues to be defined in the popular imagination by short attention span TV routines or arcane contemporary indulgence, the notion of ballet can seem too hard, too elitist or just plain old.

“I read a number recently that there are more kids in Australia learning ballet than there are playing football, mostly little girls; but you know, it’s hugely popular,” he points out. “So it’s important to give people access to professional-level dance.”

With its regional touring commitment and policy of creating opportunity for Australian dancers and creatives to find meaningful work in this country, MBC endeavours to make the “access” word a tangible reality for audiences and performers alike.

From the distance of Switzerland, where he is working on an annual “autumn ball” project, Hoy is able to reflect upon one the more problematic features of the local industry.

“I also think that there are far too many elite-level dance schools around turning out graduates when there’s no employment,” he says. “You know, one of the reasons we’re in existence is to offer employment to dancers and choreographers.”

If ever the themes of Intention and Desire are to leap out from the company media kit and become real, this is how. As Hoy concludes, “We invest very heavily in artists.”