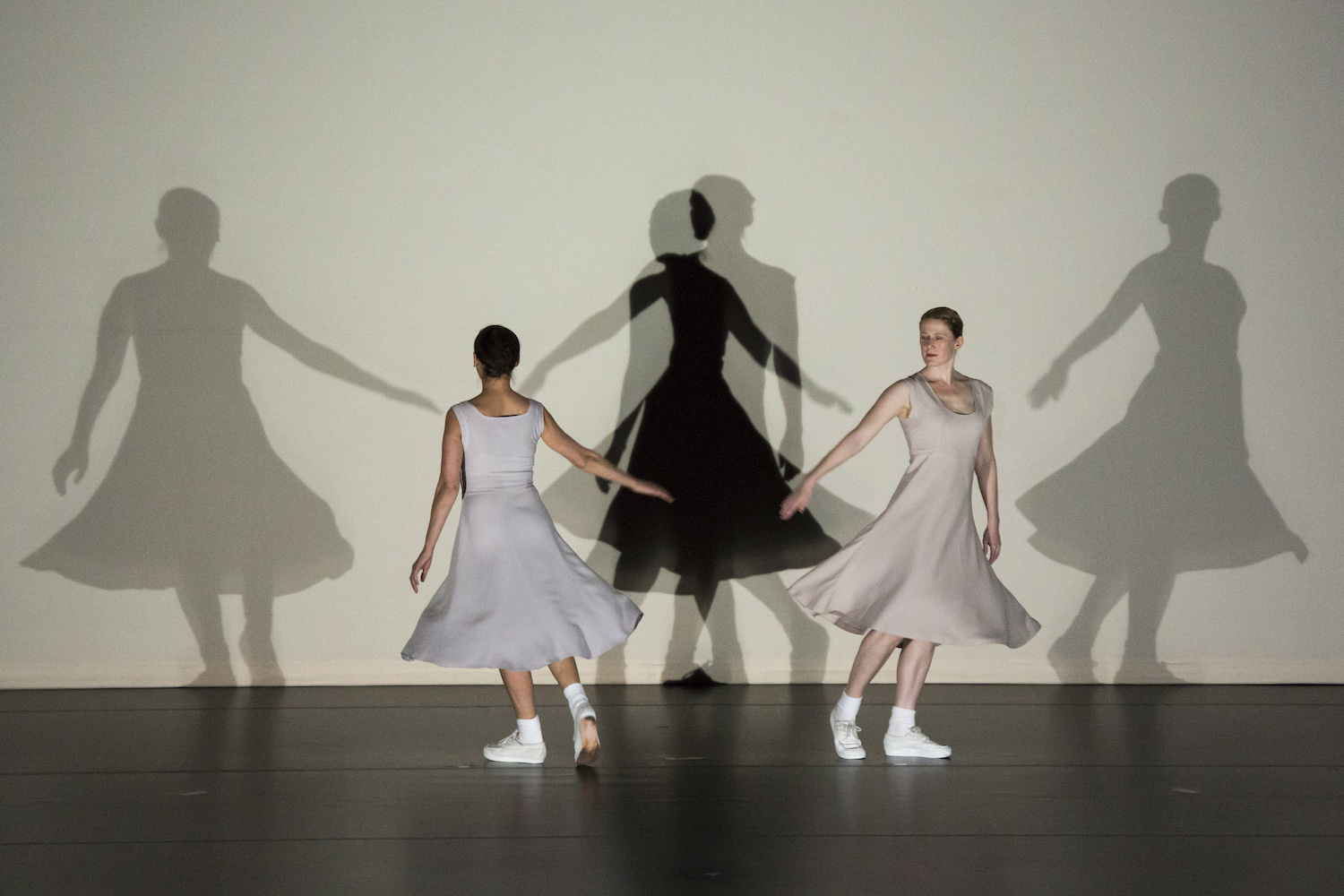 Fase is considered a seminal work in the history of contemporary dance. First conceived and performed in 1982, during the era of American minimalism, this work is demanding on both performers and audience. The repetitive cycles of simple movements build in intensity to imbue the movement itself with a life of its own, which in turn drives the dancers to continue almost against their own volition.

What sets this work apart from previous modern dance structures is its extreme physical intensity. Anne Teresa de Keersmaeker, a Belgian choreographer and founder of Rosas dance company, explains, “American minimalism had always been connected to the notion of distance and coldness, whereas Fase has an extreme physical intensity with a kind of emotion embedded in the physicality, which was quite different.”

Fase is created around four phases, comprised of three pas de deux and one solo, each phase based on a mathematical structure.

Phase 1, constructed around the ideas of circles, is a mesmerising repetition of two dancers walking a straight line, pivoting and returning. An added dimension comes from the simple lighting, which casts shadows and creates the illusion of three additional performers – all dancing in entrancing and surreal synchronisation. From the opening bars, the pace is full speed with no relief as the dancers seem to be in a constant state of turning in their circular skirts. I get dizzy just watching them! De Keersmaeker herself is one of the dancers and has been dancing Fase since its creation over 35 years ago.

Phase 2, or the violin phase, is a solo danced by De Keersmaeker using the motif of the pirouette and the circle creating a link to the first section. This phase is lyrical with a more free-flowing and expansive feel concentrated around a large circle traced on the stage. As the intensity builds along with the pace, the technical audacity of this phase leaves the audience holding its breath until the solo finally reaches its climax.

Phase 3 takes on a masculine nature. This time, the dancers wear structured, architectural suits as they repeat a series of arm and torso movements with highly mathematical precision. Seated on high stools, the choreography is constructed around four points on the square stools. Despite the simplicity of the movements, there is an unspoken dialogue going on between the two dancers, which develops in intensity along with the movements until reaching a barely controlled violence.

Performed more than 160 times around the world, De Keersmaeker not only conceived and choreographed Fase but is herself one of the two performers. Now in her 50s, this equates to having performed the work across a span of more than 35 years. With her engaging wry humour, she says, “If I knew I would still be performing Fase at this age, I would have created Phase 4 quite differently!”

This final phase is considered the most intense and challenging, based on the mathematical construct of a diagonal. It involves the simple, but exhausting, movement of jumping and clapping.

Throughout the performance of Fase, the audience alternates between a type of hypnotic attraction to the endless repetition with its growing intensity, and wishing the whole thing would finally come to an end. At the same time, one is aware that we are witnessing a work that is above and beyond the norm.

Part of the attraction and engagement also comes from the simplicity of the movements, which the audience members easily recognise and quite possibly even try to replicate when they go home.

What may not be so obvious is the extremely technical and exacting nature of this work. Despite the minimalist style of the overall piece, there is an expansion and evolution within each phase, an intensity building from accumulation.

At certain points, we are struck by the seemingly impossible perfect synchronisation until we notice a slight drift of pace by one of the dancers. Oh, oh, someone’s lost it…no, wait…how did they manage to re-sync? De Keersmaeker explains that this “acceleration and deceleration starts to shift in order to get different relationships in time until they’re again together. It’s extremely simple but very refined.”

The music, by composer Steve Reich, is “difficult music” – there is no immediate invitation to dance with this music; rather, there is a challenge to dance. De Keersmaeker describes it as 14th century music brought into the 20th century.

By the time the performance draws to its conclusion, we feel exhausted and exhilarated, having been taken on an interesting and indefinable journey. This was a journey both rich and slightly terrifying, but one which I wouldn’t have missed for the world.