In the eyes of many dancers, Broadway shines like a beacon at the peak of the show-biz mountain. A greater thrill than appearing on the Great White Way is hard to fathom!

Up until a few months ago, this was certainly true for Anne Otto. But as an original cast member in the 2011 box-office hit Hugh Jackman, Back on Broadway, she was on the shortlist of performers to call when the titular star’s goal of bringing an expanded version of the glittering musical memoir back to his home country became a reality. Thus began an adventure beyond Otto’s wildest dreams: An arena tour around Australia in Jackman’s newly titled show, Broadway to Oz.

On the eve of opening night at Melbourne’s 14,000-seat Rod Laver Arena, we caught up with Otto for the inside scoop on the extravagant production. 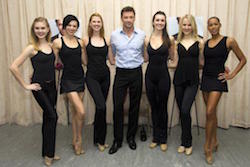 This journey with Hugh Jackman began back in 2011. At that time, did you have any idea that it would span over four years?

“Throughout the Broadway run, there were rumors about taking the show other places, but Hugh’s schedule is beyond busy. As a personal rule, I try not to look too far into the future. Rather, I savor every show as if it is my last. And I don’t assume I have a job until I have a contract and am in rehearsals.”

Broadway to Oz is larger in both scope and scale than the original production. How is the experience different for you this time around? Was it difficult to get in sync with a whole new cast in only a couple of weeks?

“The show has changed dramatically, but it has the same skeleton as the Broadway original at the intimate Broadhurst. Every number has been blown up to accommodate the 12 to 15,000 people in each arena. It can be a little daunting to rehearse in another country and move into a cast of 14 others you don’t know, with a 35-piece orchestra and the 75-member Australian Girls Choir on stage.

We had two weeks of rehearsal and tech, which meant every moment counted. In general, one of my favorite things is when you first start to run a whole show in rehearsals and see the pieces come together. In this production, there are moments for each person to shine. The Australian cast is a joy! In addition to being hysterical, they are energetic and ready to give it their all every day. I have really enjoyed this experience.” 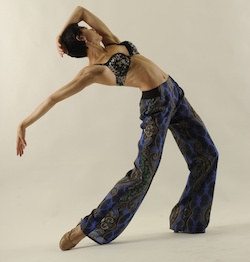 “Working with Hugh Jackman is the absolute best! He is gracious to all of the cast and crew, and he works harder than anyone in the room. It is an inspiration to watch him focus throughout rehearsals and then go on stage and tell his stories as if it is the first time. He is a true showman! He can read an audience like I’ve never seen before.

During our Broadway run, he would spend time signing playbills at the stage door, in addition to taking pictures and visiting with people after the show. (How does he have so much energy?) He is also very involved with charity. He extended our time on Broadway to continue to raise money for Broadway Cares/Equity Fights AIDS. I have learned so much from watching him. When I am having a hard time keeping my momentum, am struggling with a cold, et cetera, I look to his amazing example of loving every second on that stage!”

Do you have a favourite number in the show?

“Of course, my first reaction is to say, ‘Steppin’ Out’, in which I get to bring Hugh his jacket and partner with him. On my first day rehearsing with him for Broadway, I could barely speak. I couldn’t believe it. I thought, ‘I get to dance with Hugh Jackman?!?’ As time goes by and with each new experience, I just enjoy it more! This is all about him, and I’m thrilled to be along for the ride.

I also love ‘On Broadway’ and ‘Luck Be A Lady’. Both pieces strike a deep chord with me. Warren Carlyle, our director/choreographer, did a wonderful job of capturing the spirit of old school jazz. There is no sweat involved, just style. The movement has a grounded, sleek, sexy feel to it. Warren likes to say, ‘You are very expensive!’ I absolutely agree. My soul lives in those numbers. They remind me of my love for New York City — and how much I love dancing!” 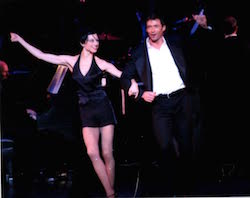 Last year, you were on tour in Chicago. Now you’re back on the road again, and in another country, no less. How do you unwind/stay sane/keep your mind and body happy while you’re away?

“First thing every morning, I enjoy my coffee and a bit of writing. Luckily, every hotel room has a desk. I put on some calm music, light a candle, and write whatever comes to mind. Then I do my body warm-up and vocalize. I have a travel humidifier that helps me stay healthy in stale hotel room air. It can be scary to work in new places, but each exercise reminds me that no matter where I am, I can do my job.

I also have my pre-show rituals: makeup and hair, followed by a ballet barre, mic-checks, et cetera. Of course, chats with my husband can break me out of whatever mood I’m in. He gives me wonderful advice! He has the ability to reach me in the sweetest ways, even when I am across the world.”

You get back to the city on Christmas Eve. What’s the first thing you’ll do when you get home?

“I feel so fortunate knowing that I’ll be home before Christmas! The first thing I’ll do is to enjoy a huge hug from my husband. After I unpack, we’ll probably break out a bottle of wine and tell stories. This time, we might even trim the tree!”

By Leah Gerstenlauer of Dance Informa.