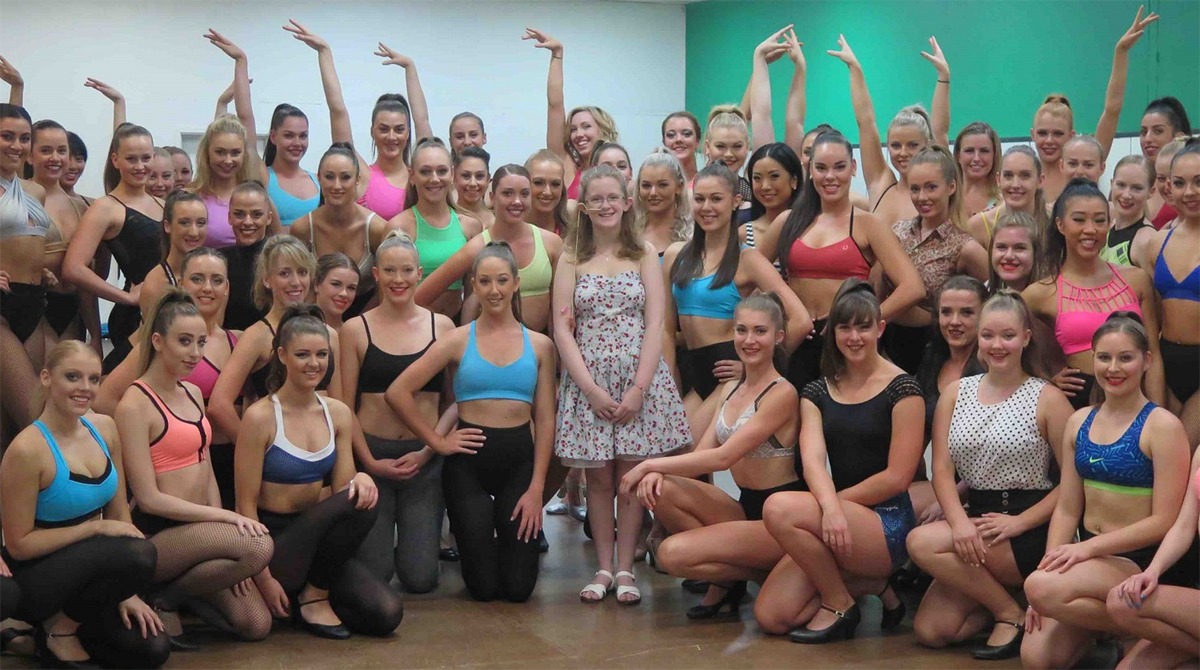 Melbourne’s Bek Goldsmith has been in love with moving and performing for her whole life. As a toddler, she took callisthenics lessons and throughout primary school devoted all her time to whatever performances opportunities came her way: productions, choir and the Young Australian Broadway Chorus.

I met the young musical theatre performer at the recent auditions for Norwegian Cruise Lines. The American company had invited Goldsmith along as a guest, to watch the dance auditions and experience the industry behind the scenes.

Seeing her speak about her love for the theatre, it’s clear how strong her passion is. “I enjoy all of it,” she says. “Except doing auditions — they’re not fun — but I love everything else: rehearsals, performances and everything in between. I love the costumes, I love the makeup, I love the hair…”

Like most young performers, the 17-year-old would prefer to be practicing her craft 24/7, but she’s had to make some major sacrifices.

Goldsmith lives with a rare liver disease called PSC: Primary Sclerosing Cholangits. It’s a disease that many people haven’t heard of, and one for which there is currently no cure, and no known cause.

Diagnosed before her first birthday, Goldsmith has been in and out of hospital most of her life, and underwent a live-saving liver transplant at the age of 13.

“Before my transplant, I was very yellow from jaundice, and I was very itchy as well,” she explains. “I get tired very easily, have stomach pains and nausea, I can’t eat much – that’s why I have a tube in my nose, so I get fed overnight.”

As a young girl, Goldsmith’s condition forced her to give up callisthenics. “She recognised herself that she wasn’t going to be able to do school and an after-school activity,” says her mum, Kerrie. “It was just beyond her energy levels.”

PSC is immune-mediated, which means that the body attacks itself. It causes scarring and hardening of the bile ducts, which can lead to cirrhosis and liver failure.

“The last four months before she received her precious gift of life, she was pretty much living in the hospital, hooked up to multiple infusions, on medications every hour day and night, vomiting several times every day,” Kerrie explains. “To walk even the five or so meters to the toilet was a completely exhausting activity that required her to be on high flow oxygen and have someone help her. In the weeks before her transplant, her ‘physio’ was simply to lift her leg a number of times while in bed, and move her arms.”

Following her transplant and faced with complications, Goldsmith took awhile to recover but eventually went back to school and started to get into activities again – until she fell ill. Unfortunately, with PSC, there’s a chance that it will affect the new liver after a transplant, and there are many “add-ons” to the disease as well.

“Her newest symptom is that she’s got neuropathy, so she can’t feel her feet very well,” says Kerrie, before adding with a laugh: “She came home from dance last night and said, ‘I had to keep looking down because I wasn’t sure where my feet were!’”

Goldsmith is well enough now that she takes ballroom dancing lessons and gets involved in any production she can. Her first, in 2014, was Hairspray, and she’s currently working on Wind in the Willows. Although she still continues her education via online portals, it’s the productions that she loves and that keep her going. Even so, she needs to monitor her energy levels and can often be found napping between afternoon and evening shows.

“I’m either on stage, happy as can be, performing, or I’m backstage sleeping,” she says with a smile.

The main hurdle with PSC is that so little is known about it. PSC is not “big enough” to get government funding to research for a cure. Currently, all the research is funded by a small group of volunteers called PSC Partners, which have become like a strong family network for those affected by the disease.

“Sometimes a research project funded by an organisation like PSC Partners can bring enough evidence to attract some government funding to expand the project,” says Kerrie. “PSC Partners are an international not-for-profit organisation that is US-based. PSC Partners has been running over 10 years and is small in comparison [to other organisations], but holds an annual conference in the States that attracts nearly 300 people. Internationally, it’s not the only funding group for research, though it is one of only a few, and well recognised by the medical community in the US.”

Goldsmith and her mum urge readers to visit the PSC Partners website, learn about PSC, think about donating and look at other ways of helping. Most of all, they want to raise awareness for a disease that most people haven’t heard of, but thousands worldwide are affected by.

“People hear a random three letters and it doesn’t really mean anything,” says Kerrie. “They don’t think about the effects that it can have.”

And it’s not just PSC we need to talk about, but organ donation in general, adds Bek: “Everyone thinks ‘it’s not going to be me that dies young’ – no-one ever thinks that, but it could be you, you just don’t know.”

As a passionate young person for whom hospital has become a “second home”, Bek faces greater obstacles than most, but she is not alone. We can all learn from her determination and her outlook on life.

“Do what you can. Don’t give up. I love performing and want to do it for my entire life, but I’m not dreaming of being on Broadway. You can still dream big and you can still keep doing it, just do what you can today. Tomorrow will take care of itself.”

For more information on PSC and what you can do to help, visit pscaware.org and www.facebook.com/PscPartnersSeekingACure.