From her office overlooking the Swan River in the world’s most isolated capital city, Wendy Martin contemplates her new commission as Artistic Director of the Perth International Arts Festival. “The most important thing for any festival is the place in which it happens and who the community are in the place it happens,” she begins. “What are their stories? What’s the situation in the place? What else happens year-round?”

With 800 artists set to descend on the city in the new year, Perth is readying itself for its 64th annual fiesta of theatre, music, film and, of course, dance. Indeed, for Martin, the dance component is absolutely pivotal to the soul of the festival, capturing as it does her desire to challenge and to place everything within an avowedly contemporary context.

“If you look at Western Australia, there are certain things that you want to explore,” she elaborates. “You want to examine our position in the world, our nearest neighbours, the incredible environment. But also, I was really keen to invite artists who, through their work, are exploring big ideas.” 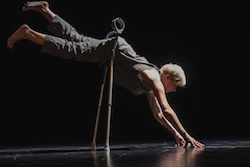 Claire Cunningham’s ‘Give Me A Reason To Live’. Photo by Hugh Glendinning.

On a dance roster that includes the likes of Sidi Larbi Cherkaoui, Aditi Mangaldas and Compagnie 111, big ideas are thick on the ground.

“If you look at the dance programme, all the choreographers are exploring some of the big issues affecting us all now, and so there’s sort of a strand around empathy running through it all,” Martin explains.

This idea is perhaps encapsulated in the form of the festival’s Artist In Residence, Glasgow’s Claire Cunningham, a performer who has spent her life on crutches since the age of 14. Her two works, Guide Gods and Give Me A Reason To Live, explore the relationship of disability to the broader community and culture. As Martin says, “In her first piece she explores the perceptions of people from the major world faiths around disability, and her second piece centres around empathy.”

Indian choreographer Aditi Mangaldas takes that notion and maps it onto the issue of women’s rights and sexual violence.

“She’s considered quite a maverick in her country because one, she combines contemporary dance and Kathak, the classical Indian physical language, but also because this work is inspired by the story of the young woman who was gang raped and left for dead on a bus in New Delhi,” Martin explains. “It’s not a narrative but an emotional response to that event and a response to the way that that event galvanised forward thinking people to get on the street and demand women’s right and to speak out against violence.”

It all makes for a richly textured discourse, one facilitated not by politicians, corporates or dead gurus but by living artists. For the Perth Festival’s new director, this is much more than a banality of circumstance.

“Artists are the visionaries who look at our world and play it back to us,” she contends. “They respond to the world on our behalf. So, I really want artists who are engaging with the contemporary world, with now.”

Of late it’s been hard to avoid the destructive role of religion in the zeitgeist, whether it’s radical Islam, extremist Hindu or even the violent fringe of Buddhism; and for Belgium’s global dance star, Sidi Larbi Cherkaoui, the furore around faith is fertile ground.

According to Martin, “His piece is an argument for diversity and difference; because really, all the great religious books, whether it’s the Qur’an or the Bible, they’re about human goodness. It’s only when people misinterpret those texts that problems come about. So what Larbi’s done is to perform alongside a classically trained Japanese dancer and French circus artist, and by putting these three very diverse dance languages together he’s saying ‘they’re same/same but different’ and they work well together side by side.” 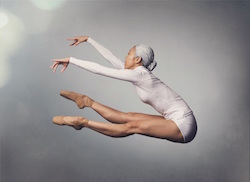 Ballet at the Quarry. Photo by Robert Johnson.

Aside from grappling with “issues” Martin has consciously programmed dance makers who will challenge and perhaps confront Perth audiences.

“Everybody understands ballet,” she says, “You know, they can see the virtuosity and technique, and it’s often based on stories they might know, but contemporary dance is therefore very challenging for many people. I’m challenging the idea that contemporary dance is difficult because I’m saying that these artists are the best, and if you can just relax into it you will see what they’re saying.”

Any serious arts festival will look to stretch its audience. It is not the role of such festivals to pander to a dumbed down TV mainstream. Rather than being a form of snobbery, this is a serious statement of faith in the idea that artists can and do change our view of ourselves and the world we share. In this framework, art is an active ingredient in the social mix.

Relating this back to her dance programme, Martin states, “I believe that these pieces are very clear in their intent and also deeply emotionally engaging. I think also that you could describe all the dance artists we’ve got as activists; like Lia Rodrigues from Brazil, who set up her dance company in the largest and poorest favela in Rio, and she’s changed people’s lives by giving them training and taking them out into the world and exploring big ideas with them.”

For those in the west, PIAF16 is an invitation to take on all this complexity head on. For WA’s dance community it will surely be a feast of provocation, passion and purpose. Relevant much?